Description:
The Mint Act of 1890 allowed for change of coin designs every 25 years, and the dime, quarter, and half dollar were eligible for a redesign in 1891. An initial competition to come up with a new design was opened only to 10 eminent U.S. sculptors, but when those invited presented a list of requirements that included compensation for every entry, whether selected or not, the Treasury decided instead to open the contest to the general public. Judges for the entries included Mint Engraver Charles E. Barber, Boston engraver Henry Mitchell, and artist Augustus Saint-Gaudens. None of the submitted entries were deemed satisfactory, though; only two of about 300 entries were awarded even an Honorable Mention. Mint Director Edward Leech deemed the competition a Òwretched failureÓ, and assigned to Barber the task of redesigning all the coins that were eligible for a change; which some believe had been Barber’s goal all along.

Barber’s design is said to be modeled after Morgan’s Liberty on the dollar, though Liberty faces to the right rather than left, and her hair is shortened and mostly covered. The reverse is a continuation of James B. Longacre’s “cereal” wreath, used on Seated dimes since 1860, but with slight modifications to the form and arrangement of the plants comprising the wreath. In spite of the brouhaha resulting from the design competition, and the rather prosaic presentation of Liberty, Barber did consider the technical needs of the minting process with his design. The Barber dime (also called Liberty Head dime) has a low relief that was suitable for the efficient production of millions of coins from the high-speed presses of the time; a lesson revisited during the efforts to produce the first High Relief double eagles in 1907, artistic merit notwithstanding. Tens of millions of Barber dimes were produced in the twenty-five years of the series, over a half billion in total.

A couple of well-known stories are attached to the type, both related to the 1894 dime produced at San Francisco. The 1894-S dime is not only the most rare Barber dime, but is also one of the rarest coins in U.S. numismatics. It is believed that only 24 dimes were minted, all as proofs, apparently on the order of San Francisco Mint Superintendent J. Daggett, for distribution to his high-placed friends. But today only 10 (possibly 12) examples are traced from the original mintage, the whereabouts of the others unknown. Superintendent Daggett also gave three of the dimes to his daughter Hallie, who is said to have spent one of the coins for ice cream on her way home from the Mint (the others were sold by Hallie in the 1950s). The “Ice Cream Specimen” is believed to have been found in the late 1950s. Barber dimes and the subsequent Winged Liberty Head (Mercury) dimes were both produced in 1916.

On the obverse Liberty faces right, with tightly constrained hair barely visible below a prominent wreath of laurel that surrounds the base of a freedman’s hat; the wreath is tied at the back by a ribbon. Above the forehead is a small band that displays LIBERTY. Inside the dentilled rim are the words UNITED STATES OF AMERICA at the top, the phrase divided by the top of the wreath, and the date is at the bottom. The designer’s initial B is toward the back of the base of the neck. On the reverse a wreath of two branches of corn, wheat, maple leaves, and oak leaves forms a concentric circle inside a ring of dentils next to the rim, the two branches tied by a ribbon at the bottom. The denomination ONE DIME is in the center, each word on a separate line. Barber dimes were minted at Philadelphia, New Orleans, San Francisco, and Denver; O, S, and D mintmarks are located below the knot of the ribbon bow inside the rim.

Over thirty thousand business strike Barber dimes have been certified, including several prooflike examples. Coins from the Philadelphia Mint are in general more frequently listed than pieces from the branch mints, particularly New Orleans and San Francisco. Prices are moderate for most dates through near-Gem and even Gem, but are significantly higher for many New Orleans and San Francisco issues. Key dates are 1895-O, 1896-S, 1897-O, 1901-S, and the 1903-S, along with the 1893 3 Over 2 and 1905-O Micro O. Approximately 10,500 proof Barber dimes have been certified, with many classified as Cameo or Deep Cameo. Prices are modest to Gem, expensive finer than that, and modestly higher for Cameo-designated pieces. The 1894-S, known only as a proof issue, is a significant rarity, both as a type and within the entire field of U.S. coinage. Prices for this coin are at six figures even as PR60, exceeding one million dollars as Select Proof and finer. The Twenty Cent Piece: One of the Shortest Chapters in American Numismatics 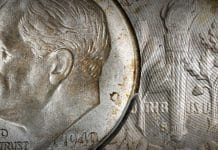