Description:
The silver dollar was authorized by the Mint Act of April 2, 1792, and the denomination was intended to be the standard unit of the American monetary system. Similar in size and composition to Spanish and Mexican dollars, the denomination should have been the ideal unit of commerce. However, the reality was somewhat different, and though used in foreign trade, silver dollars generally did not actively circulate in the U.S. The reasons were basic: the coins were too large and too heavy. In most parts of the country, silver dollars often made a short journey from bank vault to customers as gifts or mementos, and then back to bank vault for safekeeping. Peace dollars were the last silver dollars minted, and after the 1935 issues regular production of the dollar coin ended. However, when a sealed bank vault was opened in 1962 at the Philadelphia Mint, hundreds of thousands of Morgan and Peace dollars were found, including some scarce issues. Both the Treasury and banks freely paid out the coins until they were gone in early 1964. The Coinage Act of July 23, 1965, specified that no new silver dollars could be coined for five years, at which time the need for the denomination would be reevaluated.

That “need” apparently came from a somewhat unexpected source, the Nevada gambling casinos. Though small numbers of silver dollars were often kept as rainy-day money by non-collectors who had lived through the years of the Great Depression and WWII, after silver coins disappeared from circulation in the mid-1960s large dollar-size tokens continued to be used at casinos. Customers, however, preferred the genuine item. The March 1969 death of Dwight D. Eisenhower, the former Supreme Commander of Allied forces invading France and two-term U.S. President, and the 8-day July 1969 historic lunar mission and landing by the Apollo XI crew, prompted an October 29, 1969, House bill that proposed a dollar coin commemorating both events. Following more than a year of debate the new dollars were approved in December, 1970. Circulating Eisenhower, or “Ike”, dollars were to be minted in the same copper-nickel composition of the circulating dime, quarter, and half dollar. Silver-copper clad dollars for collectors, a composition the same as that used for the 40% silver Kennedy half dollars produced from 1965 through 1970, were also approved.

The obverse of the new dollar featured a portrait of Eisenhower, the reverse a slightly modified copy of the scene used on the Apollo 11 crew patch, which shows an eagle landing on the moon. Though seemingly benign, the original depiction of the eagle on the coin was apparently interpreted by the U.S. State Department as bearing a somewhat hostile expression; not the first time in U.S. coinage history when a design has received unexpected criticism. More controversial was an amendment to the authorizing legislation that directed a portion of the profits from the collector coins to the private Eisenhower College in Seneca Falls, New York. In spite of receiving approximately $9 million from this provision, the College closed its doors in 1983, after being in operation only since 1968. Because of a desire to produce the dollars quickly, Chief Engraver Frank Gasparro prepared the design, having already started the process in anticipation of the coin’s approval; though for unknown reasons the first dollar coins were not issued until November 1, 1971. The reverse design was modified for the 1976 Bicentennial year, as were those for the quarter and half dollar, but with production starting in mid-1975, no 1975-dated dollar coins were produced. The dollar returned to the original design for 1977 and 1978, the latter the final year of the type.

A left-facing portrait of Eisenhower is centered on the obverse; Engraver Frank Gasparro’s initials FG are on the truncation of the neck. LIBERTY arcs above the head, concentric with the flat rim, and the date is similarly placed at the bottom. IN GOD WE TRUST, in two lines, is at the bottom left. Ike dollars were minted at Philadelphia, Denver, and San Francisco; D and S mintmarks are below the neck, above the date. Bicentennial dollar coins have the dual date 1776-1976 at the bottom, the dates separated by a centered dot.

The reverse depicts an eagle with outstretched wings landing on the cratered moon, shown in part on the bottom third of the coin. The eagle clutches an olive branch in its claws. UNITED STATES OF AMERICA curves inside the rim at the top, over the blackness of space; ONE DOLLAR is at the bottom along the rim, superimposed over the moon. Circling around the eagle against the space backdrop are 13 small five-point stars. Above the eagle, below the stars, is E PLURIBUS UNUM in two lines with centered spacing dots; a small representation of earth is in space above and to the left of the eagle, below the stars. The designer’s initials FG are between the eagle’s tail and the tip of the olive branch. The Bicentennial version replaces the center image with the Liberty Bell in front of the whole disc of the cratered moon. E PLURIBUS UNUM, each word on a separate line, is located at the lower right of the bell/ moon composite. UNITED STATES OF AMERICA and ONE DOLLAR along the rim are separated by centered five-point stars. The initials DRW, for reverse designer Dennis R. Williams are below the bottom edge of the bell, to the right of the clapper. 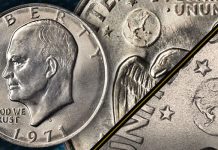