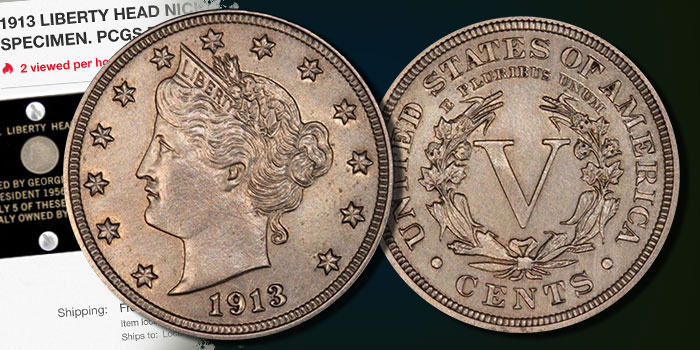 You just don’t see this every day.

The Walton specimen 1913 Liberty nickel is available for sale on the internet auction site eBay. Certified Proof 63 by PCGS and authenticated in secrecy at a midnight meeting in 2003, the coin was later purchased in 2013 at a Heritage auction at that year’s Central States Numismatic Society Convention. The buyer, Larry Lee of Coin and Bullion Reserve of Panama City, Florida, paid $3 million USD for the nickel ($3,172,500 with buyer’s premium). In an interview with CoinWeek at the time, Lee stated that he would hold on to the coin for at least three to five years before attempting to sell it.

Earlier this year, Lee sold the coin to one Martin Burns (and his brother). Mr. Burns is the seller (vegaspackages) responsible for the current listing.

The Walton specimen is one of only five 1913 Liberty nickels in existence. At one time, all five coins were owned by Eric P. Newman and his mentor and partner B.G. Johnson. North Carolina collector George O. Walton purchased the example that would come to bear his name in 1945. Constantly on the road due to his job as an appraiser for banks and estates, Walton had access to many rare, high-quality coins not readily available on the market. He also enjoyed bringing his prize specimens along to coin shows as he traveled and letting others share in the excitement.

Sadly, Walton died in a car crash in 1962, on his way to display the 1913 Liberty nickel at yet another show.

For many years, the American collecting community assumed that the 1913 nickel recovered in the crash was an overdate replica, and so the coin was tucked away in the closet of one Melva Givens, the sister of George. Decades passed, and the Walton specimen became known as the “Lost” 1913 Liberty nickel. In the early 2000s, Collectors Universe publicly offered a million-dollar reward for information on its whereabouts, and soon Givens’ adult children took the piece to the 2003 ANA convention. As mentioned above, several coin experts attended a private meeting to compare the nickel to the four other known examples; it was declared genuine.

After a few more rounds of authentication, the Walton 1913 Liberty nickel was sold for $3 million at the Heritage auction in 2013. With permission from Walton’s heirs, PCGS inserted the certification sticker inside the custom holder Walton himself had built for the coin.