The 13 “late date” With Motto New Orleans Liberty Head eagles struck from 1888 to 1906 are a popular subset for collectors. None of these issues are rare from an absolute sense, and a decent set of Uncirculated graded coins (MS60 to MS62) is completable for under $25,000.

In the higher Uncirculated grades (MS63 and finer) these coins represent a different story. With the exception of the 1901-O, 1903-O, and 1904-O, all of these dates are scarce in MS63 and many are unknown or virtually non-existent in MS64 and finer.

As with all larger-sized US gold coins struck after 1880, the collector needs to ask: Is this date safe from the possibility of a sizable quantity being located overseas? I’ll attempt to answer this question.

The following chart lists the various late-date New Orleans eagles along with their PCGS populations (as of 7/2021) in MS63 and higher grades: 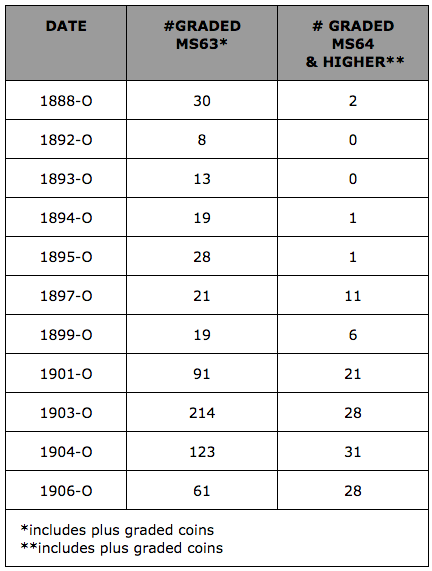 This chart tells us a number of interesting things about these late-date eagles from New Orleans.

The first is that the 19th-century issues are far scarcer in MS64 and higher than their counterparts from the 20th century. There is an obvious reason for this: the earlier issues have lower mintages. But I feel there may be another reason. Having carefully studied overseas hoards that have re-entered the American market in the past 30+ years, I constantly note that the three common dates of this series (1901-O, 1903-O, and 1904-O) typically have a different appearance than the earlier dates. The color is different and there tends to be a lot more dirt on the coins in addition to less abraded surfaces. Is it possible that by 1900, eagles being shipped overseas were shipped more carefully? Were they wrapped in rolls as opposed to being sent loose in bags as the earlier issues clearly were? Whatever the reason(s), it is safe to assume that there will be small numbers of these three dates (plus the scarcer 1906-O) located in MS64 and even MS65 grades. Getting back to the original point of this blog, why do I feel that high-grade late dates are a “safe” purchase? Based on millions of repatriated US gold coins, we now know that the 1888-O through 1899-O eagles coming from overseas are (invariably) heavily bagmarked MS60 to MS62 coins. I have either owned/sold or seen virtually every 1888-O through 1899-O eagle ever graded MS64 and higher by PCGS and it is my opinion that, with few exceptions, all of these coins came from domestic sources; in other words, they were coins that escaped being shipped overseas. A few, like the Eliasberg/Clapp PCGS/CAC MS67 1897-O, the Eliasberg/Clapp PCGS/CAC MS68+ 1899-O, and the PCGS SP68 1904-O, are “unicorns” (the term I use for amazing coins that shouldn’t exist; in the case of the first two in this group, these were obtained directly from the Mint at the time they were issued). 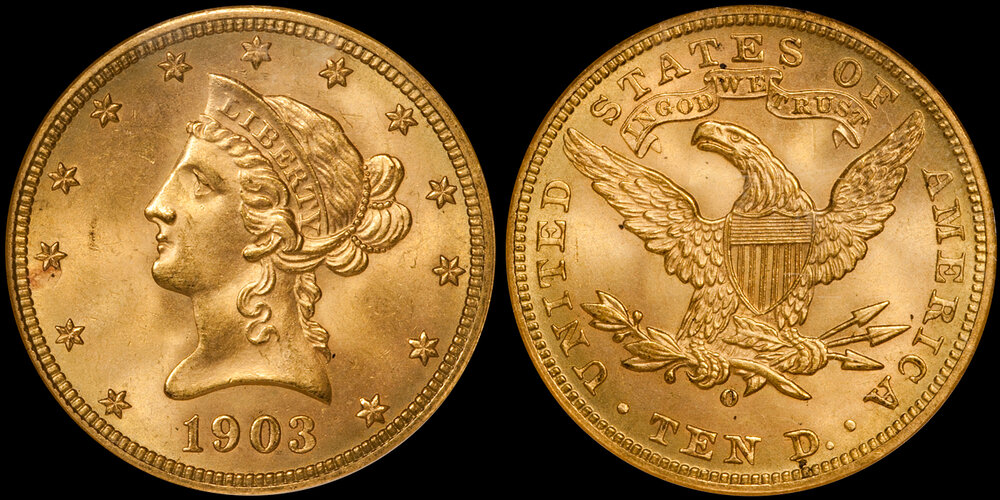 The populations for MS64 20th-century dates will slowly increase but this is more due to gradeflation than it is to significant numbers of very choice coins being located. And, in my opinion, the number of MS65s, even for the most common dates, is likely to remain very low. At current price levels (the current PCGS Price Guide suggests a value of $20,000 for a 1903-O in MS65 and $25,000 for a 1904-O in MS65), I think these coins are reasonably priced. How about dates like the 1892-O, 1893-O, and 1894-O in PCGS MS63? Are they safe? I think they are, especially if the coin(s) are nice and original and preferably with a CAC sticker. These three dates are currently valued in the $6,000-9,000 range for very nice PCGS MS63 coins, and I think they are fairly priced, given their relative popularity. The two dates I’ve seen more nice coins for than one might expect are the 1899-O and the 1906-O. Both saw significant jumps in price in MS63 and MS64 in the last few years and they might actually drop in price in the coming years unless demand picks up for them.

That said, I’m still a buyer of both dates so long as they are solid for the grade.

DWN can be reached via email at [email protected].