2022 was definitely a quieter year for U.S. Mint coins, especially compared to last year – a banner year for the Mint in terms of sales and one marked by several historic developments such as the new American Silver and Gold Eagle reverses and the return of Morgan and Peace silver dollars.

Arguably the biggest news of the year related to the United States Mint was the ongoing shortage of silver planchets, especially those needed for the bullion versions of the Silver Eagle, which resulted in much lower production of those coins compared to last year and relative to the high demand for the coins. There is little doubt that if more coins could have been struck, they would have been purchased quickly, helping to address the current market shortage. The planchets must be struck to the exacting standards that the Department of the Treasury requires, especially regarding silver purity and weight. That is believed to currently be provided primarily by just one company: Sunshine Minting (with some also coming from Leach Garner). And Sunshine also has other contracts to provide silver planchets and produces its own products.

This situation has pushed the market premium for these coins to what is likely the highest level ever seen for raw Uncirculated specimens, which currently sell retail for at least $40, or twice the current spot price. In 2011, the coins sold briefly for over $50, but that was because of the record-high spot price of silver at the time.

And because of the current shortage of coins on the market, large bullion dealers who are unable to obtain enough coins for their customers from the U.S. Mint have been offering to buy them from the public for $10 over spot for random dates to about $12 over if they are current year coins. If your local dealer is still paying half that, sell them somewhere else.

Some dealers have offered to exchange customers’ Silver Eagles for other bullion coins, which would result in the customer ending up with more ounces of silver.

As for collector coins and circulating quality coins sold by the Mint at a premium, the American Women Quarter series has been the surprise hit of the year, with subscriptions for roll sets being in most cases sold out almost the entire year.

Buyers continue to pay about $150- $200 for the three-roll sets (or three to four times the issue price of $54) that include a roll each of Mint State coins from the Philadelphia, Denver, and San Francisco Mints, which are the only way to obtain the “S”-mint coins that are shaping up to be some of the lowest-mintage circulating-quality coins issued in many years.

With subscriptions for the three-roll sets selling around 7,600 units each because they were limited to that amount, mintages for the 2022-S quarters will be only around 300,000 each. That is roughly half the mintage of even the lowest mintage America the Beautiful S-mint issues that were also only sold as part of three-roll sets.

Earlier this fall, the three-roll subscription briefly opened back up, and your columnist quickly added that to his subscriptions. Many collectors who saw the notice were doubtful they would ever see the coins, but mine shipped recently.

As Mint officials explained to me earlier this year, demand for the coins outstripped their projections, adding that the coins became popular because of the mainstream coverage they received and continue to receive combined with the fact that they are being bought and collected by people new to the hobby – including many females and younger collectors.

But many veteran collectors (who in some cases were also not very excited about the new series) argue that speculation is driving this market. It is hard to say with certainty what role this is playing, but the fact remains that buyers are still willing to pay strong premiums for the rolls, especially the three-roll set.

In 2020, the U.S. Mint issued its first partially colorized coins ever – a half dollar and a silver dollar for the Naismith Memorial Basketball Hall of Fame 60th Anniversary program. The half dollar featured an orange basketball and a silver rim, while the dollar has a red rim and black ribs on the ball. Neither was a sellout, with collectors expressing mixed opinions about the use of color on our coinage. 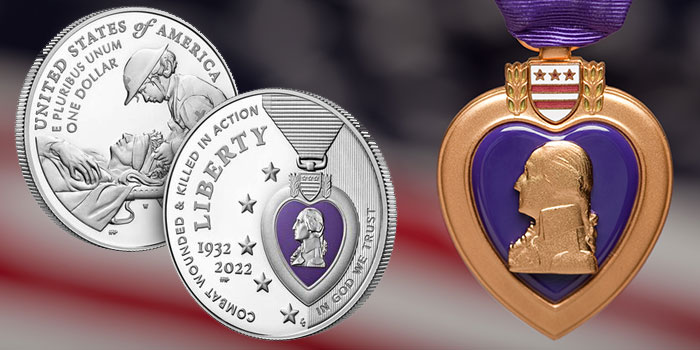 Things were different this year when a partially colorized silver dollar was issued on March 24, two months after the release of the regular coin. The coin features the same strong design as the regular Purple Heart silver dollar by well-known medallic sculptor Heidi Wastweet, whose obverse features the medal itself with a left-facing bust of George Washington against a purple background. The reverse – also designed by Wastweet – shows a World War I-era military nurse tending to a wounded soldier whose head is wrapped in a bandage. The color in this case makes the medal stand out and adds something the regular coin does not have.

While collectors of American coins seem mostly not to want coins with full color like numerous issues from the Perth Mint or the Royal Canadian Mint, for example, coins with tasteful use of color in selected areas that have good designs like this one does resonate with a lot of collectors.

The piece sold out of its 25,000 mintage within a week of its release and demand for the coin is clearly greater than that supply since secondary values are holding steady at about 50% over its issue price of $95 for raw coins and close to $300 for Proof 70 examples, with first-day issues bringing even more.eBay auctions vary as there is the occasional sale for about $200.

After last year’s fast sell-out of the American Liberty $100, one-ounce gold Proof coin with its dramatic and highly original design of a bucking bronco, expectations for a sell-out of this year’s silver version that was priced at $75 were high. First-day sales accounted for about 40,000 of the maximum mintage of 75,000 medals with 5,000 of those from in-person sales at the summer ANA World’s Fair of Money in Rosemont last August and some from bulk dealer sales. Cumulative sales are currently at 57,326 units sold. Sales slowed most likely because dealers and flippers saw that the issue did not sell out right away. Those who bought a lot of them and had them graded have done well, with Proof 70 specimens selling for over $200 and more for special labels – but getting the top grade on this one has not been easy.

Some larger buyers who sold early made about 25% over the issue price, but overall, this is a medal that is more significant for its stunning art than for its price performance.

The final winner was this year’s Proof American Gold Eagle coins, including the four-coin set and individual coins that went on sale on March 17. For those with the resources to purchase them, there were opportunities for quick profits by selling to large dealers who couldn’t get as many coins as they needed from the Mint, who offered a premium over the issue price. Dealers mainly want the coins to have them graded since Proof 70s sell for a solid premium over raw coins.

Almost every version of this issue came close to selling out of its maximum authorized mintage during the first day or a couple of days of sales; the four-coin set became “currently unavailable” within minutes. Small quantities of these coins became available later before all sold out.

As 2023 approaches, the U.S. Mint has already posted its product schedule for the new year whose most notable features are, first, the fact that for the first time since 1982–when the modern commemorative coin program began–no commemoratives will be issued unless somehow one of the many pending bills in Congress manages to get the needed two-thirds support to have a vote on the program, which seems unlikely in this election year.

The other point is that there are not a lot of programs that stand out from the usual American Silver, Gold, Platinum, and Palladium Eagles, annual sets, and the second year of the American Women Quarters program–which will include coins for Eleanor Roosevelt designed by former lead sculptor-engraver at the Mint Don Everhart–in the summer that are sure to be popular.

Two main ones to keep an eye out for are the return of the Morgan and Peace dollars starting with the Uncirculated issues in the summer and the Proofs and two-coin Reverse Proof set in the fall plus the new American Liberty Proof gold coin and accompanying silver medal in the summer. I have suggested to Mint officials that they also issue a $10, tenth-ounce gold version as was done back in 2018, but so far that has not happened. Sales of the larger gold coin have lagged in recent years (except for the 2022 issue) mostly because the combination of a spot price close to $2,000 and the premium added to coins puts them out of reach for so many buyers.

To your columnist, the main takeaway from 2022’s U.S. Mint offerings is that we are in a period when the opportunities for making money on these coins are few and far between unless you are a good-size dealer, which is not surprising.

After all the criticism the Mint received for the high-roller coins of the David Ryder years at the Mint (like the V75 Eagles and the 2019-S Enhanced Reverse Proof Silver Eagle), officials there have been working to tamp down speculative fervor for Mint coins.

And this trend just reinforces what veteran watchers of the modern coin market have always said, which is that these coins should be above all enjoyed for their art, the resonance of their themes for the buyer, and for fun rather than profit.