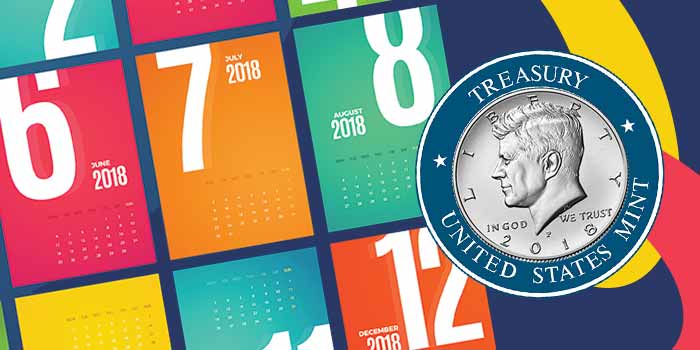 Over the weekend, the United States Mint added several new items to their official release schedule for 2018.

The Mint has two products scheduled for release in july. The 2018 American Gold Eagle one-ounce Uncirculated coin goes on sale July 12. Like the Proof version, the Uncirculated Gold Eagle is struck in 22-karat gold at the West Point Mint and features a rendition of Augustus Saint-Gaudens’ classic design for the $20 double eagle on the obverse. A family of bald eagles designed by sculptor Miley Tucker-Frost (née Busiek) resides on the reverse.

August 14 sees the release of the 2018 American Silver Eagle One Ounce Proof. Per usual, the coin features an adaptation of Adolph Weinman’s Walking Liberty on the obverse and John Mercanti’s heraldic eagle on the reverse.

The U.S. Mint begins its new silver presidential medal program on August 16 when it issues the George Washington and John Adams Silver Presidential Medals. Announced in January of this year, the program will be struck on Silver Eagle planchets and feature renditions of historical presidential medals.

Rolls and bags for the Cumberland Island National Seashore America the Beautiful quarter come out on August 27, with the five-ounce silver bullion coin available for order on August 30.

Finally, A date has been set! The 2018 American Eagle One Ounce Palladium Proof coin goes on sale September 6. The obverse features an adaptation of famed American sculptor Adolph A. Weinman’s ‘Winged Liberty’ as found on the classic Mercury dime, while the reverse features his design for the reverse of the 1907 American Institute of Architects (AIA) gold medal. Each coin will consist of one Troy ounce of .9995 fine palladium and have a face value of $25.

And of course, there are a few items yet to be released in June.