On August 14, the United States Mint will release a Reverse Proof version of the introductory American Innovation $1 coin. Struck at the San Francisco Mint, the new coin will come with a special four-panel envelope package and a certificate of authenticity.

A mintage and product limit of 75,000 will be in place, as will a limit of five orders per household. 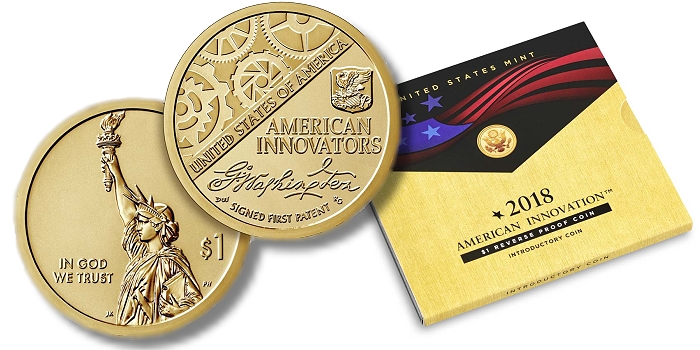 Regular Proof and Uncirculated versions of the introductory coin to the 15-year American Innovation dollar series came out on December 14, 2018. The Reverse Proof coin features a rendition of the Statue of Liberty, which is the obverse design common to all entries in the program. As mandated by law, the reverse of the introductory coin features the signature of the first President of the United States, George Washington, who in 1790 signed the first patent ever issued under the then-recently adopted U.S. Constitution. An interesting not-quite-half circle design consists of a handful of stylized gears.

From 2019 through 2032, four coins will be released each year representing every state, district, and territory according to the date each state adopted the Constitution, with the District of Columbia and the five U.S. territory coins being issued last. Each reverse will be unique, epitomizing an innovation or innovator from a respective state or territory.

The Mint has yet to set a date for the release of products concerning the first four states (Delaware, Pennsylvania, New Jersey, Georgia), though they are listed on the Mint’s 2019 Product Schedule.

The program serves as a replacement for the Presidential $1 coin series, which ended its first run in 2016 with the Ronald Reagan Presidential dollar. Native American $1 Coins, however, will continue to be produced alongside the new series.

Of course, a Reverse Proof finish means that the polished and frosted areas of a Proof finish are reversed. Whereas on a regular Proof version of the American Innovation $1 coin the fields are carefully struck and polished to a mirror-like finish and the design motifs and inscriptions are frosted, on a Reverse Proof dollar the fields are frosted and George Washington’s signature, the inscriptions, and the Statue of Liberty are given a mirror-like finish.