It would have to be exciting to stand at a podium in front of a room full of people and sell some of the rarest numismatic items ever offered for sale.

Even more thrilling would be to sell two items for world record prices in one night.

He describes what it is like to be part of numismatic history. 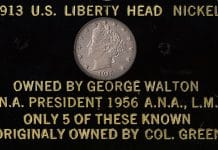