Wolfgang Amadeus Mozart’s (1756-1791) impact on Austrian culture is just as vital today as it was when the young prodigy took the Viennese opera scene by storm at the age of 16 when he composed his first opera, “Bastien und Bastienne”. To celebrate his musical genius, The Austrian Mint will issue a three-coin silver coin series entitled, “Wolfgang Amadeus Mozart: A Life in Three Acts.”

Each coin will be struck in .900 silver and carry a 20-euro face value. The first coin in the series will be issued in September 2015. Coins two and three are scheduled for release in 2016. 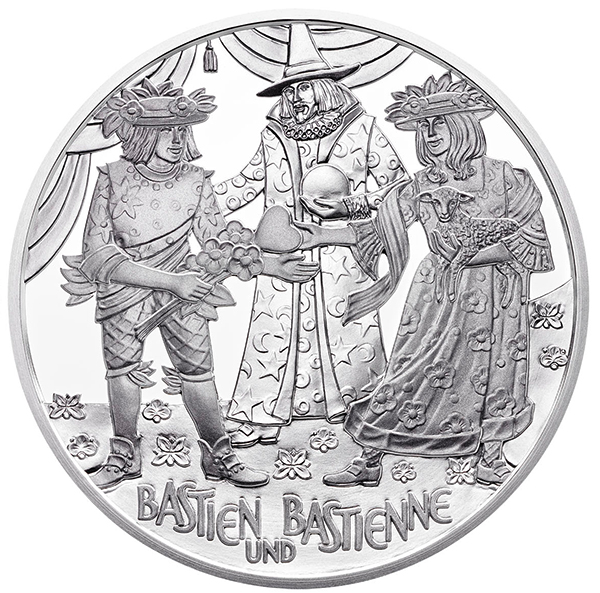 Obverse: A young Mozart, dressed in formal attire, leans to the right and is front facing. Extra care was taken to capture the young prodigy’s sense of style, especially in the lace cuff and neckline. At Mozart’s torso is the first part of his signature “Wolfgang,” rendered in mirrored incuse. Underneath the signature is the date: 2015. Canted to the left and wrapping around the rim is the inscription REPUBLIK ÖSTERREICH. Behind Mozart’s head is a line of score with three notes visible on a clef. Below this is the denomination 20 EURO.

Reverse: Three standing figures. In the exergue, written in whimsical fashion, the name of the opera BASTIEN UND BASTIENNE. On the left is Bastien and on the right is his love Bastienne. In the center is a magician, whose spell brings the two together. Bastienne holds in the croak of her left arm a lamb. In her right hand a heart that she extends out towards her love Bastien. Bastien holds in his right hand a bouquet of flowers and extends his left hand to accept Bastienne’s love. A theatrical curtain is visible behind the three figures, who are standing on a gently sloping hill filled with flowers.