In 1908, Emperor Franz Joseph I had been on the throne of the Austro-Hungarian Empire for 60 years – an almost miraculously long reign (though not unfamiliar to Europeans of the time, since Queen Victoria of Great Britain had only recently passed in 1901). To commemorate the occasion, the Austrian Vienna Mint struck 16,000 gold 100 kronen (100 korona or corona in Hungary) denomination coins in both regular and Proof strikes. It features a wondrously detailed right-profile portrait of the emperor on the obverse, but what is especially noteworthy about the issue is the absolutely gorgeous artwork on the reverse, which the coin bore for only one year.

For one example of this gloriously beautiful design, designed by master Viennese artist Rudolf Marschall, check out this gem uncirculated example available at Gorny and Mosch’s online store at MA-Shops.com. This coin consists of over one Troy ounce (33.8753 grams) of .900 fine gold and has a diameter of 37 millimeters. Surrounding the portrait of Franz Joseph I, and rendered in an ornamental font reminiscent of Art Nouveau and the Vienna Secession movement, is the abbreviated Latin inscription FRANC·IOS·I·D·G·R·IMP·AUSTR·REX BO·GAL·ILL·ETC·ET AP·REX·HUNG·, which stands for “Franz Joseph I by the Grace of God Emperor of Austria King of Bohemia, Galicia, Illyria, etc and King of Hungary”.

The reverse features the dates 1848 and 1908, the bookends of Franz Joseph’s reign. The denomination is abbreviated as 100 COR. on the right side. The embodiment of Fame, facing to the left, is dressed in classical garb as she reclines on a cloud. She extends a laurel wreath in her right hand all the way to the edge of the coin, and rests her left arm on a shield featuring the double-headed eagle of the coat of arms of Austria-Hungary. The Gorny and Mosch specimen discussed here seems to exhibit some die doubling around the lady’s face. She is backlit by the rays of the sun. In the clouds is the Latin inscription DUODECIM LUSTRIS GLORIOSE PERACTIS, which translates to “Twelve glorious seasons (lustrae, or periods of five years) passed”.

A ring of minuscule dots or beads encircles the design on each side.

Franz Joseph I was born in 1830 and became Emperor of Austria and King of Hungary at the age of 18 in 1848. His long reign witnessed much of the history that shaped what we now consider the Modern Industrial World, from the U.S. Civil War to the Age of Imperialism and on into the 20th century. Franz Joseph died in 1916, in the midst of the First World War. 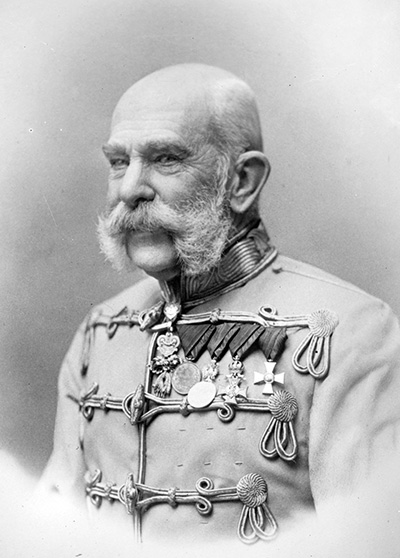 He was trained from an early age to assume the throne, even becoming an officer in the Austrian military at 13 years old. Considered by the Empire’s military elite to be a better choice for ruler than his uncle Ferdinand, the current emperor, or Franz Joseph’s father Franz Karl, he ascended to the throne upon his uncle’s “resignation”.

Like many newly ensconced rulers (especially young ones), he soon faced challenges to his rule and territorial integrity from sources both foreign and domestic. Over the course of the 19th century, Franz Joseph maintained himself and Austria as respected figures on the world stage, even if his policies were not always successful.

In 1914, his assumptive heir, Archduke Franz Ferdinand, was assassinated in Sarajevo, which led to the outbreak of World War I as the “entanglement of alliances” swiftly drew all the major powers of Europe into conflict against each other. Franz Joseph, who by that time was 86 years old, could do little more than watch as the Austro-Hungarian Empire was torn apart. He died two years later. Rudolf Marschall made his death mask.

Renowned sculptor Rudolf Ferdinand Marschall was the royal medalist to the court of Austria. Born in Vienna in 1873, Marschall was the precociously talented son of an engraver. After apprenticing under his father, Marschall attended the Vienna Academy of Fine Arts, winning several awards while still a student. Upon graduation, he quickly earned his position as a major player in the Vienna art scene and found his métier in portraiture on plaques and medallions. One such medallion, and one which gained him much fame around the world, was a medallic portrait of Emperor Franz Joseph I produced in 1900 to celebrate the emperor’s 70th birthday. It bore the same highly detailed, true-to-life right-profile portrait as the 1908 gold 100 corona.

The 1900 Franz Joseph medal then won him many international commissions, including several from the United States and the American Numismatic Society (ANS) in particular. Marschall is also known for his Art Nouveau glassware.

He became head of the Master School for Engraving and Medal Making at the Vienna Academy in 1904, a position he held until removed by the Nazis in 1938. Marschall retired in 1944, and died in his home city in 1967.