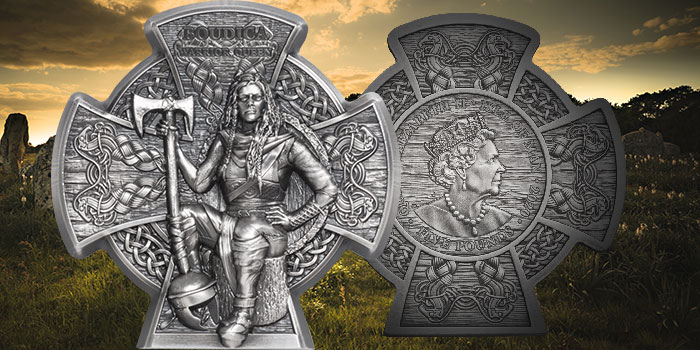 One side is dedicated to the Celtic queen Boudica: it depicts the queen with an elaborate braided hairstyle in front of a Celtic cross sitting on a wooden stump, a battle axe in her right hand, the left on her hip, a helmet at her feet. Above, the inscription BOUDICA / WARRIOR QUEEN.

The other side features a portrait of aged Queen Elizabeth II, around it the inscription QUEEN ELIZABETH II ISLE OF MAN 2020 / FIVE POUNDS, in the hub of a wheel cross or Celtic cross. The arms of the cross and the circle around it are decorated with Celtic interlacing patterns.

In 2019 the Isle of Man dedicated a spectacular commemorative coin to its eponymous hero, the divine warrior king Manannán. In 2020 this series is continued with Celtic warrior queen Boudica, whose story is known to the whole world today.

Boudica’s husband was the king of the Iceni tribe, who had surrendered to the occupying Roman forces. He had appointed his wife as his successor, but the patriarchally organised Roman administration wasn’t willing to accept that. They attacked the Iceni, flogged Queen Boudica, and raped her daughters.

However, Boudica didn’t surrender to her fate. Under her lead, several Celtic tribes revolted. After some initial successes, which included conquering and burning down the Roman cities of Colchester and London and virtually wiping out two legions, Boudica suffered a crucial defeat. The rebellion collapsed. The ancient sources do not agree on whether the queen committed suicide afterwards or died of an illness.

At least since Shakespeare’s time, Boudica has been a figure of popular culture to whom numerous plays, books and films were dedicated.

CIT Coin Invest commemorates the great ruler, who became a symbol of unbreakable resistance against tyranny, with a spectacular, three-dimensional issue, a miniature sculpture, which can stand upright. Boudica is a historical example for the fact that women can fight just like men if they are driven to.