This, the third issue in the Austrian Mint’s “Austria Through the Ages” series, focuses on the historically-significant Biedermeier period of 1815 through 1848. This was a period of heightened prominence for Austrian style, industry, music, and culture. It was also an era of great historical importance to the European continent as it recovered from more than a decade of war against the French.

In Austria, it was a period dominated by the conservative Prince Klemens Wenzel von Metternich (1773-1859), one of the continent’s most respected diplomats. Under Metternich’s leadership Austria repaired its relations with the French and blossomed industrially and culturally, while Europe came together to set the framework that led to more than 30 years of piece and stability.

Legal Tender in Austria, the 2003 Prince Metternich Commemorative 20 Euro Silver Coin honors the Austrian diplomat and his period. The coin measures 32 mm, weighs 17.3 grams and is made of 0.925 fine silver.

This is a proof-only issue, with a mintage run limited to 50,000 pieces. Original packaging included a plastic coin capsule, which fits snugly inside of a burgundy box. A uniquely numbered certificate of authenticity was also included. Designed by Andreas Zanaschka. The steam locomotive Ajax, which survives to this day and currently resides at the Vienna Technical Museum, barrels along the Austrian countryside. Two figures take in the scenery from an open railcar. REPUBLIK ÖSTERREICH arches around the top rim of the coin, canted slightly to the left. The date 2003 is located on the far left side of the coin, slightly below center. The coin’s denomination is expressed 20 EURO in the coin’s tilted exergue. 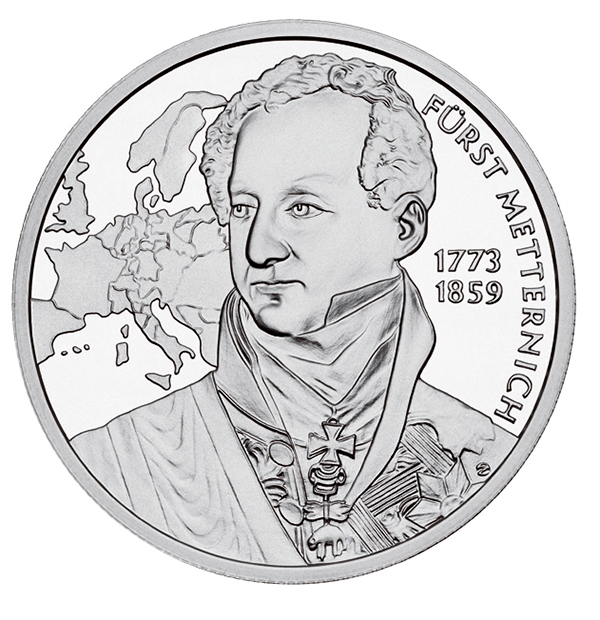 Also designed by Andreas Zanaschka. The reverse features the bust of Prince Metternich, dressed in noble attire. Metternich is wearing the ornate Order of the Golden Fleece Medal and Metternich’s Great Civil Cross of Merit, which he was awarded in 1814 (for his role in arranging the marriage between Napoleon Bonaparte and Austrian archduchess Marie Louise).

In the background, off of Metternich’s right shoulder is a map of Europe, outlined are the countries represented in the Vienna Conference of 1815. To Metternich’s right the dual date 1773 1859 and the inscription FÜRST METTERNICH.