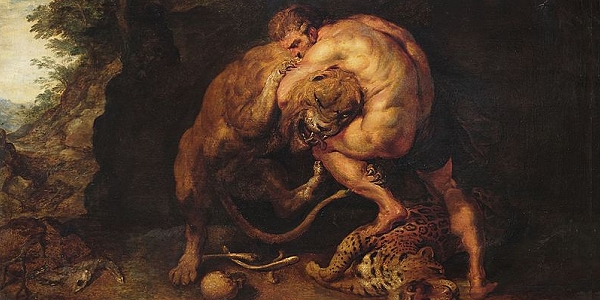 First Release in New Series From Pobjoy Mint Sold Out

Between 1997 and 2002, Pobjoy Mint released an incredibly popular series of £2 Bi-metal coins on behalf of the government of Gibraltar featuring the 12 Labors of Hercules. Pobjoy Mint is pleased to announce the reproduction of this popular series with a very low issue limit for 2020.

The 12 Labors were a series of episodes concerning a penance to be carried out by Hercules, one of the greatest of the Greek Heroes. The Labors were for Hercules to atone after he slew his family. They were accomplished over 12 years at the service of King Eurystheus. Each coin in the series features one of the Labors. Hercules, who was the son of Zeus and a mortal woman, was known for his many adventures which took him to the far reaches of the Greco-Roman World. One cycle of these adventures became known as the “12 Labors” but the list has variations.

Hercules was driven mad by Hera, the wife of Zeus and Queen of the Gods. In losing his sanity he killed his family and was tasked with 12 Labors to expiate his sins.

The first labor given to Hercules was to kill the “Nemean Lion”. He wandered an area until he came to the town of Cleonae. There he met a boy who said that if he killed the lion within 30 days, then the lion would be sacrificed to Zeus. If not the boy would sacrifice himself.

The Nemean Lion was a legendary creature within Greek Mythology, getting its name after ravaging the area of Nemea. The lion had impenetrable fur, which Hercules discovered when he fired an arrow at it; the arrow simply bounced off the creature without causing any harm. Eventually, the lion returned to its cave where Hercules stunned the beast with his club. And using his heroic strength, Hercules strangled the lion. Upon his return carrying the lion on his shoulders, Eureystheus was both amazed and terrified and banished Hercules from ever returning to the city. The King warned him through a herald that each task that went by would become increasingly difficult.

The reverse of the coin is inscribed “The Labours of Hercules” featuring Hercules strangling the lion. The obverse of the coin features the Pobjoy Mint effigy of Her Majesty Queen Elizabeth II and includes the year date 2020.

The coins will be presented in a round capsule with spacer and housed in a Pobjoy Mint pouch being accompanied by a certificate of authenticity.