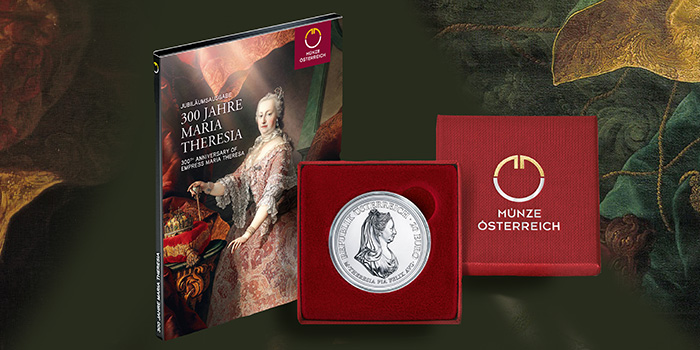 The third coin in the Austrian Mint’s Empress Maria Theresa series features the only ever female ruler of the Habsburg Empire wearing a widow’s veil. Maria Theresa donned the veil following the sudden death of her beloved husband, Francis I, in 1765. Like the other entries in this series, Clemency and Faith has been inspired by medals issued during the Empress’ reign and is minted in extra-bold relief for a special antique look and feel worthy of its illustrious subject.

Devastated by the death of Francis, Maria Theresa dressed in mourning for the rest of her life and even had the room in which he died, in the Hofburg in Innsbruck, converted into a chapel. The portrait of Maria Theresa wearing a veil on the coin’s obverse is from a relief by Anton Guillemard (1747-1812), while the coin’s reverse shows an allegorical representation of Clemency in which a female figure offers her hand to a fallen soldier.

Celebrating the 300th anniversary of the birth of Empress Maria Theresa in 1717, the four-coin Empress Maria Theresa series is based on the four cardinal virtues that drove the empress. Featuring an amalgam of original motifs taken from medals issued during Maria Theresa’s 40-year reign (1740-1780), the coins combine Courage, Justice, Clemency and Prudence with four different portraits of the Empress: as a young woman; as a wife; as a widow; and with her successor, Joseph II.

Minted to a maximum of 30,000 pieces in Proof quality only, each superb 20 euro silver coin (925 Ag, 2/3 ounce) out of this Maria Theresa Series comes in an attractive case with a numbered certificate of authenticity. We kindly request your orders by Wednesday, April 11, 2018 and that receipt of payment be carried out by Monday, April 16. Coins will then be shipped starting Tuesday, April 17.

Boasting over 800 years of experience, the Austrian Mint renowned the world over first-class precious metal processing and coin manufacture. A member of the international minting elite, it is a global player in this field. Without such a pedigree the Vienna Philharmonic would never have become Europa’s most sought after bullion coin. The Austrian Mint’s flagship product is the Vienna Philharmonic bullion coin. Produced in five different sizes, from one ounce to 1/25 of an ounce, the Vienna Philharmonic fits every pocket and occasion. Investors, collectors and gift-givers all value the unique combination of its beautiful design and highest possible minting quality, which make it one of the world’s best-loved and best-selling bullion coins. Since it was first struck in 1989, on one side the coin’s award-winning design has featured a harmonious assortment of musical instruments from the world-famous orchestra.