The Mexican War for Independence coinage is one of the most fascinating, diverse and complex series in all of Latin American numismatics. This short series is rich in history and can provide a rewarding experience for collectors at all levels. But beware; it is poorly cataloged, so a learning curve and some bumps along the way should be expected. 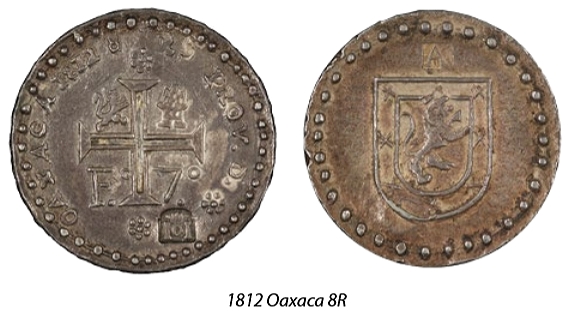 There is only one substantive numismatic reference on the War for Independence (WFI) series and it was written in 1938. Dr. Alberto F. Pradeau’s “Numismatic History of Mexico” still stands as the “must have” reference for today’s collector. Luckily, it was reprinted by Sanford J. Durst in 1978 and is widely available today. In addition, every English language reader should have Volume IV of “The Works of Hubert Howe Bancroft, History of Mexico”. This history book was written in 1885 and covers Mexico from 1804-1824. It provides a detailed accounting of the major players and activities during the war. This is invaluable for any collector of this period who wants to do more than “scratch the surface”. We have accumulated a small number of the Bancroft volumes which are available at nominal cost based on condition. For Spanish readers there are additional historical references which we can recommend on request. 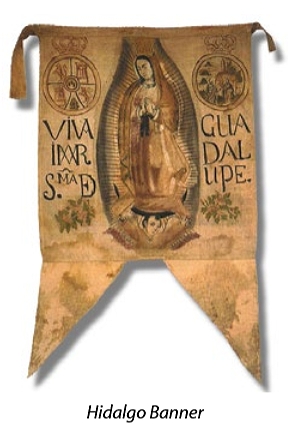 The biggest obstacle for most starting collectors is the organizational confusion surrounding theseries. Pradeau offers relevant background on most of the issuers but this 1938 work is in need of updating. Krause is a mess. It is disorganized with a lot of confusing and/or misleading information. Since Pradeau provides a good historical treatment of the WFI issuers, I will not repeat that useful information in this article.

Instead, I will attempt to supplement Pradeau with a big picture way to view and organize the WFI issues and issuers. Hopefully, this will allow the reader to approach collecting (and Krause) in an informed manner. If you are up for the challenge, a world of discovery awaits in the WFI!

From 1810 to 1814 both Royalists and Insurgents issued necessity coinage and counter-stamped issues.
Prior to the start of the WFI in September of 1810, Provincial capitals shipped bullion to Mexico City, which was coined and then returned. But during this early period, Insurgents controlled large parts of Mexico, effectively severing these local mining centers from the Royal Mint. Out of necessity, local authorities resorted to casting or minting coinage for commerce and to pay the troops. Most branch mints started by either (1) issuing a Provisional coinage of local design or (2) casting coins from Mexico City hosts and then applying a validation stamp. Near the end of 1812 it appears that the authorities in Mexico City forbid the use of Provisional designs. To comply, the branch mints of Durango, Guadalajara, Guanajuato and Zacatecas began minting the Ferdinand VII draped bust design. The rarity of all these draped bust issues dated 1812 attests to this timing. Valladolid and Chihuahua were laggards, making the transition in 1813 or shortly thereafter.

In 1811 Insurgent groups also began producing their own coinage for commerce. Coined silver was much more useful than silver bars for purchasing supplies or paying soldiers. Both the Royalist and Insurgent necessity issues of this early period were crudely produced and of generally poor quality. Both weight and fineness could vary considerably. 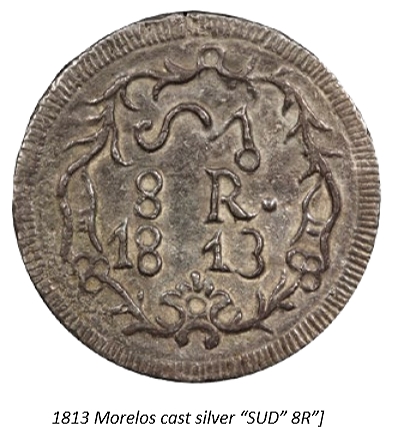 Because of this poor quality, the local inhabitants, who for generations had been accustomed to the excellent Mexico City coinage with its’ reliable silver content, were reluctant to accept these necessity issues. This led both Royalist and Insurgent authorities to counterstamp the necessity issues as official verification of their value.

By 1815 the WFI had turned decidedly in the Royalists favor. Most Insurgent leaders had been either killed or captured. The few that survived controlled little territory and were generally reduced to “hit and run” banditry. After 1814, no Insurgent coinage was issued and neither Insurgent nor Royalist counterstamps were employed. This little recognized fact (especially as it relates to counterstamps) is usefully recalled when we think of WFI issues as either the pre 1815 Necessity issues or post Standardized issues.

From 1815-1822, only the Provincial capitals of Chihuahua, Durango, Guadalajara, Guanajuato and Zacatecas continued to issue struck coinage in the standardized style of Mexico City (draped bust of Ferdinand VII). The quality of this struck money is generally poor in the early years but improves significantly before the end of the WFI.

During this period, Royalist necessity issues of 1810- 1814 were withdrawn from circulation and often used as planchets for the striking of standardized coinage. This is particularly true for Chihuahua where the “host” coin is generally visible on coins struck from 1815-1822. Often, earlier counterstamps “show thru” on these standardized struck coins and can be mistaken for a counterstamp produced after 1814. This mistaken identification has resulted in cataloging errors that begin in Pradeau and are rampant in Krause.

In addition to the 5 Provincial capitals described above, Monclova, Neuva Viscaya (Durango), Oaxaca, Real del Catorce and Sombrerete issued necessity coinage prior to 1815. These 5 authorities issued only Provisional money dated 1810-1812 and ceased mint functions prior to making the transition to the draped bust design. Valladolid is a special case which issued an extremely rare provisional and draped bust design in 1813. The coinage of these 6 smaller authorities is very scarce to extremely rare. Together with the 5 larger authorities, these 11 issuers produced about 17 major types of crowns and 28 types of minors. 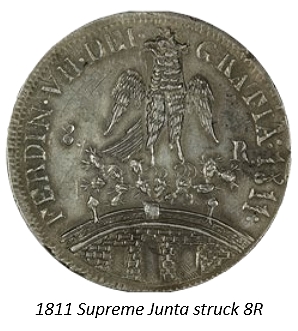 The Morelos issues, also known as “SUD’s”, are cataloged incorrectly as Oaxaca in Krause. These were issued in numerous locations following Morelos’s campaigns in the Southern provinces. In addition to the Supreme Junta and Morelos, Insurgent struck issues include the extremely rare Zongolica 2 and 8 reales of 1812 (Krause cataloges as Veracruz), and 1813 copper issues of Osorno at Zacatlan (cataloged under Puebla). Together, these 4 issuers are represented by approximately 10 major types of crowns and 24 types of minors.

In our next newsletter we will explore issues with validation stamps. Often referred to as “counterstamps” this series is quite complex and is the area where current catalogs are most inadequate. We will attempt to break it down by the issuing authority and purpose and shed some light on this fascinating area! We will then conclude with a survey of current market conditions.