This series, which has gone from the most collected during the late 1960s to the most stagnant today, has a lot of promising segments. There were probably 10 times as many collectors in the ’60s and ’70s as there are today, mostly due to the demise of the Whitman and Dansco coin albums. During that period of time it was very popular to collect Mexican coins by type or date, in an effort to fill up the albums. At that time not many people were grade conscious and simply attempted to fill the albums with decent looking coins.

Unfortunately, those vf to au coins are worth about the same today as they were all those years ago. However, the few collectors who were grade conscious were richly rewarded. Coins that grade MS65 today sold for slight premiums over their average uncirculated counterparts at that time. It was not until the late 90s that high grade, relatively common coins started to bring big premiums. 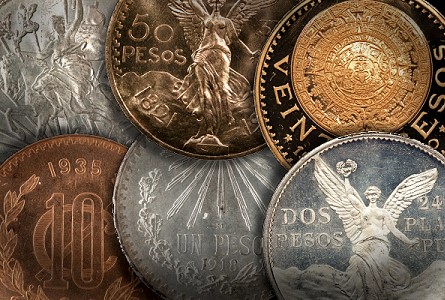 Today, grading is everything. Slabbing coins became more common in the late 90s and is now standard practice. The phenomenon of registry sets furthered a market condition whereby a lot of 20th-century coins that grade below MS63 are deeply discounted and difficult to sell today.

All of these events contributed to changing the 20th century coinage from the most collected to the weakest market segment. There are definitely exceptions and with the bad news comes a great deal of potential. Approached with some thought, we believe this segment of the Mexican market holds great potential for individuals who are patient and collect with a long term view.

Following are our thoughts on several individual areas of 20th century coinage.

•             Late Republic Centavos 1899-1905. This area is still slow in au and below except for the rare dates. However, in the past year we have seen record prices for the highest graded coins and there is a lot of interest. Better date coins graded MS63 and up are bringing significant premiums over catalog.

•             Bronze Issues of 1, 2, 5, 10 and 20 Centavos from 1905 to around 1935. Aside from the rarities such as the 1922 2 centavo and the 1931 5 centavo, this market is pretty much dead below MS63. Coins in MS63 are selling for around two thirds of catalog uncirculated prices and sell slowly. Coins in MS65 with good eye appeal are saleable at catalog values or higher.  We think high grade, nicely toned coins with good eye appeal are scarcer than people believe and are good value long term. We especially like the coins that are a really pretty gunmetal color or are full red.  With some patience, a set of these in MS65 can be put together at reasonable prices, with the exception of the few really rare dates.

•             Caballito Pesos. This segment of the market is very strong in high grade. There are a number of collectors looking for all dates in gem and prices are rising. Coins in MS65 are bringing well above catalog bu.

We have a wide selection of high grade coins from the 20th century on our website. If you are looking for something in particular that you don’t see on the website be sure to let us know. We fill want lists before we put coins on the website.