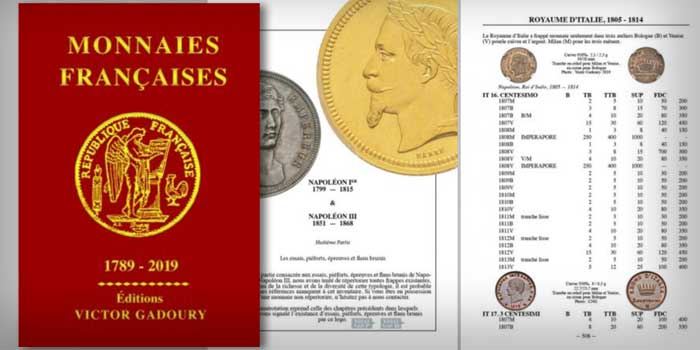 Monnaies Françaises has been the bible on the coins of modern France since it was first published in 1973. It is now authored by Francesco Pastrone and published by Editions Victor Gadoury of Monaco. It is called “Le Rouge” (The Red) in French. The 24th edition, covering the years 1789 to 2019, with all illustrations in color, and a number of new features, is now being printed and will be available in North America by the end of November.

Making its debut in this edition of Monnaies Françaises is a chapter for Napoleon I featuring the avidly collected essais, piéforts, and proofs or flans bruni struck during his reign.

Also new is expanded coverage of all the silver and copper coins of Napoleon in Italy, the latest coins of the Monnaie de Paris, and a new issue from Monaco in the widened coverage of that country. In addition, there are numerous improved high-quality illustrations, many of them showing close-up details.

At 608 pages, Monnaies Françaises is 18 pages larger than its last edition. It has information on all French coins minted since the Revolution of 1789 through the current Fifth Republic in chronological order by denomination (smallest to largest), including both the circulation and collector issues of France’s modern euro coins through 2019. Also given are metal, fineness, weight, diameter, edge, engraver’s name and privy marks.

Mintage figures are provided by date and mintmark for each denomination, along with the current values in euros in up to five grades. Included are obsidional coinage issued for the sieges of Mainz and Antwerp, and special sections on commemorative coins, coins of Monaco, coins of Corsica (1736, 1762-68), coins of Saarland (1954-55), the coins of the Kingdom of Westphalia, and an illustrated guide of all privy marks.