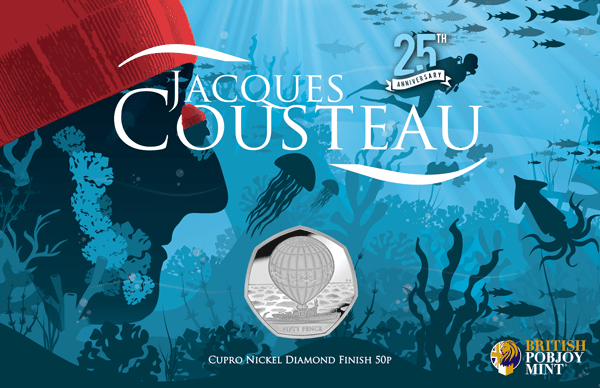 To commemorate Jacques-Yves Cousteau on the 25th anniversary of his death, the Pobjoy Mint is pleased to announce the release of this limited-edition 50 pence coin on behalf of the British Antarctic Territory.

Jacques-Yves Cousteau was a French naval officer, explorer, conservationist, filmmaker, scientist, photographer, author, and researcher who studied the sea and all forms of life in water. He co-developed the Aqua-Lung, the first open-circuit SCUBA set, and pioneered marine conservation. With his iconic red beanie and famed ship Calypso, the French marine explorer sailed the world for much of the late 20th century, educating millions about the Earth’s oceans and its inhabitants—and inspiring their protection.

On an expedition in Antarctica in 1972, Cousteau and his divers were the first to explore under the icebergs and ice shelf. His ship RV Calypso, a former British Royal Navy minesweeper, was equipped with a helicopter and a balloon to complete the equipment for aerial exploration. Cousteau restructured and transformed the ship into an expedition vessel and support base for diving, filming and oceanographic research.

In the four-month-long expedition in Antarctica, Cousteau captured never-before-seen footage of the frozen continent and his epic voyage, where his ship barely escaped the onslaught of ice and storm she encountered.

This human adventure, which was made into a film, gave the world a modern vision of the ice continent and its stakes. The epic adventure led Jacques Cousteau to launch, in 1990, an international petition to safeguard the whole continent proclaiming that “Antarctica is an inestimable treasure that we must preserve intact for future generations”.

The design features the ship Calypso with a balloon set to take off for aerial exploration in the icy Antarctic waters. The coin is available in Cupro-Nickel Diamond Finish inside a beautifully presented pack and in Proof Sterling Silver in a presentation acrylic box with a complementary sleeve. The obverse of the coin features an effigy of Her Late Majesty Queen Elizabeth II produced exclusively by Pobjoy Mint.