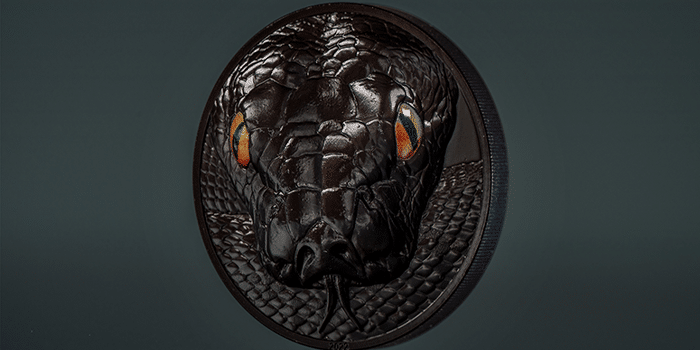 One side features the head of a python from the front, behind it is its scaly body; only its eyes gleam from the Obsidian Black surface; on the rim the year 2022.

The other side features the coat of arms of Palau, above the name of the country, below the denomination in a starry sky framed by a mountain landscape on the bottom; on it the name of the series: HUNTERS BY NIGHT. In 2022, the third issue of the award-winning CIT series Hunters by Night will be released. After Black Panther and Eagle Owl, this coin is dedicated to a reptile: the python, a dangerous constrictor snake, which has inhabited Earth for 47 million years. The finely scaled black head of the depiction is reminiscent of the night-hunting black-headed python that lives in Australia and can grow up to three meters in length. It feeds on small mammals, birds, and reptiles, and usually is no threat to humans.

Nevertheless, this wonderful animal and its fascinating eyes trigger primal fears in our subconscious. Since Adam and Eve, the snake has been considered an incarnation of evil, sneaking up on its victims maliciously to devour them. Its forked tongue has become the epitome of lies and falsehood. Its elongated oval pupils have made it into modern horror literature, despite the fact that it is humanity that threatens to exterminate snakes more than the other way around.

CIT uses state-of-the-art minting technology to achieve this numismatic marvel. This is evident from the impressive snake’s head with the lifelike coloring of its eyes. The other side is remarkable, too. It is the same as that of the predecessor issues. It features a mountain landscape with a starry sky that shines or disappears depending on the angle from which you look at the coin. Hunters by Night is a series that excels in both its masterful aesthetics and skillful execution.