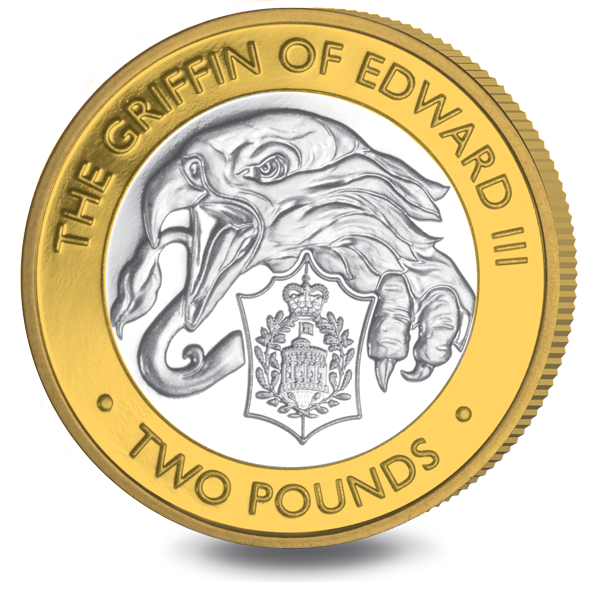 Pobjoy Mint is delighted to announce the release of the eighth coin in the stunning new series of £2 bimetallic coins featuring the Queen’s Beasts. The coin, issued on behalf of the British Indian Ocean Territory, features the Griffin of Edward III.

The Griffin of Edward III’s relation to the Queen comes from Edward III, founder of the Order of the Garter, who engraved the Griffin on his private seal.

Edward III, also known as Edward Windsor, used the seal bearing the image of the griffin for 20 years. It is said that he had bed linen and robes embroidered with the beasts. His private seal used to be the most powerful and authoritative symbol of royal identity.

The griffin is a mythical creature with the body, tail, and back legs of a lion and the head and wings of an eagle. It is said that it represents a combination of courage, strength, guardianship, and leadership and it’s meant to have the natural keen vision and swiftness of the mighty eagle.

The design on the coin shows a griffin’s head with a shield at the center showing the Round Tower of Windsor with the Royal Standard flying from the turret, enclosed by two branches of oak surmounted by the royal crown.