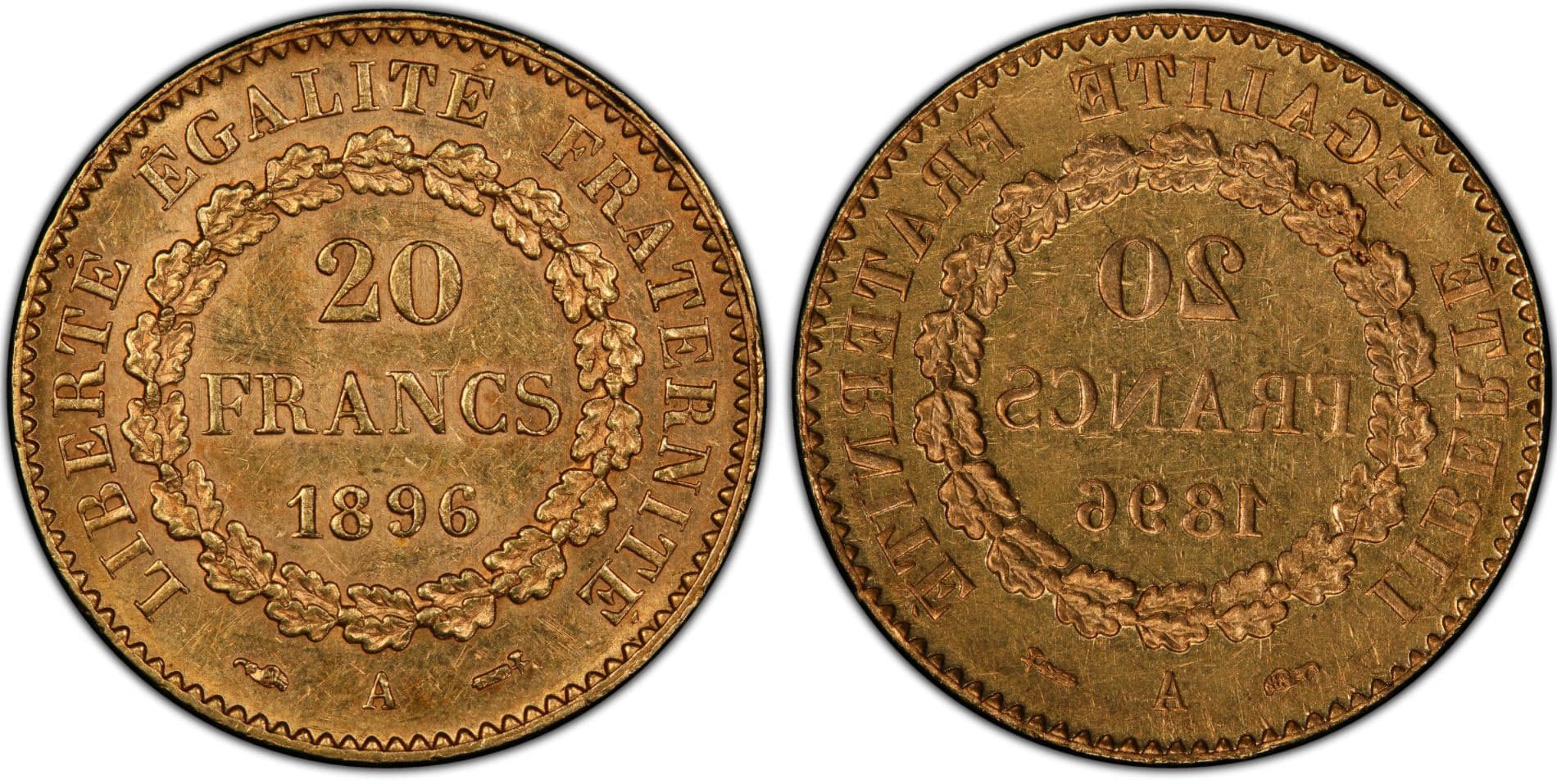 In coin collecting, mint errors can range from barely noticeable to massive and dramatic. Depending on the country, mint tolerances vary from strict to nonexistent, and in a setting like the Paris Mint of France in the late 1800s, errors were often uncommon due to stricter quality control. This is especially true with gold coin issues, because of the monetary value of such coins, governments allowed for little tolerance.

Recently in a PCGS Europe Express submission, a dramatic brockage mint error on a gold 20 francs was submitted to PCGS for certification.

Brockage mint errors have occurred throughout the ages and can be found on early ancient coins as well as coinage that is produced today. A brockage occurs when a struck coin or obstruction isn’t ejected from the dies and a new planchet or blank is fed into the dies. The struck coin or obstruction transfers the design struck into it onto the fresh planchet, creating a reversed image of what was struck into it.

With dies being a reversed or mirrored image of what will be struck, the struck coin or object is raised and shows the intended design. With a brockage error, the piece that had been previously struck is raised and that is what transfers its design – not the design of the dies. Therefore, when it is impressed into the coin a mirrored incuse image occurs.

With hand-hammered coinage, brockage errors are human errors, with the person striking the coin causing such mistakes. Because a coin’s weight and fineness (not necessarily the perfection of its design) was more important when hammered coins were prevalent, these errors seemed tolerated both by the mints and by the public and freely circulated. While these early brockage errors occurred infrequently, there are still many survivors left for collectors.

With the advent of machine-struck coinage, the human element of making errors is still there, but interestingly enough it is the machinery that causes these errors most often.

As technology improved into the late 20th century and beyond, most of the errors produced by automated equipment were also caught by machinery, and, depending on the mint, errors released into circulation became almost nonexistent with artificial intelligence. A brockage error is dramatic – it’s essentially a two-sided coin, with one side mirroring the other. In some cultures, they are considered lucky coins–but then any collector who finds one would also deem themselves lucky.

While there are plentiful examples of errors from France, finding a major mirror brockage in gold is exceptionally rare, making it an incredibly desirable coin for collectors and error coin specialists.

This example is a mirrored brockage, with the reverse design being transferred onto what would have been the obverse of the coin. Because the error occurred on the obverse side, we are still able to see the date, the mint mark, and privy marks on the coin to determine a full attribution (1896-A 20 Francs with the Faisceau Gad-1063). While this coin eluded detection by the Mint and was released into circulation, it didn’t last long before being removed and preserved. The coin graded PCGS AU58. The last time this coin was offered publicly in auction was in 2004 in the Numismatica Genevensis SA Auction 3 as Lot 466, where it brought 6,000 CHF or about $6,500 USD – a price that today it would far exceed if offered again.