The seventh release in The Perth Mint exclusive The Simpsons coin program, this brightly colored shaped coin depicts a Duff beer can, Homer Simpson’s drink of choice and the most popular beer in his fictional home town of Springfield. 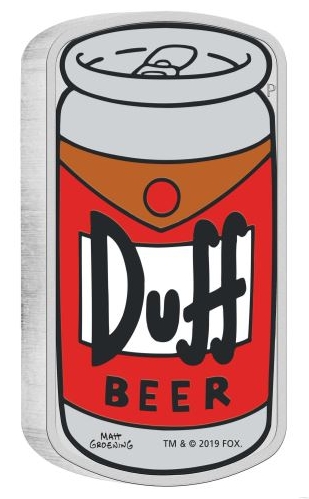 The Perth Mint coin’s reverse portrays a colored image of a Duff beer can, Homer Simpson’s drink of choice and the most popular beer in Springfield. Included in the design are Matt Groening’s signature and The Perth Mint’s ‘P’ mintmark.

Each coin is presented in a clear acrylic case, allowing both sides of the coin to be displayed, and is packaged within a themed shipper. The coin is accompanied by a numbered Certificate of Authenticityfrom the Perth Mint.