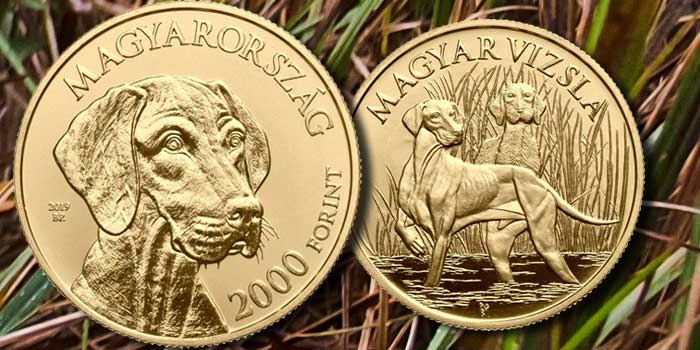 Although the Hungarian Vizsla did not start arriving in the United States until the close of World War II, the first written reference to the Vizsla dog breed is said to have been recorded in the Illustrated Vienna Chronicle prepared on order of King Louis I of Hungary in the 14th century.

Today, the breed is more than just a Hungarian national symbol. Vizslas are, as Animal Planet says:

“[T]reasured dogs both in the show ring and in the hunting field. This breed combines the best traits of pointers and hunters in a robust but lithe frame. While they are avid hunters, what Vizslas want most in the whole world is to be by your side as much as possible.”

The Vizsla in Hungary has survived occupations, revolutions, and wars, and is thriving today. The National Bank of Hungary and the Hungarian Mint have made the Vizsla the first subject in a new annual coin series, “Hungarian sheep and hunting dog breeds.” The Vizsla is featured on both sides of a legal tender 2,000 forint coin, with a forward-facing head on the front, and a pair standing in water on the back. The coin is made of an alloy of copper, nickel, and zinc and measures 34 mm (1½ inches) in diameter. It weighs 16 grams and is limited in issue to a maximum of 10,000 coins. It is struck in proof-like quality and will be available for $18.95 including free shipping in the U.S.A. when it is released by the mint in Budapest at the end of September. Orders for five coins or more are $16.95 each.

To order, or for more information on these and other coins of Hungary, contact the Hungarian Mint’s North American representative at P.O. Box 399, Williston, VT 05495. Call toll-free at 1-800-421-1866 or fax 802-536-4787. Email: [email protected], or click on the Hungarian flag at www.coin-currency.com for secure website ordering. Shipping to other countries will be based on actual cost. Vermont residents add 6% sales tax. Those desiring to receive information and photographs electronically on a regular basis can provide their email address to the email above.

The Vizsla probably developed as a combination of the various breeds collected by the Magyars before they settled in Hungary over a thousand years ago. Texts from the Middle Ages describe dogs resembling the Vizsla. As Hungary at the time was plentiful in game, hunters needed a fast working dog that could point, retrieve, and trail mammals over thick ground cover. The Vizsla fit the bill and the “yellow pointer” became the companion of the aristocracy.

The breed was fully established by the 18th century but has endured several bouts with extinction. Once it was as a result of competition with other breeds, such as the English and German Shorthaired Pointer at the end of the 19th century. Another time was after the devastation of World War II when it is said that there were only about a dozen of the breed remaining. From there, the breed was revived in several strains. Its spread worldwide was helped in part by Hungarians fleeing the Russian hegemony of Hungary as they took their dogs into exile in numerous other countries, including the United States, where on November 25, 1960, the Vizsla became the 115th breed recognized by the American Kennel Club.