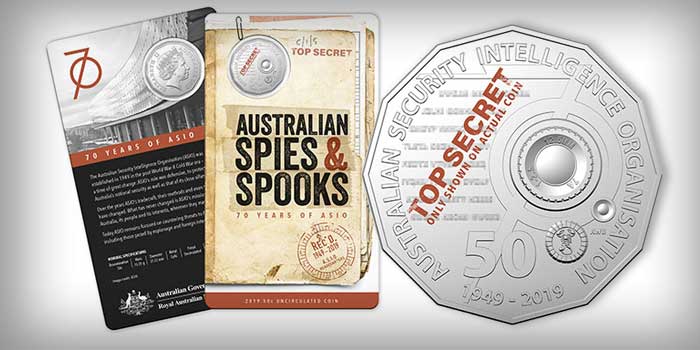 On Monday, September 9, the Royal Australian Mint released its first-ever coin featuring a secret code to commemorate the 70th Anniversary of the Australian Security Intelligence Organisation (ASIO). Monday also marked the launch of the Mint’s exciting new competition – Coincryption – a competition that celebrates the secret and elusive world of spies and espionage.

The Director-General of Security Duncan Lewis said, “This project has been a wonderful collaboration between the Royal Australian Mint and the Australian Security Intelligence Organisation (ASIO).”

“Spooks and spies is an intriguing theme and often the stuff of novels and film. It is exciting to see this theme interpreted in such a creative and enduring way.”

“2019 is a milestone year for ASIO offering a natural point of reflection, to commemorate our history, and celebrate our success, our people and our culture—it marks 70 years of ASIO’s service protecting Australia and Australians.”

“As ASIO’s 13th Director-General of Security, I am immensely proud to have led an organization of such caliber.”

Since 1949, ASIO has been at the heart of Australia’s national security. ASIO was established in 1949 in the post-World War II Cold War era – a time of great change. ASIO’s role was defensive, to protect Australia’s national security as well as that of its close allies. Over the years ASIO’s tradecraft, their methods, and even their foes have changed. What has never changed is ASIO’s mission to protect Australia, its people, and its interests, wherever they may be.

During the 1940s and ’50s, the Soviet intelligence service (the KGB) used One-Time Pads to encrypt their cables to and from Moscow. Poor encryption practices allowed the 5-EYES allies to decrypt some of the cables under Operation VENONA, revealing the presence of a Soviet spy ring active in Australia and prompting the United Kingdom to urge Australia to establish a security service, leading to the establishment of ASIO in 1949.

In line with the theme of spies and spooks, the Mint is offering the exclusive opportunity for the Australian public to win the only proof commemorative coin in existence that features the 70th Anniversary of ASIO coin design. Customers who purchase a 2019 50c Uncirculated Coin – 70th Anniversary of the Australian Security Intelligence Organisation from the Royal Australian Mint can enter by registering at coincryption.com.au and entering the secret message on their coin to go in the draw to win the only ASIO Proof 50c Coin. Complete instructions on how to enter and conditions of entry are available at the website.

The 2019 50c Uncirculated Coin – 70th Anniversary of the Australian Security Intelligence Organisation is available in a limited mintage of 20,000 and retails for $10.00 AUD. The coins are Australian legal tender and can be purchased from the Mint’s website or Contact Centre (1300 652 020).