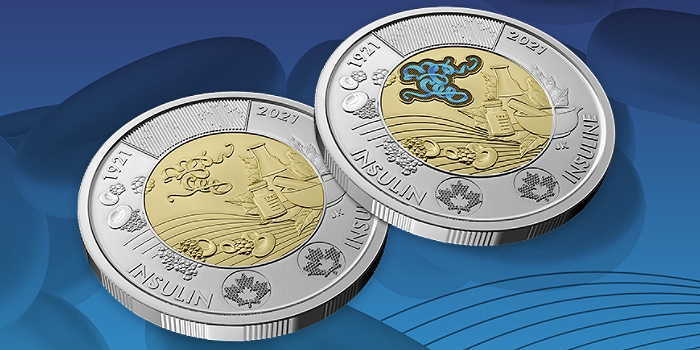 The Royal Canadian Mint is issuing a new $2 circulation coin celebrating the fact that, 100 years ago, four researchers achieved a Canadian medical breakthrough that changed the world forever. In 1921, the collaboration of Frederick Banting, Charles Best, James Collip, and John Macleod led to the isolation and purification of insulin and offered a life-saving treatment to people whose lives would previously have been cut short by diabetes. The coin celebrating a life-saving, Canadian-made medical discovery starts circulating today.

“The Nobel Prize-winning Canadian discovery of insulin in 1921 is one of the 20th century’s most celebrated medical discoveries, which has saved millions of lives in Canada and around the world,” said the Honourable Chrystia Freeland, Deputy Prime Minister and Minister of Finance. “Parliament passed legislation last month to establish a national framework on diabetes and we are delighted this commemorative coin will circulate from coast to coast to coast as a tribute to one of Canada’s greatest scientific triumphs, and as a reminder of the critical importance of the next century of diabetes research.”

“The Mint has the unique privilege of creating lasting reminders of Canadian achievements through coins and it is proud that its newest $2 circulation coin celebrates the 100th anniversary of Canada’s discovery of insulin,” said Marie Lemay, the Mint’s President and CEO. “This commemorative circulation coin is a heartfelt and enduring “thank you” to the talented researchers behind a Canadian medical breakthrough that has saved millions of lives over the last 100 years, and continues to do so today.”

The reverse of the $2 circulation coin commemorating the 100th anniversary of the discovery of insulin as a treatment for diabetes is designed by Kitchener-Waterloo, Ontario artist Jesse Koreck. A focal point of the design is a monomer, a building block of the insulin molecule. Also displayed are scientific instruments used in the early formulation of insulin (vial, mortar and pestle, and Erlenmeyer flask) overlaid on a maple leaf, as well as red blood cells, glucose, and insulin molecules. The words ‘INSULIN’/ ‘INSULINE’ appear on the coin’s outer ring, as do the years ‘1921’ and ‘2021’, highlighting the anniversary.

The laboratory instruments represent the “tools of the trade” of the four researchers behind the discovery and application of insulin for human use. Frederick Banting developed the theory that a pancreatic substance could be extracted as a possible treatment for diabetes and led the research; John Macleod provided a laboratory and equipment at the University of Toronto and assigned Charles Best as a lab assistant; and biochemist Charles Collip purified insulin extracts for use as an effective diabetes treatment.

“The new circulation coin commemorating the 100th anniversary of insulin is a visual reminder of the scientific breakthrough that took place here in Canada,” said Laura Syron, President and CEO of Diabetes Canada. “Although insulin brought miraculous change in life expectancy and quality of life for millions of people around the world, it is not a cure. Together with the support of Canadians and Canada’s researchers, we will continue the legacy of Frederick Banting, Charles Best, James Collip and John Macleod and end diabetes.”

In all, two million colored versions and one million uncolored versions of the coin have begun circulating as of Tuesday, July 13. Colored coins will show the insulin monomer in the same blue color used to raise diabetes awareness. The obverse features the effigy of Her Majesty Queen Elizabeth II, designed by Canadian artist Susanna Blunt in 2003.

The Mint is adding to this commemoration with a collector keepsake set featuring both versions of the commemorative circulation coin, packaged with uncirculated versions of our classic 2021 circulation coins (5-cent to $2). It retails for $24.95 and its mintage is set at 100,000. There are also 10,000 limited-edition special wrap rolls of colored and uncolored coins containing 25 uncirculated coins each, available for $79.95. Finally, an exclusive $200 pure gold coin featuring a large-scale version of the circulation coin’s reverse design is available for $3,999.95 and is limited to 450 coins worldwide.