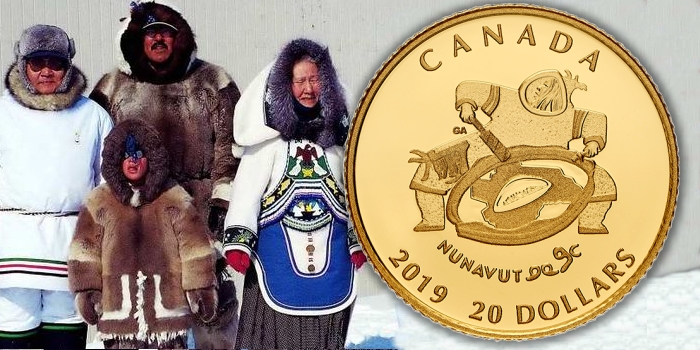 The coin is entirely Arctic, from its design to its metal content

In celebration of the 20th anniversary of the Nunavut Territory, the Royal Canadian Mint has proudly issued a new collector coin crafted entirely of Nunavut-sourced gold. The coin recaptures, in 99.99% pure gold, Germaine Arnaktauyok’s iconic drummer design that first appeared on the $2 circulation coin celebrating of Nunavut’s creation in 1999. The beautifully crafted coin is available for purchase as of today.

“The Mint is passionate about honoring Canadian talent and celebrating our exceptional cultural diversity through beautifully crafted coins,” said Marie Lemay, President and CEO of the Royal Canadian Mint. “We are proud to honor Germaine Arnaktauyok’s artistic legacy, in pure Nunavut gold, to wish the people of this important territory a happy 20th anniversary.”

The coin is crafted from 99.99% pure gold, mined at Agnico Eagle Mines’ Meadowbank mine, near Baker Lake, and TMAC Resources’ mine at Hope Bay. In the same tradition as the Mint’s first Nunavut-sourced coin issued in 2018, this 1/10 oz. gold coin is struck on a thin, yet wide blank that gives its Arctic-themed reverse design more room to shine. The obverse features the effigy of Her Majesty Queen Elizabeth by Susanna Blunt.

“Agnico Eagle is honored and proud that gold from our Meadowbank mine is part of this special Royal Canadian Mint collectible coin commemorating Nunavut’s 20th anniversary,” said Sean Boyd, Vice-Chairman and CEO of Agnico Eagle Mines. “We are also extremely proud to be working with our Inuit partners to responsibly develop the resources in Nunavut in a way that contributes to the economic and social prosperity of the territory.”