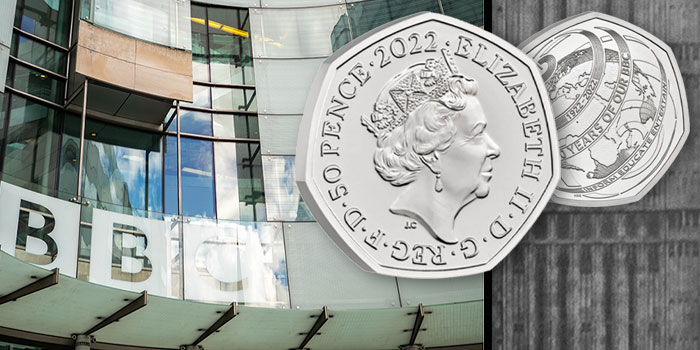 The Royal Mint has unveiled the design of a collectible 50p in celebration of 100 Years of Our BBC, in partnership with the world-renowned British broadcaster during its centenary year.

The coin is the first to be released by The Royal Mint since the passing of Her Late Majesty Queen Elizabeth II and will still bear her effigy on the obverse side of the coin. The 1,100-year-old company last month unveiled the official UK effigy of King Charles III, but the 100 Years of BBC coin will feature the existing effigy people will be familiar with, in the interest of sustainability. The Royal Mint has purposefully decided not to re-strike coins that had already been produced with her Late Majesty’s effigy, to minimize waste or unnecessary environmental impact.

Since its inception in Britain in 1922, the BBC has reached audiences all over the world with its original public service mission to inform, educate and entertain. The new collectible 50p design by artist Henry Gray pays tribute to the BBC’s global reach, with the depiction of the earth at the heart of the design.

In recognition of its long-standing remit and 100-year milestone celebration, the inscriptions “Inform, educate, entertain”, “100 Years of Our BBC” and “1922 – 2022” appear to emanate from a broadcasting mast emerging from the earth, slightly tilted on its axis.

The design has been brought to life with the best British craftsmanship at The Royal Mint, using handcrafting and laser-cutting techniques to create contrasting textures of frosting against a mirror-like table on the surface of the 50p.

“Like The Royal Mint, the BBC is an original British maker who has put innovation at the forefront of its evolution. Coins are miniature pieces of art that tell the stories of our nation and we are delighted to be working with Britain’s leading national broadcaster to create a special 50p in recognition of their 100 Years.

“An ever-present British institution for most people’s lives, the BBC has had a marked influence on our culture and broadcast some of the most extraordinary moments in British history. On the reverse side, the commemorative design honors BBC’s worldwide influence with a depiction of the earth which has been frosted combining traditional craftsmanship and state-of-the-art technology to create contrasting textures.

“With the obverse side of the coin featuring the effigy of Her Late Majesty Queen Elizabeth, we do anticipate a high demand for these coins from collectors.”

In celebration of the launch, the coin was photographed alongside the AXBT Microphone that features in a collection of “100 Objects that made the BBC” at Broadcasting House in London.

“The BBC is honored that The Royal Mint is marking our centenary with this special 50p coin. Its design perfectly captures the BBC’s huge reach and impact over 100 years as the world’s leading public service broadcaster.”

Made at the home of precious metals, the collectible coins are minted to the highest standard in gold, silver, and Brilliant Uncirculated and are available from £11 (about $12.40 USD at the time of publication) at The Royal Mint website.