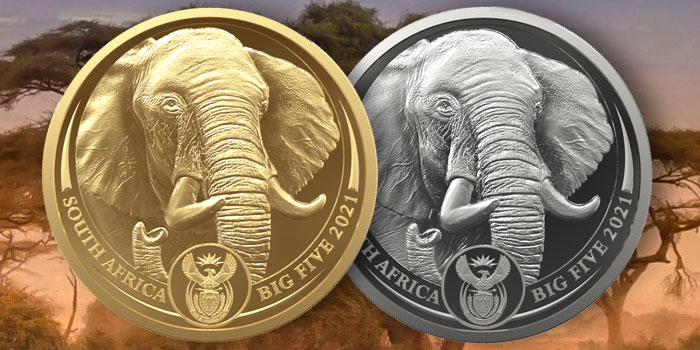 The South African Mint, a wholly-owned subsidiary of the South African Reserve Bank, has launched the long-awaited Big Five Series II collectible coin collection, a sequel to the award-winning first series which was introduced in 2019.

Following the issuing sequence of the first series, this latest collection will also follow a staggered release approach that will see the elephant lead the introduction of the series, followed by the lion, the rhino, the leopard, and the buffalo, every six months.

The second edition of the Big 5 boasts a subtle revision to the obverse design, while the reverse design remains the same as that of the previous series, with the two halves of the animal’s face. The obverse of the first edition of the elephant coins depicted both the face and part of the majestic creature’s body, facing towards the left-hand side.

In the new series, the obverse of the coins is dominated by the face of the animal, without any depiction of the rest of its body. The long, downward-pointing tusks on the obverse in series I have been replaced by shorter, upward-pointing tusks, and the elephant facing the right-hand side.

The most exciting additions to the Big 5 collection in Series ll are by far the introduction of new coin formats or sizes, something coin collectors around the globe will surely celebrate. The coins are once again available in three metals: silver, gold, and platinum.

The platinum coin offering remains a single 1oz coin. The silver range is comprised of a 1oz Proof coin, a 1oz Brilliant Uncirculated (BU) coin packaged in an attractive blister folder, unlike the traditional coin box, a Big 5/Krugerrand combination set, and the ever-popular two-coin double capsule Proof set. Additional silver sizes are being explored for a later release date.

In the gold range, where all the coins are Proof grade, the standard 1oz coin, and Big 5/Krugerrand combination set are joined by a new single 1/4oz coin and a new two-coin double capsule 1/4oz set. Additional larger gold sizes are being explored for a later release date.

“We are extremely proud of our latest collectible coin offering. The Big 5 coins have truly entrenched themselves as a popular choice among collectors around the world, in a remarkably short two-and-a-half-year period since the first coin was introduced,” says Honey Mamabolo, Managing Director of the South African Mint.

“We are particularly proud to introduce this latest range and emerge with this success story following a tough economic period for the country and really, the whole world, due to the Coronavirus pandemic. The Big 5 coins have changed the game for us and shifted our product portfolio to become the best-selling range, superseded only by the legendary Krugerrand,” concludes Mamabolo.

About the South African Mint

The South African Mint is the continent’s leading manufacturer of legal coin tender as well as commemorative and rare collectible coins. With over 100 years’ experience in supplying symbols of value to the African and global markets, we pride ourselves in delivering products that represent our commitment to uniquely African design and supreme craftsmanship. We collaborate closely with our customers to develop distinct and durable monetary products that capture and preserve the heritage and pride of our nation. The South African Mint is a wholly-owned subsidiary of the South African Reserve Bank (SARB), established in accordance with the SARB Act 90 of 1989, as amended.