Among all the coin auctions conducted in New York from Monday, January 8 to Sunday, January 14, there was no one single collection sold that was overwhelming or epic in nature. The main news story of the week was the incredible offering of British coins in total.

Here, the focus is on the grandest of British gold coins: hammered Gold Sovereigns and Triple Unites.

These are of tremendous historical importance and have the largest diameters of any vintage British gold coins. Furthermore, Gold Sovereigns and Triple Unites have been very popular with collectors for centuries. They are artistically distinctive and exciting.

Although no single auction included both a Gold Sovereign and a Triple Unite, there was a significant offering of rare and important British coins in each of the auctions conducted by Baldwin’s of St. James, Classical Numismatic Group (CNG), Goldbergs, Heritage, Spink, and Stack’s-Bowers.

The Petition and Reddite Crown patterns were already covered. Some other silver crowns (equivalent to silver dollars) and patterns were discussed two weeks ago. Last week, sales of major European rarities were reported and it was pointed out that a British Charles I Silver Pound brought $277,300. This is a very appealing representative of a particularly rare variety.

British coins refer to coins minted in the British Isles, a region that was recognized long before the nation of England was established. While most of the rarities auctioned at the NYINC may be out of the reach of most coin collectors, a large number of British coins from past centuries are inexpensive.

In December 2016, I discussed Groats (Fourpence coins) of King Henry VIII (1509-42) that sold for prices ranging from $79 to $450 and explained options for budget-minded collectors. At the Westchester Coin & Stamp Show in Tarrytown, New York on January 19, 2018, I noticed quite a few circulated British silver coins from past centuries being offered for less than $100 each (below $30 in some cases). Many decent British coins from the 1700s and early 1800s are affordable.

A future discussion will be about collecting vintage British coins for $25 to $250 each. It is hoped, however, that even collectors who cannot afford the coins being discussed here may wish to learn about rarities, coin markets and the culture of coin collecting. Collectors of rare U.S. coins often read about famous rarities that few collectors can afford to buy. In order to become knowledgeable about rare coins, monetary history and the history of coin collecting, there is a need to attain some understanding of particular very expensive coins.

When bullion buyers or beginning collectors now think about British Gold Sovereigns, they often think of coins like those that were first minted in the 19th century. The Gold Sovereigns struck from the late 1400s to the early 1600s are a whole different matter. Gold Sovereigns were the grand coins of the Tudor monarchs, the family that reigned from 1485 to 1603. At least one variety of King James I coin should be defined as a Gold Sovereign, an example of which is mentioned below.

James I reigned from 1603 to 1625 and was the first Stuart king. Through both of his parents, however, James I was directly related to the first Tudor king, Henry VII, who introduced the Gold Sovereign coin. Both Heritage and CNG auctioned Gold Sovereigns of Henry VIII. They were each struck at the Tower Mint in London at some point from 1538 to 1541. The coin in the Heritage sale is PCGS-graded as Extremely Fine-45. A little corrosion is noticeable. Neat, natural color, and honest wear contribute to this coin’s appeal. The price realized was $28,800.

CNG auctioned a better Henry VIII Gold Sovereign of the same variety (Spink reference #2267), from the Jonathan Rosen Collection. The $84,000 result was strong, though it was a very impressive coin overall.

Though the Rosen Collection Henry VIII Gold Sovereign was NGC-graded EF-40, I graded it as AU-50. There is just light wear on the high points. The design elements are very well detailed and intact. Further, it is technically strong. This coin has been subjected to just a very light cleaning and has naturally retoned in an excellent manner, with green fields and pale russet hues. This is an exceptional coin, one of the highlights of the whole week of auctions. It is interesting that it realized almost three times as much as the higher-certified Henry VIII Gold Sovereign in the Heritage sale.

The CNG sale featured a Gold Sovereign of Queen Mary I (‘Bloody Mary’) and two other very important coins from her reign. This 1553 Mary I Gold Sovereign, which was NGC-graded as AU-50, brought $39,000. In terms of face value (30 shillings) and physical specifications, Mary I Gold Sovereigns were like those of her grandfather, Henry VII. They weighed almost a half a Troy ounce and were nearly pure gold.

Though not as historically important or imposing as a Gold Sovereign, the Mary I Ship-Ryal is far rarer. Though it has a face value of 15 shillings, a Ship-Ryal is not a Half-Sovereign; its design is much different. The PCGS-graded AU-55, Hankin-Ryan-Rosen 1553 Ship-Ryal is one of just a few known of the type.

Two of the most extraordinary coins auctioned during the whole week were Elizabeth I Gold Sovereigns in the CNG sale. Both were struck after 1583. An NGC-graded MS-62 coin, “From the Arthur M. Fitts III Collection”, brought $54,000, an amount which would not seem like a lot to enthusiasts who saw the coin. 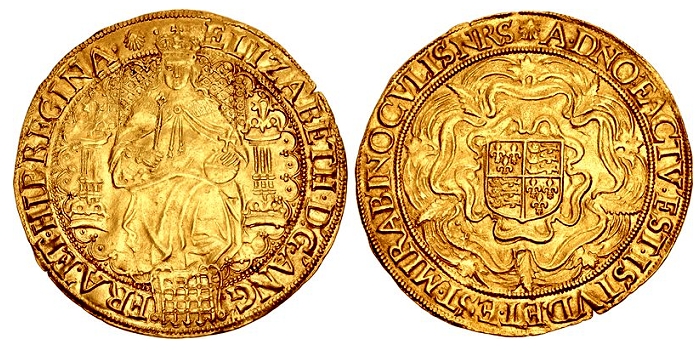 The second Elizabeth I Gold Sovereign was from “the Jonathan P. Rosen Collection”. This is NGC-graded as AU-55, and I graded it as AU-58 before I even saw the NGC label. Moreover, it is one of the most original Gold Sovereigns I have ever seen, with gradually developed patina characterized by brown-russet and tan-gold colors. The green-tints are normal and appealing. Although it does exhibit some wear, I prefer it to a few uncirculated Gold Sovereigns that I have examined. Though strong, the $42,500 result was sensible in a way that is hard to explain.

The large denomination gold coins (S-2613) during the second coinage (1604-19) of King James I are called Rose-Ryals in some reference guides, though do fulfill criteria defining Gold Sovereigns. Most of the obverse design depicts the monarch on a throne with a portcullis below it. There is an appropriate shield on a Tudorlike rose motif on the reverse. The weights of these, more than two-fifths of a Troy ounce, are in the right range.

James I gold coins of this variety (S-2613) have the trademark features of Gold Sovereigns (not Rose-Ryals). The CNG and Goldbergs auctions each contained one of these, variety S-2613. The NGC-graded EF-40 coin in the CNG auction was said to have been struck in 1605 or 1606. It brought $16,800.

The Goldbergs auctioned a better, large James I gold coin (S-2613), though of a slightly later press run, apparently having been struck in 1612 or 1613. It has minimal hairlines and contact marks. Although a thorough factual description of the coin might not sound terrific, this is a coin that needs to be seen in actuality to be understood. Technical factors and eye appeal contribute to a very positive impression. The NGC grade of AU-58 is fair and accurate. The $33,630 result is somewhat strong.

Although some 19th-century British Proof coins are more valuable than the just-mentioned Gold Sovereigns–as are some patterns that were offered during that same week from January 8 to 14–Gold Sovereigns are more widely recognized and played more of a role in history. Besides, I mentioned British Proof coins two weeks ago and in prior reports regarding auctions in New York each January. 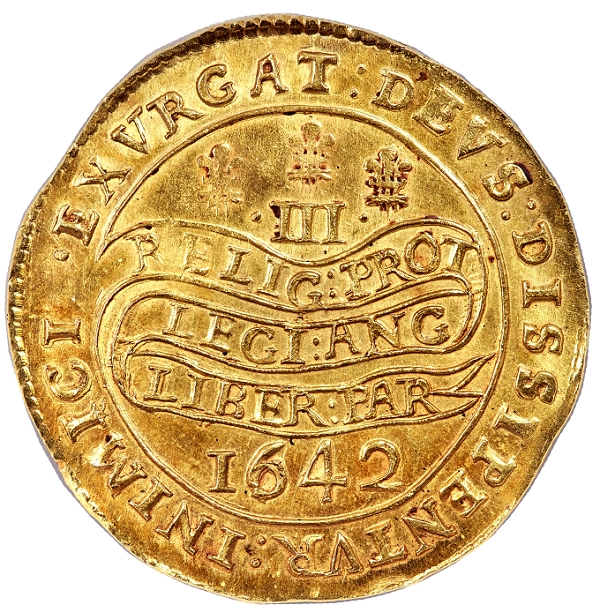 The auctioning of just one Triple Unite is a newsworthy event; six were offered in New York this month.

The NGC-graded AU-53 1642 Triple Unite in the Heritage auction was desirable. Despite a host of technical issues, the color is excellent, normal orange with green obverse inner fields and russet tinted outer design elements. This coin brought $132,000, a strong price.

This NGC-graded MS-62 Triple Unite has a blatantly apparent mint-caused defect; a chunk of the coin was never there. Mint-caused imperfections are not particularly bothersome to seasoned collectors, however, and could certainly be consistent with a 62 grade on a hammered coin from the 1640s. This coin has been subject to a harmful cleaning and there are some notable mishandling imperfections in the left portion of the obverse.

Indeed, the just-mentioned NGC-graded AU-53 1642 is of the same variety (S-2724). It brought $132,000 six days before the St. James auction in the same building, the Grand Hyatt next to Grand Central Station.

The 1643 Oxford Mint Triple Unite in the Heritage sale is famous. It is NGC-graded as MS-61 and the characteristics of this coin could be the topic of a separate article. While it is a hard coin to grade, U.S. coin experts would probably find the MS-61 assignment to be fair and accurate. The $204,000 result this month is around the same amount that the same coin realized in a St. James Auction in London in September 2011, £135,000 (approx. $193,031 USD).

The 1643 Triple Unite in the Baldwin’s of St James sale was un-certified and has the details of an AU-grade coin. The $55,200 result was a fairly solid price for it.

The 1644 Triple Unite in the CNG auction was NGC-graded AU-50 and realized $66,000. Its surface quality is typical of that of a large gold coin of the era.

All the Triple Unites offered at auction in New York this month were struck at the Oxford Mint. Early in the English Civil War, the Parliamentarians drove the forces of Charles I from London.

At 60 shillings (£3), a Triple Unite has the highest face value of any hammered British coin. While losing ground in the English Civil War, King Charles I was determined to announce that he was still in charge and that the Royal Treasury was healthy.

In the British Isles, machine-struck (‘milled’) coins tend to be much thicker and have smaller diameters than hammered coins of similar weight. The wafer thin edges and large diameters of Gold Sovereigns and Triple Unites provided much room for elaborate designs, which communicated political concepts and announcements. In eras before television or even photography, especially during times when ‘printing’ was very expensive, large coins played a central political role.