Recently, a collector’s accumulation provided insight into a rare pattern set from Mexico. The first Proof Set offered by the Mexico City Mint was released in 1983 and contain coins dated from both 1982 and 1983, along with a Proof 1983 Silver Onza, or Libertad – the first Proof issue for the now-popular bullion series. However, prior to this, a pattern Proof Set was produced from the Mexico City Mint with a mintage of only 50 pieces.

An accumulation recently came to market containing four examples of these rare pattern Proof Sets. Of the four examples, there were two different forms of packaging. One set came in a white box similar to the normal Proof Set, and three came in a blue card within an unsealed snap-together plastic holder. The white boxed set included a collector card adhered to the box noting that only 25 such sets were issued from the original mintage of 50 sets. However, this information hasn’t been verified.

What was different between the pattern Proof Set and the normal issue, besides the packaging, is the coinage contained within.

Both the 20 centavos and 50 centavos coins are versions that were not included with the regular-issue sets. The regular Proof Set contains the version of the 20 centavos featuring the portrait of Francisco I. Madero, while the pattern set contains the Mesoamerican culture’s Olmec giant head statue. The 50 centavos regular Proof issue is that of the portrait of Cuauhtémoc, when the pattern set includes the Mesoamerican culture bust of Pakal the Great of Palenque. The pattern Proof Set is also lacking the Onza or Libertad, which was included in the Proof Set.

Aside from the design differences, the finish and cameo are also different on all coins included in the set. The regular-issue Proof Set offers a deep cameo effect on the reverse of the coins while the pattern-set coins have almost no cameo contrast against brilliant reverse fields. 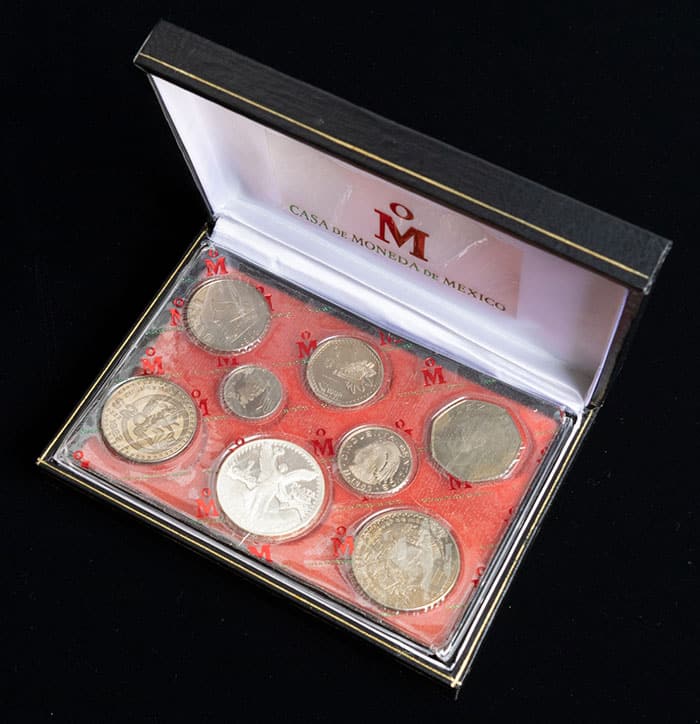 PCGS has carefully cataloged these pieces and recognizes the pattern Proof Set issues as patterns when they are submitted.