By Mark Harvey for PCGS ……

Up, up, down, down, left, right, left, right, B, A… If that code is still burned into your brain like it is mine some 20 to 30 years after last using it, you probably spent many an afternoon, and evening (and, let’s face it, late night) playing videogames.

Growing up during a time when many different systems were released, and with a 100% chance of attending multiple birthday parties at the local arcade for a few years, it’s hard to remember a time when retro games were hotter than they are right now. Even the field of numismatics is seeing celebrations of several different titles that were released over the last 40 to 50 years. The first two coins reviewed here pay tribute to videogames that pretty much everyone has heard of, and, it’s safe to say, would go on a list of most played games of all time: Pac-Man and Tetris. Both Pac-Man and Ms. Pac-Man received 40th-anniversary commemoratives from Niue in multiple denominations in 2020 and 2021. With countless variations it should come as no surprise that Tetris has also been honored on gold, silver, and colorized coins.

Outside of Final Fantasy (because as anyone who has played entries from that series can tell you, those games never end), it’s very likely that the most time logged on my Super Nintendo was dedicated to Street Fighter II and Mortal Kombat. Both are still seeing console releases to this day and there is a sequel to the 2021 Mortal Kombat film currently in the works. So of course, both of these iconic fighting franchises would be immortalized in coin form. Street Fighter has seen a greater variety of numismatic offerings with gold and silver pieces featuring Ken, Ryu, Chun-Li, Bison, and my personal archnemesis, Vega. Three of the aforementioned characters also received Chibi Proof versions. 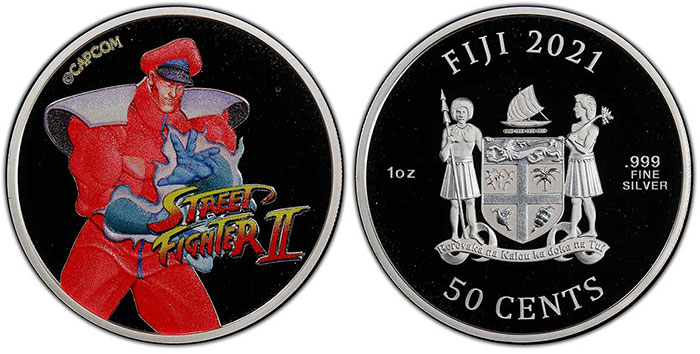 The vast majority of coins honoring pop culture and entertainment come from outside North America, though a number have come from Canada. However, videogame pioneer and owner of U.S. Patent No. 3,728,480 Ralph Baer was honored in 2021 on the New Hampshire American Innovation Dollar. Baer was inducted into the National Inventors Hall of Fame in 2010. He is primarily known for his role in developing games for the Magnavox Odyssey Home Video Game System in the early 1970s. 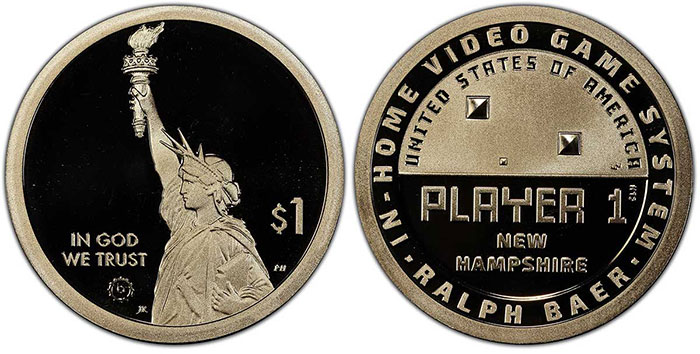 It’s not just vintage videogames that are receiving coins. The Halo series, which was first released in 2001, saw coins celebrating the franchise’s 20th anniversary. There’s certainly been no shortage of gaming innovations and games that have transcended into the global consciousness via live and/or animated series, movies, and even simply wild popularity. It will be interesting to see what console, title, or character will be commemorated in coin form next.