This new coin tells the story of the historical polder in the North Holland province, where the Dutch drained wetlands and converted it into a fertile agricultural area. This year marks the 20th anniversary of the Beemster as a world heritage site.

The Beemster Polder, is the first so-called polder in the Netherlands that was reclaimed from a lake when, from 1609 through 1612, its water was extracted by windmills. UNESCO calls it an exceptional example of reclaimed land in the Netherlands. Its well-ordered landscape of fields, roads, canals, dikes, and settlements laid out in accordance with classical and Renaissance planning principles has been preserved intact. Its protected monuments include religious, residential and farm buildings from the 17th to 19th centuries; industrial buildings (a mill, a smith, water authority buildings and bridges); and five forts built between 1880 and 1920 that were part of the Defense Line of Amsterdam. Cheesemakers say that the Beemster produces the richest and creamiest milk, which is handcrafted into its award-winning cheeses.

The coin’s obverse has the edges and lines of the Beemster landscape within a silhouette portrait of King Willem-Alexander. The reverse shows a map of the Beemster, also with edges and lines that define the landscape, along with some regional icons around the edge, including a cow and a stolpboederij, the bell-jar farm built between 1600 and 1640 that is typical in this region. It is characterized by a raised shed roof that evolves into a pyramid shape.

The mintage of the coin is strictly limited in silver proof and gold proof. In addition, the coin will be available in brilliant uncirculated quality in a numbered coin card. 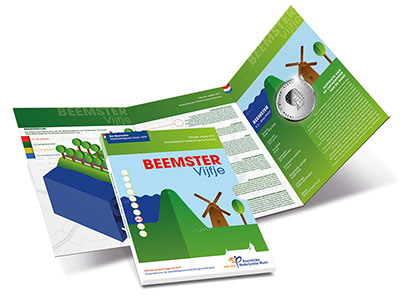