Atlas Numismatics has updated their website with 1,143 new coins, medals, and tokens at fixed prices. Selections include the following items: We note that this exact piece realized $6462 including the Buyer’s premium at public auction in September 2015. Attractive original toning, exceedingly rare in this quality and one of the finest surviving Bolivia pillar 4 reales. The rarest Anne five guineas after the 1703 VIGO issue. Superb deep copper toning, lustrous prooflike surfaces and exceptional eye appeal. We believe this piece is the equal of an NGC AU58 example of the date realized $216,000 including the 20% Buyer’s Premium at public auction in January, 2018 (Classical Numismatic Group, Triton XXI, 9 January 2018, lot number 1504). 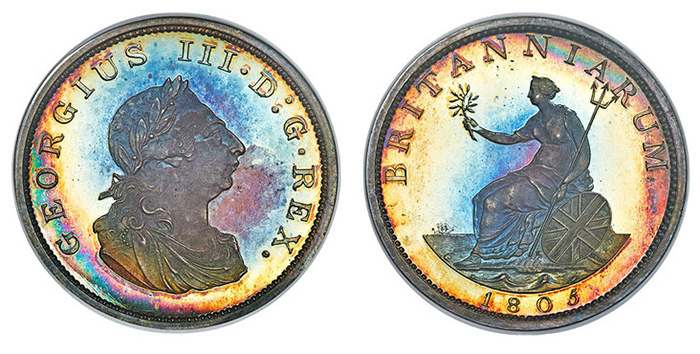 Produced from the original Soho Mint dies after the mint’s closure in 1848; Taylor produced but a handful of each pattern type, few of which can be truthfully dubbed ‘restrikes’ due to their die-combinations never having been produced prior to Taylor’s efforts. This present piece is one such pattern, as no currency Pennies were produced in 1805, and indeed the 1805 dated reverse die is one produced by Taylor himself by modifying an earlier type. An exceedingly rare type in silver and certainly the finest known. Awarded the star designation by NGC for exceptional eye appeal. We note that a PCGS PR63 DCAM 1826 Five Pounds (without the full set) realized $228,000 including the Buyer’s Premium at public auction in January, 2018. A superb set and extremely rare in this quality. 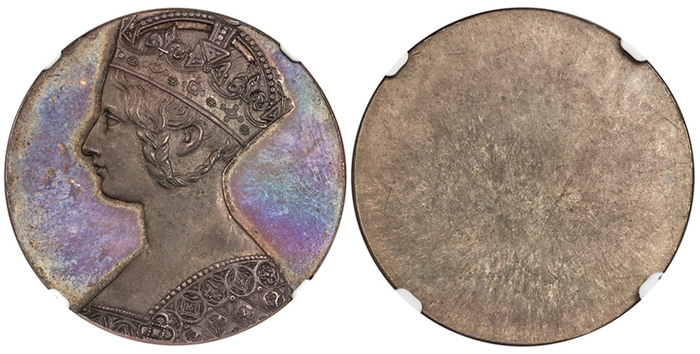 An exceedingly rare and almost certainly unique trial for the Gothic Crown. This piece is struck in sterling silver (.9614) and unlisted as such; Linecar and Stone notes a “Trial of Puncheon” in white metal as L&S-67 that sold in the Lingford sale (1950, lot 587) for £4 16s. and was described there as “Extremely fine and probably UNIQUE.” The portrait on this trial is of finer style and higher relief than the regular issue, with signficantly more detail on the crown, hair and bodice. In our opinion this was more likely struck in 1846 than 1847 or 1853, as it seems to be the prototype rather than the final design, likely engraved in more shallow relief to extend die life. Beautifully toned gem. This September Atlas Numismatics is offering a special 10% reduction on all of our older inventory items; please note that this reduction does not apply to items in the new upload. The sale will end on September 28.

Please also note that every coin listed on our website has our asking price and below that a button, “Make an offer or inquire about this item” We can listen to reasonable offers on each item or items you are interested in. We will consider each offer on a coin-by-coin basis, and then notify you by e-mail if your offer has been accepted. (No phone calls please.)

Offers will be accepted in the order in which they are received and items will be marked sold online as soon as they have been sold. Please also note that Atlas Numismatics offers a comprehensive no-questions-asked return policy on all website orders. If the coin you receive from us isn’t to your satisfaction, you may return items purchased for a full refund. Atlas’ full Terms & Conditions are available online.

Atlas will be attending the following numismatic convention.
Please stop by and say hello if you have a chance.

Located between Park and Lexington Avenues.

For more information and to sign up for the firm’s monthly newsletter, visit: atlasnumismatics.com