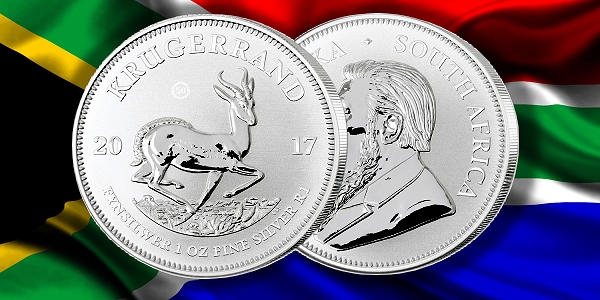 To celebrate the 50th anniversary of the introduction of the gold Krugerrand, the South African Mint minted its first-ever 1 oz silver Krugerrand. Additionally, a 1 oz platinum 10 rand Krugerrand was also released, as well as new sizes of the flagship gold coin.

The South African Krugerrand is one of the most famous coins in the world. Available as a gold coin since 1967, it is considered the first of today’s generation of modern bullion coins.

By the late 1960s, South Africa was the dominant force in world gold production. The global economy had almost completely weened itself off of the gold standard as a result of the Bretton Woods Conference at the end of World War II. The international monetary system would be delineated in US dollars while the United States would continue to back the dollar with gold. Anticipating both the ultimate end of this system and the gold standard in general (which indeed came in 1971 with the so-called “Nixon Shock“) and the presumption of private gold ownership in the united States–not to mention facing a surplus of gold as a result of its own success–the South African Mint and the Rand Refinery (established in 1920) decided to create a gold bullion coin.

On the front would be a portrait of Paul Kruger, an early 20th-century president of the South African Republic and an important political figure in national history. The back would feature a springbok, a type of antelope and a national symbol of South Africa. Taking its name from this portrait, as well as the primary monetary unit of South Africa (the rand), the Krugerrand was born. Interestingly, the coin bore no face value; the value of the coin was allowed to float according to the price of gold on the open market.

The gold Krugerrand consisted of one troy ounce of 22-karat (.9167 fine) gold, the same fineness used for the British Gold Sovereign, which, until the introduction and ready acceptance of the Krugerrand, was the dominant trade coin around the world. The remaining metal in the alloy was copper, which gave the coin its durability and distinctive orange-gold coloration.

The Krugerrand’s tremendous success with investors over the next decade inspired other nations to mint their own bullion coins, with the first “imitators”–the Canadian Gold Maple Leaf and the Mexican Gold Libertad–debuting in 1979 and 1981, respectively. In 1980, South Africa produced 1/2 oz, 1/4 oz and 1/10 oz versions of the coin.

To date, over 50 million ounces of gold Krugerrands have been sold.

The design of the Krugerrand’s obverse was borrowed from the 1892 South African gold pond coin, which was created under contract by Otto Schultz at the Berlin Mint in Imperial Germany because the mint in Pretoria was not ready for production. The central motif is a left-facing portrait of President Paul Kruger. He has a lengthy beard and connected sideburns but no mustache. The inscriptions SUID AFRICA and SOUTH AFRICA, separated by a small diamond shape longer than it is tall, wrap clockwise around the rim of the coin, starting in the lower left quadrant of the obverse. Pointed dentils surround the entire design The springbok takes center stage on the reverse, portrayed mid-stride with all feet in the air as it galavants over the savannah. The word KRUGERRAND arcs overhead. The motif was designed by South African sculptor Coert Steynberg. A special 50th-anniversary privy mark can be found in the field between the “G” in KRUGERRAND and the hind quarters of the springbok. Beneath the design is the inscription FYNSILWER 1 OZ FINE SILVER R1, which designates its weight, precious metal content and – in a first for Krugerrands of any kind – the face value.

The year 2017 is divided in half by the central motif, with “20” on the left and “17” on the right. As on the obverse, dentils are pointed inward as they encircle the entire side of the coin.

The edge of the 2017 silver Krugerrand is reeded.

Otto Schultz was an engraver with the Berlin Mint in the 19th century. South African sculptor Coert Steynberg designs graced many South African coins in the early and middle parts of the 20th century.