A year after the initial buzz… and then thud… of the release of a new dollar coin, the United States Mint continued its work to refine and improve Frank Gasparro’s design. A number of subtle changes were undertaken by the Mint’s engraving department, including a mid-year change in the quality of die steel used to strike the hard copper-nickel clad circulating coins.

That there was little demand for the large-format dollar did not dissuade the government from striking almost 170 million coins at the Denver and Philadelphia Mints. At Denver, coin production more-or-less went smoothly, while at Philadelphia, minor tweaks (and possibly die mixups) led to the creation of three major varieties, known by Ike collectors as 1972 Type I, Type II, and Type III dollars.

A second variant of the Eisenhower dollar was produced not for circulation but for collectors and was struck in a 40% silver-clad composition. Before 1965, all United States dimes, quarters, and half dollars were struck in a .900 fine silver composition. Dollar coins, not produced since 1935, would have also followed suit had production been ongoing. This changed with the passage of the Coinage Act of 1965, which removed silver entirely from dimes and quarters and reduced its fineness in the half dollar to 40%. The Act did one other thing as well. It prohibited the production of dollar coins until 1970, at which time Congress would reevaluate the need for such a coin.

The death of former President Dwight D. Eisenhower on March 28, 1969, gave dollar coin advocates a reason to support the release of a new coin, but a question remained regarding the continued use of the 40% silver composition. The Mint, for its part, was satisfied with removing silver entirely and assisted the Treasury in separating pre-64 silver issues from Federal holdings and melting down the obsolete coins. By the end of 1969, a majority of the silver dimes, quarters, and half dollars in circulation had been withdrawn by speculators, collectors, and the government.

A large faction in Congress supporting the production of a new dollar coin pushed for the Cu-Ni clad composition, but there were others, like Representative H.R. Gross of Iowa, who found the idea of a “scrap metal” dollar coin to be an insult to the memory of the former president. Gross’ opinions were shared by many in the Senate but stood in opposition to the prevailing sentiment of the House, which had coalesced around the cause of seeing to the complete removal of silver from American circulating coinage.

The compromise spelled out in the bill, signed into law by President Richard M. Nixon just before midnight on December 31, 1970, approved the striking of up to 150 million silver-clad dollars, drawing from Treasury stockpiles of silver for the coin’s production. These silver-clad coins would form the basis of the collector issues struck in Proof and Uncirculated formats at the San Francisco Assay Office.

The 1971 Uncirculated issue, as our previous CoinWeek profile points out, was a quality control disaster. And given the high price above face value that the Mint was charging for the coin, both the collecting community and the general public were not happy. The Mint explained these flaws by stating that the coins were produced in the same way as a regular coin would be struck for circulation, but that isn’t entirely true. Many of the 1971-S coins looked milky, with improperly prepared planchets. Author Rob Ezerman also points out that many suffered post-strike damage due to the careless way in which the coins were shipped from San Francisco to Denver for packaging.

Certified populations at PCGS and NGC bear out the story of how the 1972-S is a superior- quality coin. With 19,000+ submissions, the typical 1972-S certified by PCGS grades either MS66 or MS67, with 2,354 earning MS68. Today, the PCGS MS69 certified population stands at 26 pieces, an 11-piece increase from where this top-pop grade sat a decade ago.

At NGC, certified populations follow a similar trajectory, although NGC pops are significantly lower due to lower submission volume. At NGC, the overwhelming majority of all coins submitted (4,299) grade MS-66 or MS-67. 517 earn NGC’s MS-68 grade, while just seven have been put into MS-69 holders.

The highest price paid for a 1972-S Eisenhower dollar at auction is $3,680 USD, paid for a superior quality example offered at an April 2011 Heritage sale. A few have sold for slightly higher figures in private sales carried out between 2014 and 2016. With the rising population, the price for a top pop 1972-S Eisenhower dollar has softened somewhat, but we feel that the coin is stable at $2,800.

At more affordable price points, collectors have a decision to make. In grades MS67 and below, a certified Eisenhower dollar is simply a typical Blue Pack example housed in a trackable certified holder. Given the unstable nature of the original government packaging, there is a clear benefit to paying a small premium for an example in an inert holder. But given, the fact that at this grade, the packaging is the only thing that separates a certified coin from a typical example, the upside long-term is limited. We advise this grade only for collectors with serious budgetary constraints, or for those simply looking to build a typeset on a budget. For Eisenhower dollar Set Registry collectors, a better alternative is MS68 or MS68+. MS68 examples routinely sell for about $100. Do not be afraid to pay a slight premium for one that is particularly nice, especially one with CAC approval.

Prices for MS68+ examples have come down as the population in this grade has approached the total of all coins graded MS69. Here, you can have a coin that is for all intents and purposes on par with MS69 examples but for a deep discount. $500 seems to be the going rate, but a serious specialist would pay $1,000 – $1,500 for a superior example that would likely (one day) upgrade to MS69. 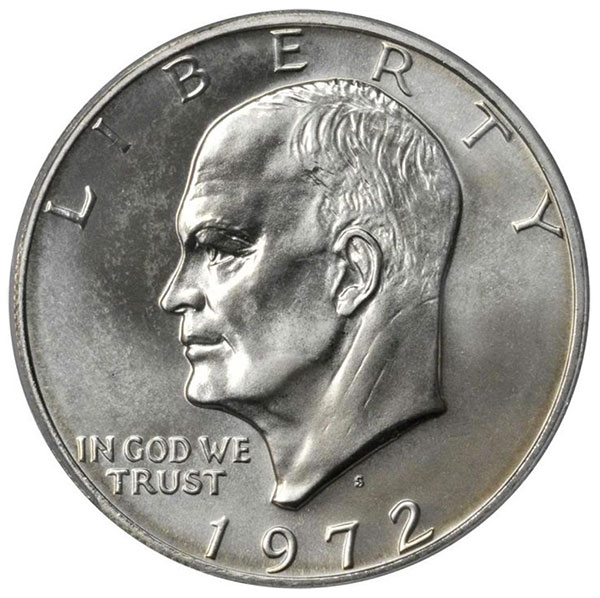 Gasparro’s portrait of Dwight D. Eisenhower (as President); Eisenhower facing to the left. Gasparro’s initials “FG” appear raised in the bust truncation. Beneath Eisenhower’s chin, to the left, is the motto “IN GOD WE TRUST” LIBERTY wraps around the top of the coin in the space between the rim and the top of Eisenhower’s head. The date wraps around the bottom of the design, between the rim and the bottom of Eisenhower’s bust truncation. While Philadelphia-struck pieces bear no mintmark, coins struck at Denver and San Francisco will bear small mintmarks of “D” or “S” above the space between the last two digits of the date and below Eisenhower’s neck. On Eisenhower dollars, mintmarks were hand-punched and may vary in exact location and orientation.

The edge of the 1972-S Eisenhower dollar is reeded.