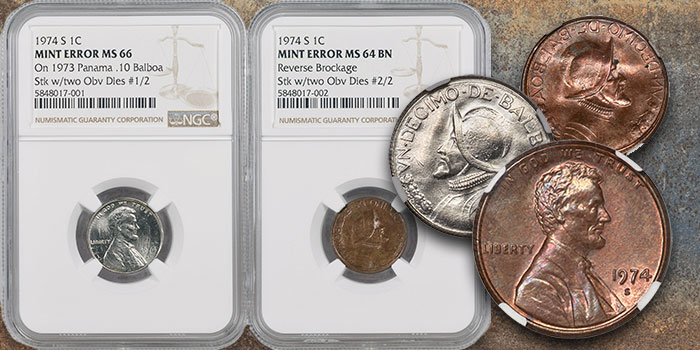 The United States Mint in San Francisco struck coins for Panama in 1973. In this mated pair, coin #1 is a 1973 Panama Tenth Balboa die struck both sides by the Panama dies on a U.S. clad dime planchet. In 1974, also at the San Francisco Mint, two obverse Lincoln Cent dies, both dated 1974-S, were paired together and installed in the same press. If a copper cent planchet had been struck by this die pair, a two-headed Lincoln cent would have been produced. To date, none have been discovered. This 1973 Tenth Balboa was placed in the collar of the press containing the two obverse dies for the 1974-S Lincoln Cent, on top of a copper cent planchet already seated in the collar. These were then subsequently struck together (mated).

Both “S” mint marks are different, proving that two obverse dies were simultaneously in the press together! NGC has authenticated and certified each cent as a 1974-S 1C since two different Lincoln cent obverse dies were used to create this mated pair.

As previously mentioned, there are a variety of U.S. coins known that were struck by either two obverse dies, two reverse dies or two muled dies of different denominations.

• (3) known Washington Quarters struck by two reverse dies; one of these is indented

• (19) known Sacagawea Dollars with reverse die muled with State Quarter obverse die in manganese, with one selling for $192,000 in a Stack’s Bowers auction certified by NGC

Also previously mentioned, there are no known two-headed or two-tailed Lincoln cents other than this unique discovery mated pair struck by two obverse Lincoln cent dies. It is also the only known mated pair of two-headed, two-tailed, or muled dies on any U.S. coin of any denomination! This off-metal mated pair that is dual dated from two different countries and struck by two Lincoln cent obverse dies in the same press is amazing. It stands alone in a class by itself in terms of rarity and fascination and combines an incredible and seemingly impossible set of circumstances creating this world-class mint error.