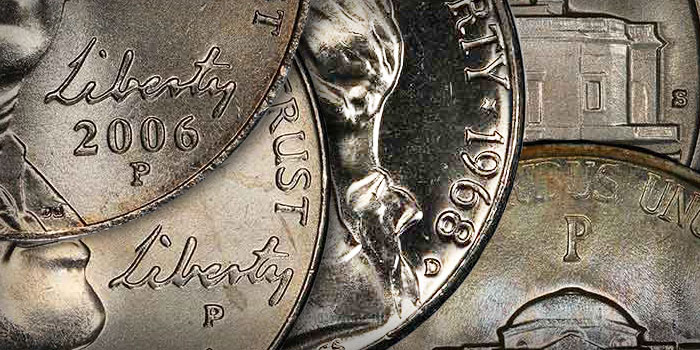 At least three United States Mint coins still in use today have seen two significantly different mint mark positions, including the Roosevelt Dime, the Washington Quarter, and the Kennedy Half Dollar – all of which saw mint marks at a certain spot on the reverses of the coins before this tiny feature was moved to their obverses. And as the mint mark (or lack thereof) usually indicates which branch of the U.S. Mint struck a coin and often denotes a coin to be common or rare, knowing where mint marks are located on any given coin is of great importance to the collector.

However, one coin still in use today has seen a grand total of five different mint mark locations over the course of its history. This coin is the Jefferson Nickel!

The Jefferson Nickel premiered in 1938 and branch-mint issues saw the inclusion of a mint mark on the reverse just to the right of Monticello, with “D” indicating coins struck in Denver and “S” symbolizing specimens from the San Francisco Mint. Originally, Jefferson Nickels lacking a mint mark signaled coins made at the Philadelphia Mint. However, things soon changed for the Jefferson Nickel, a coin traditionally consisting of a 75% copper, 25% nickel composition. Emergency materials rations during World War II led to the replacement of the original copper-nickel alloy in favor of one made from 56% copper, 35% silver, and 9% manganese beginning in 1942. To distinguish Jefferson “Nickels” struck with the silver composition, large mint marks were placed over the dome of Monticello, including a “P” for coins hailing from Philadelphia. This would become the first time that coins from the Philadelphia Mint ever carried a “P” mint mark.

In 1946, when use of the standard copper-nickel alloy resumed for the Jefferson Nickel, mint marks on returned to their former spot just to the right of Monticello. This continued through 1964, after which a pressing coin shortage spurred mint officials to temporarily remove mint marks from all U.S. coins to dissuade collecting activity beginning in 1965.

Three years later, in 1968, the coin shortage was alleviated, and mint marks reappeared on all new U.S. coinage as necessary. Although it wasn’t quite a resumption of the status quo. All mint marks on circulating coins would now be placed on the obverse, and in the case of the Jefferson Nickel the new spot was just below the coin’s date. In 1980, the “P” mint mark returned to the nickel after a 34-year absence. Beginning in 2004, the Jefferson Nickel saw a two-year commemorative series honoring the bicentennial of the Lewis & Clark Expedition, wherein explorers Meriwether Lewis and William Clark chartered western United States territories purchased under the tutelage of President Thomas Jefferson. To mark this commemorative subseries, fielding four special reverse designs, the obverse was modified in 2005 to show a new right-facing portrait of Jefferson. With this one-year-only change came a new obverse location for the mint mark, spotted just above the “2005” date and below the inscription “LIBERTY.” In 2006, a new permanent obverse design was paired with the return of the Monticello motif on the reverse of the Jefferson Nickel. The mint mark also saw a new home, its fifth distinct location on the long-running Jefferson Nickel, and this time back below the date where it remains today.