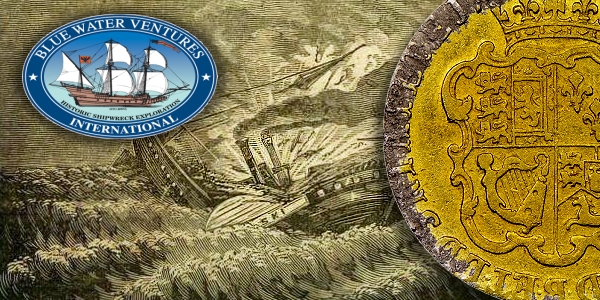 In January, marine exploration and recovery company Blue Water Ventues International (BWVI) announced that they had found the site of the shipwreck of the Steamship Pulaski, which sank off the coast of North Carolina 150 years ago.

Now the discovery has been confirmed.

Pulaski Findings May from BWVI on Vimeo

On May 9, Blue Water Ventures–along with their partner company Endurance Exploration Group–announced the recovery of artifacts that prove the remains do indeed belong to the ill-fated ship. After a “window” of good weather earlier in the month allowed Blue Water to return to the site, the diving team found new coins and artifiacts almost immediately. Several items are stamped with the name of the ship, including a candlestick holder that says “SB Pulaski”.

Blue Water Ventures CEO Keith Webb called the candlestick and other relics like it a “game changer” when he spoke to the Charlotte Observer last Wednesday. “I have believed for so long we were in the right spot,” he said, “and there’s nothing like the feeling of having something like this confirmed.”

The “right spot” happened to be about 40 miles off the coast of Cape Hatteras – more than 10 miles farther out than most historians had come to believe.

Dr. Joseph Schwarzer, a local historian and Director of the North Carolina Maritime Museums, was on hand waiting to see what else the team would recover from the site.

“That really is a smoking gun,” he said, referring to the Pulaski name stamped on the artifacts. “It’s like finding proof of something which was not just history, but almost legendary. This is empirical evidence. The wreck is no longer folklore, on the pages of a book. There is actually an object that proves it is out there.”

Blue Water Ventures International estimates that the Pulaski shipwreck harbors as much as $25 million USD in treasure. The company has already ecavated as much as $11 million worth of gold, silver, jewelry and other valuables from the site.

A mix of British, Spanish and American coins, all are dated from before 1838. A good number of examples of the Classic Head type of multiple gold denominations have been pulled from the wreckage, as have several silver dimes and half dimes. Among the notable finds from earlier in the year were an 1818 quarter and a large silver Mexican peso. The recovered coins are being conserved and graded by NGC/NCS.

Blue Water Ventures employed a combination of research and sonar equipment to locate the ship initially. The dive in May was facilitated by nitrox enriched diving equipment and training, which made extended dies possible and gave the team the ability to establish better working grids for on-site excavation.

Limited to shallow water exploration in the past, the Jacksonville, Florida-based company is now extending its reach into deeper waters off the coast of the United States. Their partnership with research, survey and recovery company Endurance Exploration Group will enable them to take advantage of the latter’s proprietary database of over 1,400 lost ships bearing valuable cargo.

About the Steamship Pulaski

Pulaski set sail from Savannah, Georgia on June 13, 1838, carrying mainly well-to-do passengers bound for points north. After arriving in Charleston, South Carolina later the same day, the ship departed for Baltimore, Maryland. According to an alleged survivor of the shipwreck as told to the Georgia Historical Quartlery in 1919, sometime before midnight on June 14 a boiler exploded onboard the ship, splitting the vessel in two. Approximately 128 people died; 59 survived.

The discovery of the ship’s final resting place may now enable archaeologists and historians to uncover what exactly happened to the ship that night one-and-a-half centuries ago.