The purpose of the United States Mint is to make money. And no, I don’t just mean striking coins for the federal government. According to its Annual Report, during the 2020 fiscal year, the Mint earned approximately $40 million USD in profit. This revenue was due to the Mint’s joint numismatic and bullion programs. Throughout its history, the Mint also had other sources of revenue, a major one being the production of both blank planchets and finished coins for foreign nations.

In an Act of Congress on January 29, 1874, the Mint was authorized to strike foreign coins. The act, barely a paragraph long, lays out the standards and restrictions.

Firstly, the foreign nation must apply to the Mint according to a process designed by the Secretary of the Treasury. Once approved, the applicant nation must provide the design and pay a fee set by the Director of the Mint and approved by the Treasury Secretary. This fee was to be sufficiently large to cover all required materials, labor, and other costs of production. Lastly, the Mint was directed to ensure that “the manufacture of such coins shall not interfere with the required coinage of the United States”.

While this practice was not considered official until early 1874, the Mint had already struck several types of foreign coins.

The first-ever foreign coin struck by the U.S. was a Liberia One Cent coin in 1833. This series was intended to help fund the Back to Africa movement, which many prominent white Americans supported because they believed that emancipated slaves could never live alongside their freeborn counterparts. This coin was not included in the U.S. Mint’s annual reports, probably because many people considered did not consider it a true coin but instead more of a hard times token or colonial script.

In 1855, the Mint also struck a series of gold pattern 2 Peso coins for Peru at its Philadelphia facility in preparation for the decimalization of Peru’s coinage. Despite the beauty of the 1855 pattern, Peru decided to modernize its own domestic mint in Lima with newly purchased steam-powered machines from England and not contract with the U.S. Mint.

The U.S. Mint struck foreign coins from 1874 until December 31, 1984, when the demand for domestic coinage became too great.

While all designs, specifications, and compositions were dictated by the contracting government, the United States would usually engrave the dies. However, there are some cases where the customer would give the dies to the Mint or contract with a third-party company to manufacture the dies. For example, in 1897 the Dominican Republic contracted the Paris Mint to engrave its 1 Peso dies, which were subsequently sent to the Philadelphia Mint for use. These coins actually bear the Paris Mint Mark “A”.

Even though this profitable business venture for the Mint would explode in the 1900s, before 1900 it was quite limited. Between gaining congressional approval in 1874 and the turn of the century, the U.S. Mint was contracted by only five countries to strike approximately 22.3 million pieces. The Philadelphia Mint would be used to strike coins for Costa Rica from 1897 to 1900, the Dominican Republic from 1896 to 1899, Ecuador in 1895, and Venezuela from 1875 to 1876. The San Francisco Mint on the West Coast struck coins for the Kingdom of Hawaii in 1883 and 1884.

All four denominations had the same design, with the obverse featuring a denticle border with an aged bust of Christopher Columbus in the center field. The legend AMERICA CENTRAL rings the top and the denomination is placed on the bottom. The reverse on all the types is centered on the National Coat of Arms of Costa Rica ringed but the countries name and the date at the bottom. Like the Costa Rican Colones, the design of all the denominations struck at the Philadelphia Mint for the Dominican Republic are the same. The obverse designs depict a left-facing bust of Lady Liberty wearing a stylized native headdress; the headband is engraved with the legend LIBERTAD. The denomination is placed against the denticled border to the left and the date to the right of the bust. The reverse is the Dominican Republic’s shielded Coat of Arms. The country’s name REPUBLICA DOMINICANA encircles the rim at the top of the coin, and the weight 5 GRAMOS at the bottom. The A mintmark for the Paris Mint is above the “A” in GRAMOS In the 19th century, the United States Mint struck coins for the Republic of Ecuador only in 1895. During this year, the Philadelphia Mint produced 5,000,000 pieces of the 2 Decimos (also known as the 20 Centavos) at a fineness of .900 silver. This coin is interesting for several reasons. Firstly, on the reverse, the U.S. Mint adhered to the Ecuadorean tradition of including the city of production in the design. Unlike a mintmark, the entire name of Philadelphia can be seen at the bottom of the reverse design in small letters. The U.S. Mint also struck Proof versions of this coin.

The obverse design depicts the highly recognizable bust of Antonia José de Sucre. Born in 1795, de Sucre fought against Spanish colonial rule alongside Simón Bolívar. Responsible for Ecuador’s victory at the Battle of Pichincha on May 24, 1822, forcing Spain to flee, de Sucre came to be known as the liberator of Ecuador. His bust is encircled by the country name REPUBLICA DEL ECUADOR and the date 1895. The reverse legends include the weight (G5), fineness (0.900), denomination, DOS DECIMOS DE SUCRE, Assayer initials “TF”, and PHILADELPHIA all circling the Ecuadorian National Coat of Arms. 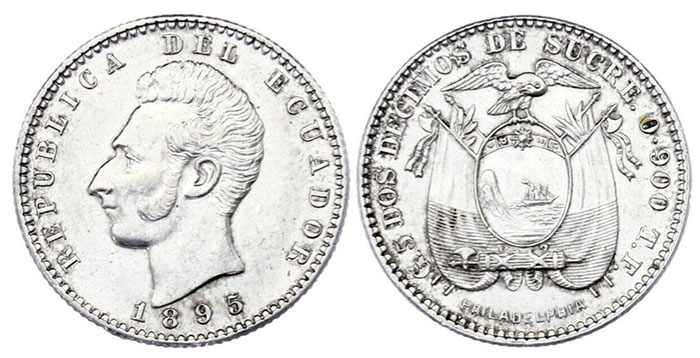 In 1875 and 1876, the U.S. struck two denominations for the Republic of Venezuela: 2½ Centavos and 1 Centavos coins. With mintages of 2,000,000 and 10,000,000, respectively, these were the two largest issuances of this early stage by the U.S. Mint for any foreign country. A mix of copper, nickel, and zinc, these coins have the national shield on the obverse with seven stars above on the obverse. The shield is ringed by the legend ESTADOS UNIDOS DE VENEZUELA and the date 1876. The reverse has a wreath that circles the denomination UN CENTAVO. Interestingly, the wreath on the reverse is similar to the wreath on the early U.S. large cent coins. While the Philadelphia facility produced most of the early foreign coins for the United States Mint, the San Francisco Mint struck the coins ordered by the Kingdom of Hawaii in 1883 and 1884. The Kingdom ordered 500,000 Dollar coins, 700,000 Half Dollar coins, 500,000 Quarter Dollar coins, and 250,000 Dimes – all of which were dated 1883. U.S. Mint Chief Engraver Charles Barber was responsible for producing the dies and the designs are similar across the denominations.