In the previous article the first free election of a Polish king was described. This article will deal with the subject of the second free election.

After the childless death of Stephen Báthory on December 12, 1586, another free election was required. The most important candidates to the Polish-Lithuanian throne were again – similarly to the free election from 1575 – the Russian Tsar, Fyodor I Romanov, the Austrian Archdukes: Ferdinand Habsburg and Ernest Habsburg, and the voivode of Sandomierz, Jan Kostka. New, notable entrants to potentially claim the throne included the Austrian Archdukes:  Maximilian III Habsburg and Matthias Habsburg, as well as the Swedish prince, Sigismund Vasa.

For the second time in a row the results ended with a double election – followers of the Jagiellonian tradition (e.g. Jan Zamoyski) chose the Swedish prince – Sigismund III Vasa, while the Catholic-magnate party for the king chose the Archduke Maximilian Habsburg. Troops of the Archduke entered the Commonwealth, claiming his rights to the Polish throne, but the army of Jan Zamoyski successfully defended access to Cracow, and then defeated Habsburg’s army at Silesia in 1588. Sigismund III Vasa, a grandson of king Sigismund I The Old, became the ruler of the Polish–Lithuanian Commonwealth. The largest country in Central Europe, and next to Russia and the Ottoman Empire – the whole of Europe, with an area of over 990,000 sqkm (which is equal to today’s area of Poland, Germany, Austria, Czech Republic and Hungary combined). When 21 years old Sigismund III Vasa took the Polish throne, the country was a military, political and economic power in Europe. Although Sigismund III Vasa fought for the Polish throne in 1587 against a dangerous rival, Emperor Maximilian Habsburg, he was not willing to conflict with this influential family. He quickly normalized his relations with the Habsburgs, which was expressed with a marriage to Anna, a daughter of Charles II Habsburg of Austria in 1592. Retrospectively, as a result of a lack of acceptance of the zealous Catholic Sigismund and his policies, Protestant Sweden was quick to depose him of the Swedish crown in July 1599.

In the first years of his reign in the Polish–Lithuanian Commonwealth, the new king was focused on efforts to protect (and on getting back at some point) his hereditary rights for the Swedish throne and even secretly tried to cede the Polish crown to the Habsburgs in exchange for a certain amount of money and their support in his attempts to regain the Swedish crown. This conspiracy was discovered by Zamojski, who became one of the staunchest opponents of the king’s policies. Subsequent years were marked with increased tension in the country, aversion to King Sigismund III Vasa from Polish noblemen, and constant conflicts with other countries. A long series of wars between the Commonwealth and Sweden (ending with a truce each time), that lasted with breaks until 1629 were run simultaneously alongside wars with Russia in years 1609-1618 and with the Ottoman Empire in 1620-1621.

Following a spectacular defeat of the Polish army in September 1620 after the three-day battle of Cecora (in today’s Romania), the Commonwealth stood on the brink of destruction. The upcoming Ottoman army was supposed to be stopped by the new Polish army, for which the collection of special high taxes were ordered in order to finance. Measures were also taken to obtain the support of the armies of the Cossacks, troops of Stanisław Lubomirski and of the prince Władysław Vasa. The Commonwealth and the Cossacks allied forces army counted 46,000-50,000 (various sources) and 28-50 cannons. On September 2, 1621 they faced the Ottoman army of 100,000-150,000 soldiers (various sources) led by the 17-year-old sultan Osman II and supported with 100 cannons. The battle took place from September 2 to October 9, 1621 at Chocim by the Dniester river, which was the border of the Commonwealth. The long and exhausting battles did not show a winner, and as Polish troops continued to successfully resist the larger Ottoman army, in the face of the approaching winter, both sides proceeded with peace negotiations and on October 9, a peace treaty was signed. Total losses on the Polish-Lithuanian and The Cossacks side amounted to 14.5 thousand (about 8,000 Poles and 6.5 thousand Cossacks), while the Ottoman Empire lost 42 thousand soldiers (about 40,000 Turks and Moldavians along with 2 thousand Tatars).

The most likely, but not the sole possible reason of minting this coin was to commemorate and honor the Polish victory over the Turks at Chocim. The battle of Chocim resulted with a peace treaty, because both sides of a battle were not willing to continue fighting a prolonged, onerous war. The upcoming winter was also a factor to cut off fighting for both sides as among other things it threatened supply lines. The conditions of the peace treaty do not represent those of a great military victory of Poland, but a compromise between the two armies. However, the Battle of Chocim may be considered to be especially important to be commemorated by minting such a distinctive, noticeable gold coin on account of its religious aspect. In 1621, for the first time in this period of European history, the invincible Ottoman power and the sultan’s dreams of further Islamic expansion into Christian countries were effectively hampered by the Polish-Lithuanian Commonwealth army.

The ultra-Catholic, king Sigismund III Vasa announced his religious victory by minting the 100-ducats gold coins, to mark the power and majesty of the Polish-Lithuanian Commonwealth under his rule and domain. That of a powerful crusader and defender of Christianity against the Muslims in Europe. 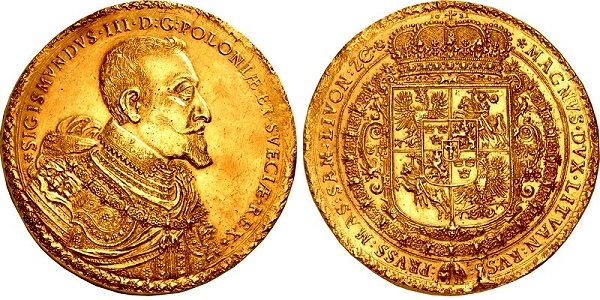 On the obverse we find the bust of the king Sigismund III to the right, in ornamented armor with a late collar and the commander’s sash. Around the neck lies the collar of the Golden Fleece. Below the bust lie the letters S. A. (Samuel Ammon, die -sinker). The date of 1621 is punched three times on the obverse. The legend reads: * SIGISMVNDVS • III • D : G : POLONIÆ • ET • SVECIÆ • REX *

The reverse shows the crowned coat of arms of the Polish–Lithuanian Commonwealth under the Vasa dynasty. All elements are enclosed in the collar of the Golden Fleece with an oak wreath around. The legend around reads: *MAGNVS•DVX•LITVAN:RVSS: – :PRVSS:MAS:SAM:LIVON:ZC’* In the field some elements – date twice, as well twice S-A and once II-VE initials – are minted in very minute figures.

Combinations of the obverse and reverse legends on the coin are giving the full king’s official name and title, which is titled: “Sigismund III, by the grace of God, king of Poland, grand duke of Lithuania, Ruthenia, Prussia, Masovia, Samogitia, Livonia and also hereditary king of the Swedes, Goths and Wends”. Due to a lack of precise names of the Goths and Wends, they were punched in as ZC (for the Latin zetera et cetera, means “and the rest” here) in the reverse. 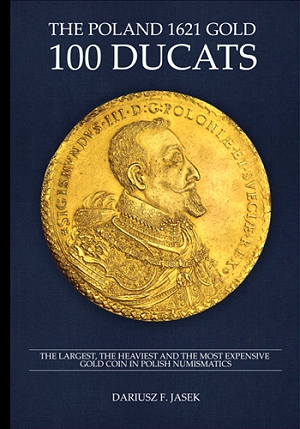 A copy sold in the Classical Numismatic Group Triton XXI auction on January 10, 2018 is probably the finest of all copies known of this coin. Previously sold in 2008 Stack’s sale (Kroisos Collection) with the realized price of $1,380,000, incl. Buyer’s Premium fee, became the highest price to date for the World coin. Through past appearances this coin was sold for $2,160,000, incl. Buyer’s Premium fee, hitting this way a new historical record for the World coin and became the most expensive Polish coin ever minted.

Detailed information on this piece, with descriptions and a concrete history of all specimens known to exist – in museum, private collections as well as those sold in auctions – with almost all of them pictured in high quality, will be published in a book by Dariusz F. Jasek, entitled “The Poland 1621 gold 100 ducats”, available by February 2018 on goldducats.com website. The book will also include a historical background of this coinage, analysis of all dies known, strikes in silver, and many more.