COINAGE IS CONSERVATIVE. IF a denizen of ancient Rome picked up a modern American dime, he would recognize familiar symbols: a torch, an olive branch, oak leaves. He could even understand the Latin motto E PLURIBUS UNUM (“Out of Many, One”).

Similarly, if that ancient Roman picked up a British 50 pence coin, the reverse image of a seated goddess wearing a crested helmet would be immediately recognizable as Minerva (or Athena to a Greek).

Modern Greeks take pride in their ancient heritage and the notable personalities of the ancient Greek world, and themes appear on many coins of modern Greece (kingdom 1832 – 1924, 1935 – 1973; republic since 1974). The owl of Athena, from the reverse of the Athenian tetradrachm, is featured on the 1973 1 drachma piece (KM-107). Pegasus, the characteristic emblem on ancient coins of Corinth, appears on the 5 drachma piece (KM 109) of the same year. 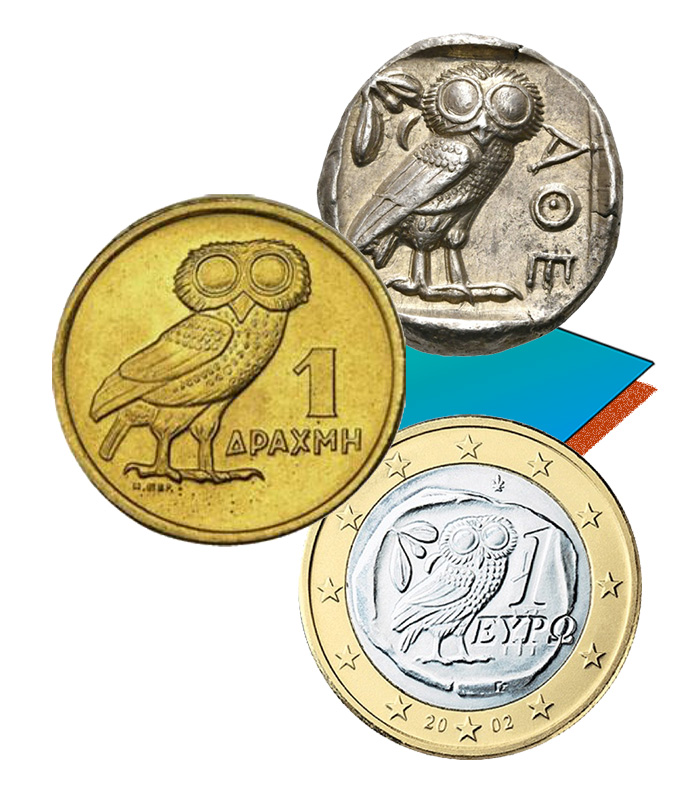 When Greece introduced its euro coinage in 2002, an Athenian tetradrachm adorned the reverse of the bimetallic 1 euro piece. An image of Europa and the bull appears on the 2 euro piece. According to myth, Zeus transformed himself into a magical white bull to win the affection of a beautiful Phoenician princess, Europa[1]. When Europa climbed on the bull’s back he carried her away to Crete. She later gave birth to King Minos and gave her name to the nearby continent. The image of Europa and the bull appears on many ancient Cretan coins, notably a drachm of the city of Gortyn, c. 250 – 200 BCE[2]. Europa is usually shown with her garments billowing in the wind as the bull races across the sea.

The island nation of Cyprus has also copied ancient designs on its modern coins. The reverse of the 1991 Cypriot 50 cent (KM 66) copies a rare early-fourth century BCE silver stater of Timocharis, king of Marion, with Europa and the bull[3]. A handsome 20 pound gold commemorative (KM 68) copies the sphinx on the reverse of an archaic silver stater of Idalion c. 470 – 460 BCE[4].

“Victor Emmanuel III was one of the most prolific coin collectors of all time, having amassed approximately 100,000 specimens dating from the fall of the Roman Empire up to the Unification of Italy… Between 1910 and 1943, Victor Emmanuel wrote the 20-volume Corpus Nummorum Italicorum, which catalogued each specimen in his collection.”[5]

Modern Italy has often drawn on classical art for the design of its coinage. A superb early 20th-century example is the large silver 5 lire piece of 1914 (KM 56), which shows a quadriga (four-horse chariot) bearing the goddess Minerva, who holds a shield and olive branch. I found no exact ancient match for this image, but the quadriga was an immensely popular subject in ancient art. Greeks and Romans were passionate chariot racing fans, and the most talented artists competed to create dramatic racing scenes. Compare the reverse of a tetradrachm of Katane (now Catania, Sicily) c. 410-405 BCE by the famous engraver Euainetos[6].

The Italian 10 lire (KM 90) of 1946 bears a leaping Pegasus, another enormously popular image on ancient coinage. The mythic flying horse also appears on coins of Syracuse[7], and many issues of the Roman republic[8].

The humble aluminum 2-lire piece of 1946 (KM 88) shows an ear of wheat with one leaf. This was the civic emblem of the city of Metapontum (now the small town of Metaponto in Basilicata) and it appeared for centuries on its coins[9].

In 1923, while excavating the foundations for a new bank in Bratislava (historic capital of Slovakia on the Danube,) workmen unearthed a hoard of silver coins issued by the Boii, a Celtic tribe, in the first century BCE. Many of these coins bear the image of a rider holding a leafy branch. The name BIATEC is inscribed below in bold letters, presumably the name of a king, otherwise unknown to history[10].

This was the earliest evidence of writing in Slovakia, and the coin appears on the 1993 Slovakian 5 korun piece (KM 14).

The state of Israel has often turned to ancient Judean coins for the design of its modern currency, which has gone through frequent modifications and denomination changes.

The 1 New Shekel of 1985 (KM 160) closely copies the stylized lily flower that appears on a rare, tiny silver half-gerah “Yehud” coin (Hendin, 1060) issued under Persian authority before Alexander the Great’s conquest of the area in 333 BCE[11].

The little 5 Agorot of 1988 (KM 194) bears an exact copy of the one-eighth shekel[13] coin of Year 4 of the Jewish Revolt (69-70 CE). The design shows a lulav, a bundle of palm, myrtle and willow branches between two citrons (etrog, a fruit valued for its fragrant peel) – ritual objects used in the observance of Sukkot, the Hebrew harvest festival.

The 10 Agorot of 1985 (KM 158) copies one of the rarest and most prized Judean coins, the elusive menorah prutah of Mattatayah Antigonos, the last Hasmonenan ruler, struck at Jerusalem in 37 CE[14]. Fewer than 30 examples of this coin (Hendin, 1168) are known. The Old Testament describes the golden seven-branched lampstand of the Jewish Temple, in great detail[15]. It was so holy that it was rarely depicted in art, and it did not become a symbol of Judaism until centuries later, after the Romans had destroyed the Temple and carried off the sacred menorah as loot.

The date palm tree was a characteristic emblem of ancient Judea, appearing on the famous “JUDAEA CAPTA” coins of Vespasian and Titus. Israel’s bimetallic 10 New Sheqalim of 1995 (KM 270) copies the reverse of the bronze half shekel of Year 4 of the Jewish revolt (Hendin, 1367). The palm, with heavy clusters of dates, stands between two full baskets of fruit, a poignant image considering that the coin was struck in a starving city under siege. A superb example of this type brought $20,000 in a 2012 auction[16].

Admired by numismatists for technical excellence and creative design, the Austrian Mint has created some spectacular coins that copy ancient pieces. An Austrian 100 schilling silver commemorative issued in 2000 (KM 3068) copies the reverse of a Celtic silver coin[17] of the second or first century BCE from Noricum, the eastern part of modern Austria. A rider holding a lance gallops to the right. Circles above and below the horse may be solar symbols, common on Celtic coins. The inscription – ADNAMATI – is presumably the name of a ruler.

For collectors of ancient coins, modern coins that reproduce ancient designs provide an interesting, and often very inexpensive sideline. The coins listed here are only a sample. Many additional examples could be found with a bit of research and luck.