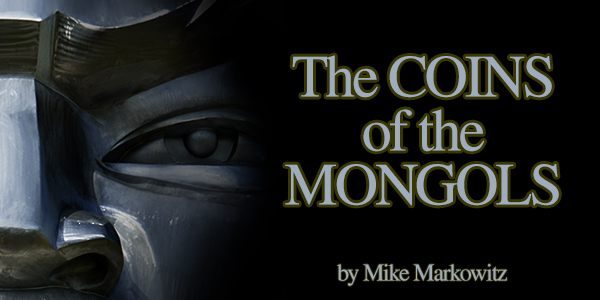 The couriers of the Khan galloped over fifty degrees of longitude, and it was said that a virgin carrying a sack of gold could ride unharmed from one border of the nomad empire to the other.

The Rise of The Mongols

ABOUT THE YEAR 1162, a man named Temujin was born into a nomadic tribe living in the rugged northern highlands of Mongolia. A rival group murdered his father, the tribe scattered, and Temujin was brought up in poverty by his mother, Hoelun.

In 1206, he united the Mongol tribes, receiving the title “Genghis Khan” meaning “universal ruler”. For the next two decades, he led the Mongols to conquer much of Eurasia. When he died in 1227, the Mongol Empire covered 24 million square kilometers (9.25 million square miles). His grandson Kublai became emperor of China in 1271, founding the Yuan Dynasty, which lasted until 1368.

As nomads, the Mongols had little use for money. They measured wealth in horses, sheep, and cattle. They valued well-made weapons, bridles, and saddles. But when they came to rule the sophisticated urban economies of central Asia, Iran, and China they had to adopt forms of currency that were familiar and acceptable to these populations.

Coins of the Mongol Empire, therefore, fall into two categories.

Coins for use in Muslim areas follow the well-established pattern of Islamic coinage: gold, silver, and copper denominations with Arabic inscriptions and geometric decoration.

Coins issued for East Asian parts of the empire look Chinese – mainly cast bronze with a square hole in the center.

But there are exceptions to these patterns, many of great rarity and historic interest. A wide variety of languages and writing systems appear on the coins of Mongol rulers, and while there were no portraits there are occasional pictorial designs.

In 1219 Genghis Khan, infuriated by the murder of his envoys, invaded the Khwarezmian Empire, a Turkic Islamic dynasty that ruled much of Iran and central Asia. The great cities of Samarkand, Bokhara and Urganj were sacked, their populations brutally massacred[2]. With the devastation and depopulation of the region, you might imagine that there would be little need for coinage, but Central Asian cities seem to be able to spring back out of the dust. Many of the surviving coins in the name of Genghis come from mints in Afghanistan, such as Kunduz and Ghazna (there were silver mines in the region).

The gold and silver issues bear the Khan’s name on one side[3], and an Arabic inscription with the name and titles of the Muslim caliph, a powerless figurehead under the thumb of warlords in distant Baghdad, on the other.

The Mongols themselves mostly worshipped the sky and the earth; their religion is often described as “Shamanistic.” Some were Nestorian Christians, some later adopted Taoism or Buddhism[4]. So the appearance of a caliph’s name as “Commander of the Faithful” (amir al-mu’minin) on Mongol coinage was no acknowledgment of his authority.

Chingiz Khan neither wanted nor received approval from the current caliph, and his purpose was certainly not to further the cause of Islam… The Mongols in this initial period probably understood his position to contain spiritual attributes, and to be the arbitrator of justice for the particular code under which the conquered people lived (40).

The only silver coin type bearing the name of “The Just, The Great, Genghis Khan” in Arabic was a dirhem of about three grams, first issued around 1221.

In 1258, when Hulagu Khan, grandson of Genghis, captured Baghdad, he had the caliph, al-Musta’sim Billah, rolled up in a carpet and trampled to death by horses[5].

Fragmentation of the Empire Genghis Khan died in August 1227. There are no coins in the name of his eldest son Jochi, who died in February of that year.

Ogedei, his third son, succeeded him as Great Khan, but the empire was effectively partitioned.

Batu, son of Jochi, led the “Golden Horde”, which controlled the Russian steppes. Chagatay, the second son, ruled much of central Asia. Tolui, the fourth son, ruled the Mongol homeland. When Ogedei died in 1241, his wife Töregene (or Torakina) became regent for about five years as Great Khatun (khatun is the feminine form of khan).

A remarkable series of coins were struck during Töregene’s reign, mainly in the Caucasus, Northern Iran, and Anatolia. They depict an archer on horseback drawing his bow. On some examples, he appears to be shooting at a goose, on others an eagle or a star.

The inscriptions omit her name.

Batu Khan died in 1256, and his brother Berke took over the Golden Horde. The coinage of this period was minted at Saray on the lower Volga river. These small, crudely-struck silver pieces weighing less than a gram bear Batu’s tamgha[6] or clan symbol–a double-ended trident (reminiscent of Zeus’ thunderbolt or Indra’s vajra)–on both sides. Jani Beg, Khan of the Golden Horde from 1342 to 1357, placed the image of a lion (looking like a rather scruffy dog) on some of his coins.

Plagued by civil wars and factional conflicts, the Golden Horde eventually fragmented into rival khanates that were gradually absorbed by the Ottoman and Russian Empires.

Hulagu (ruled 1256 – 1265), son of Tolui and grandson of Genghis, founded the Ilkhan dynasty, which ruled Iran and much of the surrounding region for a century (1256 – 1357, although for the last few decades Ilkhan rulers were puppets of local warlords).

During this century, thousands of different coin types were issued, many of high technical and artistic quality. Ilkhan die-cutters excelled in designing elaborate geometric borders and richly ornamented inscriptions.

Hulagu was succeeded by his son, Abaqa (ruled 1265 – 1282). Abaqa’s coins are often bilingual, with a religious inscription in Arabic on one side and the ruler’s name and titles in Uighur (a Turkic language with its own alphabet) on the other.

Abaqa may have converted to Nestorian Christianity. Some of his coins, minted in Christian areas like Georgia and Armenia, bear a cross with the Arabic inscription “In the Name of the Father, and the Son and the Holy Spirit, One God”.

The seventh Ilkhan, Ghazan “the Great” (ruled 1295–1304), converted to Islam when he took the throne. A cultured man of many interests, Ghazan spoke Chinese, Arabic, Mongol, and possibly Latin.

Abu Sa’id Bahadur, the ninth Ilkhan (ruled 1316-1335), came to the throne as a child. His handsome silver coins, issued in several denominations, are relatively common and affordable. He died along with his sons in a plague that may have been an early stage of the Black Death that later ravaged Europe (1346 – 53). The dynasty never recovered.

Into China: The Yuan Dynasty

Kublai (or Qubilai) was the fourth son of Tolui and thus a grandson of Genghis. He became Great Khan in 1260 following the death of his brother Mongke. He defeated his younger brother Ariq Böke in a civil war, made peace with Korea (which ferociously resisted a series of Mongol invasions between 1231 and 1270) and launched unsuccessful attacks on Japan (1274, 1281).

The earliest Mongol coins may be very rare cast silver pieces (about 2.5 grams) with a square hole in the center and four Chinese characters on one side (Ta Chao Tong Bao) meaning “Great Dynasty Currency”. Examples have been found at Karakorum, the capital of the Great Khans in Mongolia. Some experts attribute these to Genghis Khan (before 1227); others argue that they were produced under Kublai (ca. 1260 – 1280). About 250 examples are known. In a 2012 auction one sold for US$1,350 (Stephen Album Rare Coins Auction 14, Lot 851).

The complex Chinese written characters were unsuitable for writing the Mongol language, and Kublai commissioned a Tibetan monk and court official named Drogön Chögyal Phagpa to design a universal alphabet of 36 letters[7] that could be used for all the languages of the empire. This intricate, angular script appears on many coins of the Yuan dynasty, either alone or in combination with Chinese characters.

Mongol rulers of China experimented with larger denomination cast bronze issues (three and even 10 cash) and eventually came to rely on paper money, causing cycles of inflation that contributed to the fall of the dynasty in 1368.

Many collectors would like to own a coin of the famous Genghis Khan. Even the humble copper jitals can sell for a few hundred US dollars in high grade, and the gold and silver issues command high auction prices, especially if the Khan’s name is clearly legible.

For collectors on a more modest budget, we might note that Genghis Khan’s portrait appears on modern banknotes of Mongolia.

The only comprehensive modern catalog of the coinage of the Mongol Khans is Nyamaa (2005), a privately-published, bilingual English/Mongolian edition (the English is a bit rough). It’s out of print, apparently, but copies can be found for $85-100.

The standard references on the coins of the Ilkhans are expensive: Diler (2006) and Album (2001). Plant (2000) is the essential “must-have” book for anyone interested in Islamic coinage.

For Chinese coins of the Yuan Dynasty, Hartill (2005) is a good reference for beginners. 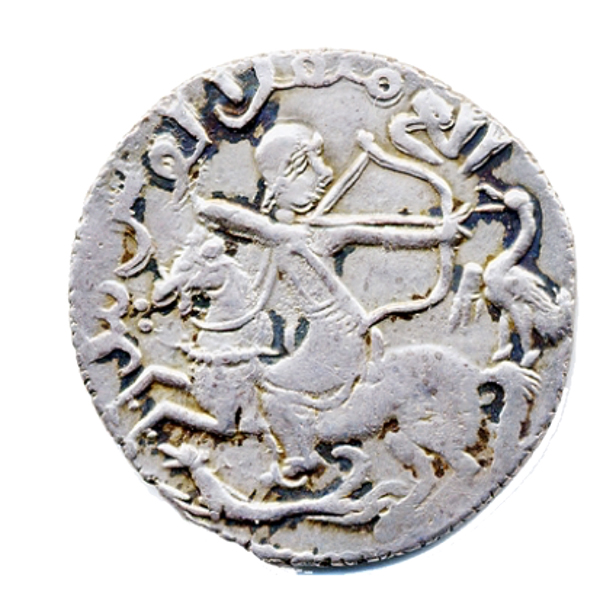 [1] Transliteration of Mongol names is an endless source of confusion. “Chinggis” is closest to the Mongolian pronunciation, but “Genghis” and “Jenghiz” are common spellings in English.

[2] The Mongols were usually careful to spare “artisans” who had useful skills, and resettle them, however.

[3] As with many Islamic coins, the distinction between “obverse” and “reverse” seems to depend on the whim of the cataloguer.

[4] Many modern Mongols (53%) practice a form of Buddhism strongly influenced by Tibet (https://en.wikipedia.org/wiki/Mongolia)

[6] The tamgha was originally a distinctive cattle brand used by each Mongol clan. In a non-literate society it functioned as a symbol of identity, appearing on banners, coins and other objects.

Album, Stephen. Iran After the Mongol Invasion. Vol. 9. Sylloge of Islamic Coins in the Ashmolean. Oxford (2001)

Dawson, Christopher. Mission to Asia: Narratives and Letter of the Franciscan Missionaries in Mongolia and China in the Thirteenth and Fourteenth Centuries.
New York (1955)

Nyaama, Badarch. The Coins of Mongol Empire and Clan Tamghas of Khans (XIII-XIV). (in English and Mongolian) UlaanBaatar (2005)

Smith, J.M. and Francis Plunkett. “Gold Money in Mongol Iran”, Journal of the Economic and Social History of the Orient 11 (1968)

Weatherford, Jack. The Secret History of the Mongol Queens: How the Daughters of Genghis Khan Rescued His Empire. New York (2010)