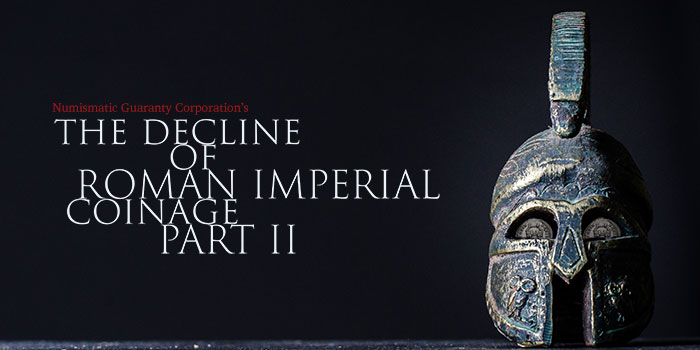 In the previous column (Part I), we saw how the quality of silver coinage of the Roman Empire declined steadily from the reign of Augustus (27 BCE to 14 CE) to that of Gallienus (253 CE to 268). The Augustan denarius was of consistently good weight and high purity (about 98%), whereas three centuries later its successor coin, the double-denarius (antoninianus), was a coin of erratic weight that often contained as little as 2.5% silver.

In this column, we’ll track the evolution of Roman silver for the more than two centuries that remained before the Roman Empire fell to Germanic soldiers.

From the low point of Gallienus, Rome’s fortunes steadily increased. Even so, the double-denarius still remained at about 2.5% silver for the next few years. Then, in 274, the immensely successful emperor Aurelian (270 to 275) upgraded Rome’s ‘silver’ coinage by abandoning the double-denarius and replacing it with an entirely new coin – the aurelianianus (usually called an ‘antoninianus’).

The new coin was similar enough in its design that most specialists don’t bother to distinguish between the double-denarius and the aurelianianus. But they’re definitely different coins, with the latter being struck to a much better standard of quality: the flans are no longer misshapen and ragged, but are broad, round and consistent.

Even more importantly, the aurelianianus contained about 4.5% to 5.0% silver – a significant increase. In reflection of this, aurelianiani bore the inscription XXI (Latin) or KA (Greek), which suggest the formula 20-to-1, and thus a declaration of a 20-to-1 ratio of copper to silver (equaling a target content of 5% silver).

The aurelianianus was struck by a succession of emperors for about 20 years afterward, during which time the purity gradually slid to a low point of about 3% silver.

Then, perhaps in 293, the aurelianianus was abandoned in a sweeping monetary reform of the emperor Diocletian (284 to 305). He produced a coin that looked very much like the aurelianianus (though without the XXI or KA formula), but essentially had no silver; it usually is called a ‘post-reform radiate’.

As part of the same reform, Diocletian introduced a new silver coin, the argenteus, which harkened back to a bygone era. Argentei were of a very high purity (at least 90%) and were struck at 96 to the Roman pound, the weight of a post-reform denarius of Nero (54 to 68).

However, the Roman economy was not ready for such a utopian reform, and most argentei disappeared from circulation soon after entering the marketplace, either by being hoarded or by being exported to the East in trade.

Diocletian also created another new coin, the nummus (follis), a large, heavy coin containing a target content of 5% silver. Indeed, some of his nummi–including the one shown above, from the mint of Alexandria–bear the same XXI formula which earlier had appeared on the now-abandoned aurelianianus.

Whereas the argenteus failed because of its virtues, the low-value nummus thrived. Even though it had a very low silver content, it had a substantial coating of silver, which gave it a more formidable appearance.

The nummus was struck for more than 60 years, though at an ever-decreasing weight and purity. Collectors assign a variety of names to the later incarnations of this denomination, including reduced nummus, AE3, AE3/4, and AE4.

Eventually, in a monetary reform of 347, the greatly diminished nummus was replaced with a coin that usually is called a centenionalis, for it was introduced at a time when Rome was celebrating its 1,100th anniversary. The earliest examples of these coins also had a silver coating.

We’ll round out this survey with the remaining silver coins of the empire, the siliqua and the miliarensis, both of which were introduced by Constantine I ‘the Great’ (307 to 337).

The siliqua was equal to Diocletian’s argenteus, being of similar purity and weight. But unlike the argenteus, the siliqua was struck on a broader, thinner planchet, which gave it a more substantial appearance.

Also, economic conditions had changed enough since the age of Diocletian that the siliqua did not suffer the fate of the argenteus. Instead of being a short-lived and ineffective coin, the siliqua was very widely used and was struck well into the mid-fifth century.

In 335 or 336 the weight of the siliqua was reduced from its original 1/96th of the Roman pound to 1/144th of the pound. It remained there – theoretically – for at least a century, though it is not unusual to find underweight siliquae from later periods (and even some fractional siliquae). It also was common for siliquae to be clipped to remove silver.

The weight of the miliarensis was a bit erratic, but is thought to have been targeted at two levels: 1/60th of the Roman pound for the heavy version and 1/72nd of the pound for the light version. Some consider the miliarensis a coin, and others a medallion, but the difference may be inconsequential. The fact is, they were struck in reasonably large quantities and they circulated alongside siliquae, even if – perhaps – they were struck for ceremonial reasons.

A final mention is given to silver medallions of the late Roman Empire. Though very rare and not strictly coins, they usually were struck as multiples of siliquae or miliarenses, and they often entered circulation as silver coinage.