By Hubert Walker for CoinWeek ….
On Sunday, December 29–the fourth night of Hanukkah–the Israel Antiquities Authority (IAA) announced the discovery of seven Islamic gold coins dating back to the seventh century. The find was made at a large site southeast of the town of Yavne (Tel Yavneh) in the center of Israel during an IAA-funded archaeological survey for proposed residential construction. Marc Molkondov, a longtime archaeologist with the IAA, initially found the coins and pointed them out to Liat Nadav-Ziv, co-director of the excavation along with Dr. Elie Haddad. The coins were then examined by Dr. Robert Kool, an IAA numismatist specializing in ancient coins, who dated the specimens to the early Abbasid dynasty of the ninth century.

One of the seven coins is a gold dinar issued under the famous Abbasid caliph Harun Al-Rashid, who reigned in Baghdad from 786 to 809 (the area that comprises the modern state of Israel was under Abbasid control from the eighth through the tenth centuries). While perhaps most famous in the West for his role in the fictitious One Thousand and One Nights, Harun-Al-Rashid presided over what is known as the apex of the cultural and intellectual Islamic Golden Age, which was a major influence on the later European Renaissance. Incidentally, this coin was discovered by itself on the third day of Hanukkah, leading to the uncovering of the remaining pieces.

The other six coins are gold dinars issued by the Aghlabid dynasty in and around Tunisia in North Africa. The Aghlabids were a vassal state of the Abbasids who, by the ninth century, were issuing coinage in the names of their own rulers.

Aghlabid coins are rare, and it is unusual to find them so far afield. Coins issued by the Abbasid dynasty are not necessarily rare, though Abbasid gold coins are, according to Dr. Kool. 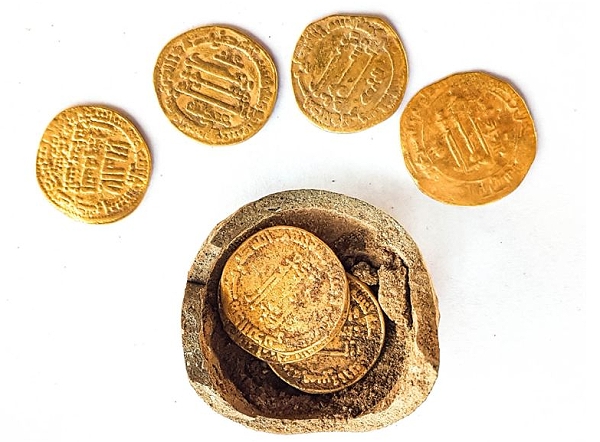 According to the IAA, the site was the location of a large-scale pottery-making operation that may have been in operation for centuries, from the seventh through to the ninth centuries. An export winery dating back to the fourth and fifth centuries BCE was also located on the site. The history of the city itself goes back to the Bronze Age, and is known as the Philistine town of Jabneh in The Bible.

The very existence of the coins helps prove that the production at the site was intended for export and trade. At the time the pieces were minted, gold coins were not in circulation in the West but they were used for trade with the Islamic East, where such coinage did circulate.

And because Islamic coins include specific information about the mint where they were struck and the year in which they were manufactured, they are quite useful to archaeologists working in the Middle East where dating the layers of a site can be a daunting task.

Some in the media have speculated that the coins were the savings of a potter and that, because they were found in a small clay pot or jug near one of the kilns, they were kept in something like a “piggy bank”. While this may be possible, the IAA noted that the seven gold coins all circulated simultaneously and therefore do not represent the kind of date spread that archaeologists usually see when dealing with a hoard.