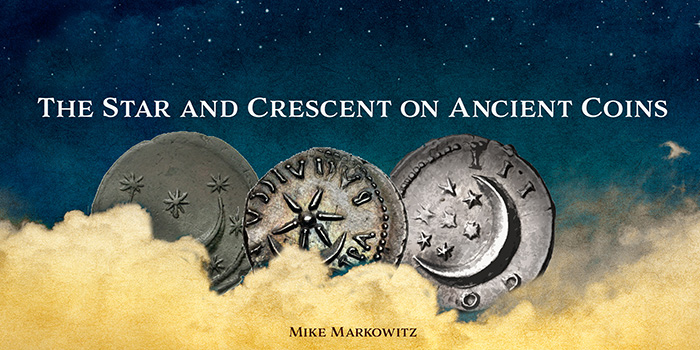 OUR MOON IS solid, not transparent. So it is impossible for a star to appear between the points of a crescent moon. But ancient artists did not care about this, even if they understood it. Because the orbits of the Earth, the Moon and the planets all lie in nearly the same plane, a bright planet or star can appear very close to the Moon (what astronomers call a “conjunction”) or even be eclipsed by it (an “occultation”[1]).

Living in a world without electric lights, most ancient people were much more familiar with the night sky than we are, and the stars and planets were very important to their view of the universe. Many believed that events in the sky were closely linked to events on earth; a belief that developed into the pseudo-science of astrology. In Sumerian cuneiform writing, a star and crescent is the ideogram for “incantation” or magical spell.

In Egyptian hieroglyphics, a star below a crescent forms the symbol for “month”. The Nebra sky disk[2], a bronze artifact inlaid with gold and dated to c. 1600 BCE, is one of the earliest representations of a crescent and stars in Western art. Found in Germany in 1999, its purpose is uncertain.

At least four different Greco-Roman goddesses had a lunar connection: Hecate, Selene, Artemis (Diana), and Aphrodite (Venus). The star and crescent appears as a powerful symbol with many meanings, and it is often found on ancient coins.

The best-known crescent moon on an ancient coin is a small symbol behind the shoulder of the owl on the reverse of the silver tetradrachm of Athens, a popular trade coin accepted for centuries and widely imitated across the Mediterranean world. The crescent first appears on the coins shortly after Athens’ victory at the Battle of Marathon, fought beneath a waning moon (August or September 490 BCE). The crescent may also recall the crescent formation of the Greek ships at the decisive Battle of Salamis (September 480 BCE).

Tarentum, a prosperous Greek city on the heel of the Italian “boot”, issued a tiny silver trihemiobol (0.78 g) c. 450 – 380 BCE showing a distaff (a tool used in spinning thread, symbolic of the local wool industry) between two stars and a crescent. In a 2005 Swiss auction, this rare piece realized $705 USD[3]. On the more common and even tinier hemiobols of Tarentum (c. 325 – 228 BCE), stars and pairs of crescents, back to back, are the only designs on both sides of the coin.

The small town of Uranopolis (“sky city”) in Macedon was dedicated to the sky goddess Aprhrodite Urania. On its bronze coins (c. 300 BCE), the goddess appears seated on a celestial globe. The star and crescent are depicted on the reverse, in a pattern that will be repeated on coins for centuries to come: the “horns” of the crescent point upward, and the star is a pellet with six or eight rays.

The Greek city of Byzantium (which would become Constantinople in 330 CE, and, Istanbul after 1453) adopted this symbol on its coinage in the first century BCE. According to legend, in 340 BCE, when Philip of Macedon (father of Alexander the Great) besieged Byzantium, the appearance of a sudden light in the sky warned the defenders in time to prevent a surprise night attack on the walls. In gratitude to the lunar goddess Hecate, the city placed a star and crescent on its local coinage. This custom continued well into the Roman era.

A striking bronze uncia of the Roman Republic[4], c. 217 BCE depicts Sol, the sun god, with his crown of rays on the obverse and a crescent with a pellet and two stars on the reverse. To modern viewers, this is amusingly familiar as a “happy face”, but ancient Romans might not have made the same association.

The combination of an obverse image of Sol with a star and crescent reverse appears again on a silver denarius of 74 BCE issued by L. Lucretius Trio[5]. On this coin, seven stars accompany the crescent. The most visible cluster of seven stars is the Pleiades[6], important to ancient peoples because its appearance above the horizon marked Spring planting and Autumn harvest seasons. Occultations of the Pleaides by the moon occurred in October and December of 75 BCE, and would have been noted by Romans of that time. The design with just five stars appears again on silver[7] (and rare gold issues[8] of P. Clodius Turrinus) on 42 BCE.

Mithradates VI[9] (135-63 BCE), King of Pontus in Asia Minor, was one of the most determined and resourceful enemies who ever fought the Roman Republic. In the year he was born, a comet appeared in the constellation of Pegasus. A fourth-century historian reported that it “burned so brightly for 70 days that the entire sky seemed to be on fire.”

Defeated in battle repeatedly by Roman armies, and faced with a rebellion by his own son, Mithradates killed himself in 63 BCE.

The kingdom of Mauretania, in what is now Morocco, Algeria and Tunisia, became a Roman client state in 27 BCE. King Juba II (c. 52 BCE – 23 CE), who had been raised and educated as a royal hostage in Rome, married Cleopatra Selene II (40 BCE – 6 BCE), daughter of Cleopatra and Mark Antony. A silver denarius of Juba bears his portrait on the obverse with a Latin inscription, and a star and crescent on the reverse, with the Greek inscription “Queen Cleopatra”[12]. Since Selene was a moon goddess, the symbol is a reference to her name.

Many Roman emperors took astrology seriously; some even employed court astrologers. Beginning with the first emperor, Augustus, the crescent symbol with one or more stars appears repeatedly on the coinage[13], probably at times when significant lunar events were observed and taken as favorable omens.

A denarius of Hadrian c. 127 CE[14], shows the star and crescent above a pellet, another c. 128 CE shows the crescent with the familiar cluster of seven stars[15]. Because the moon was associated with various goddesses, the symbol also appears on coins of empresses, notably a posthumous bronze honoring Faustina (died 141 CE), the wife of Antoninus Pius[16].

On the CoinArchives Pro database, which documents nearly four million auction results, a search for “star and crescent” produced 9,721 hits. A brief survey like this can only scratch the surface of this vast and complex subject. The star and crescent is a recurrent symbol on coinage of the Persian Sassanian Empire and, following the Muslim conquests, it became a widely recognized symbol of Islam. But that is a story for another day…