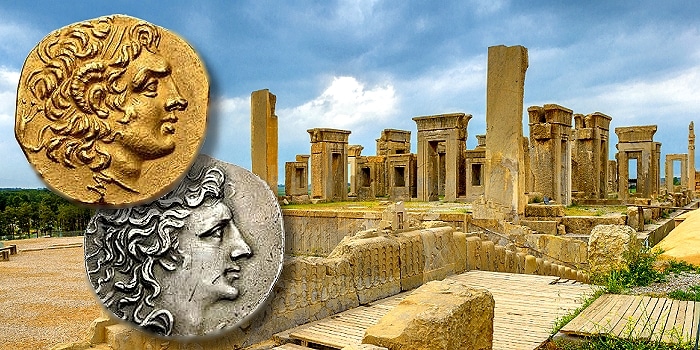 Mithridates VI Eupator (b.120 – d.63 BCE) was born into Pontic royalty under an auspicious sign. Justinus relays, in his recounting of Pompeius Trogus’s Historiae Philippicae, the story of how two comets lit the night sky for 70 consecutive days. This event was memorialized in a series of small bronze coins struck from 119 to 100 BCE. On the obverse, an eight-pointed star is superimposed on top of a right-facing horse head, while a 12-rayed comet is shown.

When he came to the throne, Mithridates’ kingdom was centered on Sinope and covered most of the Black Sea’s southern coast. Mithridates followed his father’s expansionist conflicts with the Bosporan Kingdoms and nearby Scythian tribes and proceeded to conquer almost the entirety of the Black Sea coast, central Galatia, and Armenia Minor. These territories were to be either directly ruled territories or subordinate kingdoms under his suzerainty. Initially, during the First Mithridatic War (89-85 BCE), the king completely outfought and outmaneuvered the Romans, which resulted in the occupation of the entire Roman province of Asia. Mithridates infamously ordered 80,000 roman citizens living in the newly conquered Anatolian territory to be put to death. This order provoked the Romans, who sent the consul P. Cornelius Sulla into the region with orders to crush all Pontic forces.

Eventually overwhelmed by Roman forces, Mithridates was forced to agree to the Treaty of Dardanos. The terms stated that Pontus was to relinquish the conquered territories of Greece, Bithynia, Phrygia, Paphlagonia, and Cappadocia as well as pay two thousand talents from the royal treasury. An additional 20,000 talents were to be paid by the recaptured provinces.

In an ongoing effort to style himself as a true Hellenistic king, Mithridates struck a series of staters that depict the diademed head of Alexander the Great wearing the horn of Ammon. Struck both in the name and style of Alexander’s general and the Thracian king, Lysimachus, these coins are a dramatic political statement. Mithridates was not only drawing a line between himself, Lysimachus, and Alexander the Great but was also staking claim to the Diadochi’s Thracian territory.

These staters were struck directly in periods of intense coinage production that occurred in Pontus from 93-89 BCE before and during the First Mithridatic War. Interestingly, Mithridates III also used his coinage in a similar way, by striking staters imitating those of Alexander. While only two examples of these early Pontic staters exist, they hint at a larger overarching trend of early Pontic forays into Hellenistic imagery. In fact, there is some evidence, as suggested by numismatist Brian McGing in his paper “Mithridates VI Eupator: Victim or Aggressor?”, that Mithridates VI may have invited Greek engravers to help create his coinage as part of his concerted effort to align himself with Alexander the Great. In fact, to demonstrate his prowess and skill at both generalship and kingship, Justin reports that before the First Mithridatic War, Mithridates announced to his troops that he was descended from both Alexander the Great and his general Seleucus – as well as the Persian kings Cyrus and Darius the Great.

The trend of highly political imagery continues in the silver coinage of Mithridates. The kings’ mints produced two main groups of tetradrachms during his reign. Firstly, he struck a series of tetradrachms that closely followed the established stylistic precedent of posthumous Alexandrian tetradrachms. Initially, these coins were very similar to the standard Alexandrian issues, as can be seen on this example struck during the First Mithridatic War. On the obverse, Mithridates is depicted as the deified Alexander wearing the skin of the Nemean lion. The obverse shows a seated figure of Zeus holding an eagle between the legend BAΣIΛEΩΣ AΛEΞANΔΡOΥ.

As time passed, the obverse portrait began to shift and became more recognizably Mithridates. He was dropping the guise of Alexander III. The reverse, however, remained the same. It is possible that this trend represented the king distancing from Alexander, or more likely it was the age-old drive of monarchs to stamp their own image into the zeitgeist of their kingdom. This latter type was mainly produced during the period leading up to the Second Mithridatic War. These vast emissions were meant to satisfy Mithridates’ need for liquid cash to pay for his massive armies and they were often poorly struck with areas of flat striking.

In certain varieties, the lion skin worn by Mithridates tends to blend into the King’s distinctive flowing hair, as seen on the example below.

The second main family of tetradrachms produced during Mithridates’ lifetime shows the diademed head of the king with flowing hair, a prominent nose, and a large chin. There are no obverse legends on this type, which forces the image of the king into even more prominence. On the reverse, the devices are encircled by a complex Dionysiac wreath of ivy and fruit. The reverse legends vary, with two main groups. They read BAΣIΛEΩΣ / EYΠATOPOΣ and BAΣΙΛEΩΣ / MIΘPAΔATOY / EYΠATOPOΣ, respectively.

Both types include a star and crescent motif. The standard identification of this device is as a Pontic royal symbol. It is possible that, as the German historian and numismatist G. Kleiner believed, the star and crescent combo represented the night and day as well as a local deity, Mēn. An apt interpretation, since Mēn was a lunar god indigenous to western Anatolia. If this is correct, then Mithridates would be harkening to his Pontic heritage.

It is also likely that the star references the Perseus myth in a similar fashion to the famous Macedonian sun.

The last element in the design of this series is the animal depicted on the reverse. The example above shows a Pegasus, which was used mainly from 96-88 BCE. Pegasi were also intimately connected with Persians. Persian kings claimed Perseus as their progenitor since the first Pegasus was born when Perseus slew Medusa. Examples with the Pegasus also have a more individualistic portrait of the king.

The second animal used was the stag. As one of the main symbols of Artemis, it is thought that Mithridates changed this piece of iconography due to the shifting focus of his international relations. Near the start of the First Mithridatic War, when the shift occurred, the king had begun a series of military campaigns in western Anatolia. The portrait style also became more stylized, and increasingly similar to that of Alexander the Great.

Interestingly, Mithridatic coinage was not dated until 96/5 BCE. The dating scheme was delineated both by year, placed over the right-hand monogram, and month at the bottom in exergue. For example, this piece struck just before the Third Mithridatic War has the year BKΣ (Pontic year 222) in the right-hand field with the month I (Pontic month 10) in the exergue. As a result, we know that this coin was struck in Pergamon in July 75 BCE.

In 63 BCE, the Third Mithridatic War ended with Rome gaining total control over both the Pontic Kingdom and the Seleucid Empire and with the Kingdom of Armenia becoming a client state. Shortly thereafter, Pharnaces II, Mithridates’ younger son, led a rebellion that prompted the fallen king to attempt suicide. Due to his history with poisons (he wasn’t known as the “Poison King” for nothing), the attempt failed. In the end, Mithridates needed his bodyguard to kill him with a sword.