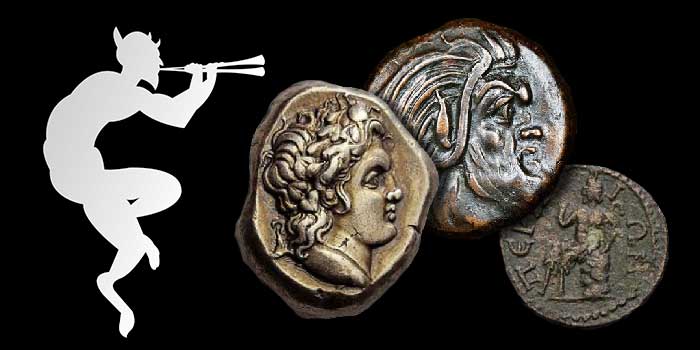 First appearing during the early sixth century in Arcadia, a wild mountainous region centrally located in the Peloponnesian peninsula, the Greek god Pan served as a deeply important religious figure. As the god of the wilderness, fields, sex, shepherds, panic, and hunters, this multifaceted the god served as a liminal figure. Pan connected humanity with the wild. He offered us a mirror in which the ancients could observe their base nature.

While many gods appeared on ancient Greek coins, Pan provided ample fodder for mint workers who displayed his many aspects regularly on the region’s coinage.

Like most Greek gods and goddesses, Pan’s imagery shifted over time until finally his ancient worshipers endowed him with a multitude of powers and responsibilities. While some gods held only one or two origin myths, Pan’s story slowly morphed until “some 18 variants” existed concurrently (Brown, 58). For several centuries, sources focused on the god’s “role as agent, guardian or attendant” to other nature deities, hence his depictions as a wild satyr with cloven hooves, long hair, and goat horns (Brown, 57). An archaic tetradrachm of Thrace minted between 453 and 451 BCE, depicts the god in his satyr form on the reverse, directly beside a goat, invoking his role as shepherd.

Interestingly, the earliest coins from Pan’s Arcadian homeland that depict the god, minted in the mid-fourth century BCE, portray him as a handsome youth with small horns and flowing hair. While almost a thousand miles away, contemporary coins from the Crimean city of Panticapaeum depict the god as a wild beast.

As the god’s cult spread, this dichotomy–between youthful and aging, beautiful and bestial–in how Pan’s worshipers viewed him persisted. “Half human, half animal”, the god’s “duality” straddled the wild and the domesticated. Pan’s “heavenly and base” nature instilled an opposing polarity in his various roles, which lent themselves to overlapping imagery (Kantzios, 23). For example, in the western Anatolian region of Mysia authorities minted electrum staters portraying Pan as an ugly yet youthful satyr.

Unlike modern depictions of divinity, Greek gods could evolve. And because of his conflicted nature, Pan changed more than most.

As civilization evolved and progressed, humanity’s conceptualization of wilderness and unknown places shifted. During the pre-Hellenized Greek world, “the wilderness was understood as a harsh and dangerous place”, and later as Alexander the Great and the Diadochi shook the world, nature slowly began to be “viewed with great affection” (Kantzios, 24). Interestingly this shift in attitude occurred again in the early modern period as civilization recovered from the Black Plague and gradually reclaimed reforested land over the 16th and 17th centuries, culminating in the transcendentalist movement of the 19th century, with poets like Ralph Waldo Emerson and the Hudson School of painters.

Like the transcendental movement, Pan’s evolution did not occur as a response to an “alteration of … fundamental traits”, but a shift of focus to certain aspects of Pan’s divine nature in order to “bring him closer to human life and the workings of the polis” (Kantzios, 33). Ancient authors began playing up Pan’s amorous nature and slowly disregarding the “element of fear” that for so long played a fundamental role in his worship and mythic nature. As demonstrated on this silver triobol from the Arcadian League, by the second century BCE Pan appeared on coins mainly in a fully human form, as a departure from the earlier satyr iconography. In fact, the god slowly begins to appear “charming, benevolent and downright urbane” (Kantzios, 35).

Following shortly after this artistic shift, came a political one.

While borrowing from Greek culture which they both respected and disdained, Rome adapted and modified the Olympian pantheon for their own use. Pan suffered more than most. Slowly the Romans reverted the god back to his wild and base nature, until he became a “representative of paganism and the personification of all nature” (Fisher). This regression is demonstrated by a late Roman Republican denarius minted in 48 BCE that shows the god’s animalistic side. Minted by the Vibius-Pansa family, in reference to their name, this depiction is rather grotesque. (Denarius)

In the process of creating their own pantheon, Rome replaced Pan with several different gods, mainly Faunus, which led to a general decline in the usage of his imagery on Mediterranean coinage (Pan).

During the reign of Roman emperor Tiberius, a Greek sailor named Thamus received a divine message, that when he reached port he was to “announce that Great Pan is dead” (Plutarch, 402). Pan is the only Greek god to actually die. While this story comes mainly as a theological answer as to why many Greek oracles seemingly stopped functioning, G. K. Chesterton equates the death of Pan with the birth of Christ. When Chesterton talked about “Mythology” and “Theology”, he meant the death of paganism and the birth of Christianity.

While this proclamation certainly did not mean the end of cults dedicated to Pan, it ties into the trend of declining worship of the god and the reduction in the number of coins minted with his image. Ultimately, though, the Romans could not seem to completely reject using the image of the satyr god on their coinage.

The god continued to occasionally appear on Roman Imperial coinage for centuries. Later examples include a triassarion minted during the regency of Julia Mamaea during Alexander Severus’s childhood depicting a nude seated Pan in his human form with his divine symbols of power and an AE 22 of Trajan Decius on which Pan appears in his satyr form.

Since depictions of Pan on ancient coinage span almost an entire millennium, literally hundreds of varying designs exist in bronze, silver, and gold denominations. Therefore, it is possible for collectors of all experience levels and budgets to add the god of shepherds, sexuality, wilderness, and panic to their collections.

A nice variant of the silver Pansa denarius referenced above is in the October 2, 2020, Bertolami Fine Arts auction starting at only £20 GBP.

Similarly, the bronze AE from Panticapaeum above (and others like it) can be obtained for $70-100 USD.

On the other end of the spectrum, a high-quality tetradrachm from the Kingdom of Macedon featuring a bust of Pan centered on a Macedonian shield costs around $1,000-1,500.

Sources for “The Life and Death of Pan and His Coins”