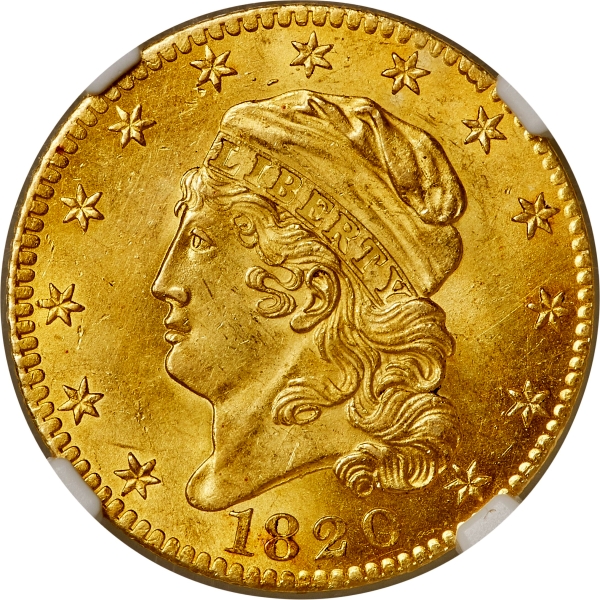 Nine 1820 half eagle varieties exist to challenge collectors. Four of those die marriages have a Square Base 2, and five varieties feature a Curved Base 2. Despite a large total mintage of 263,806 pieces, only one variety (BD-3) can be considered somewhat available. All other 1820 varieties are either rare or very rare. The Heritage Auctions October 7-10 Long Beach Expo US Coins Signature Auction features an example of the Square Base 2 variant, from the exceedingly rare BD-4 variety. It represents the ultimate in rarity among 1820 half eagles. In sheer number of coins known, the 1820 BD-4 equals or exceeds all varieties for rarity within the lengthy Capped Head to Left series (1813-1834). It rivals even the legendary 1815, 1822, and 1828/7 in the sheer number of pieces that exist.

To our knowledge, only Harry W. Bass, Jr. successfully assembled a complete variety set of the nine 1820 die pairs. The BD-4 die marriage is the unquestioned stopper for such a set, and it is largely viewed as uncollectible. To date, only two pieces are known, and one of those remains part of the Harry Bass Core Collection, housed at the ANA Money Museum.

The coin in our Long Beach auction is the only other known example, and it is the only example of this rare die pair available to today’s collector. This is the former Norweb coin, which was acquired from J.C. Morgenthau on June 13, 1936. Any earlier history of the BD-4 variety is unclear, as might be expected for a gold coin of its rarity. This coin is a spectacular Select Uncirculated example, with glittering sun-gold surfaces and a razor-sharp strike. Star 1 is distant from the bust, and star 13 is close to the curl (but does not touch). A triple dentil is seen near star 9. The coin represents Bass-Dannreuther die state c/b. The 5 in the denomination sits higher than D, which tilts left. A few wispy hairlines are seen under magnification, yet the surfaces are refreshingly free of other abrasions or meaningful marks. Brilliant mint luster radiates from fields that display pleasing areas of reflectivity.

This is assuredly one of the rarest coins in this auction and the only BD-4 example available now or in the foreseeable future. Capped Bust half eagle specialists are sure to recognize the importance of this offering and bid accordingly.