Heritage sale claims $5.8 million; I remember the day man walked on the moon

The Summer FUN is in the books and the Heritage Signature Summer FUN auction is complete.

As is usually the case, the summer FUN installment in the Sunshine State is much more lightly attended compared to the throngs — many escaping from the frozen north — migrating to the winter edition. Still, considering it is vacation time for many collectors and dealers, the Orange County Convention Center in Orlando was quite busy.

Even on Saturday — closing and getaway day — the convention center bourse was still quite lively, one expert who was there told me. My acquaintance said parking was easy to find when he arrived 20 minutes after the scheduled bourse opening for the public on Saturday morning, so he assumed he would find a ghost town inside.

After making the trek through the maze of the convention center complex, however, he found that the public seemed enthusiastic about doing business with the dealers who had not pulled out already.

“Two and a half hours later, I had been able to thoroughly explore the entire show and conduct the purchases I wanted,” my associate reported.

Interestingly, but not all that surprising given the current market, a common refrain heard on the bourse was that the prices for many coins were too high and most sellers were unwilling to negotiate much.

Well, for those who wanted to buy coins at their price, there was the Heritage Signature auction, which pulled in a little over $5.8 million.

The following is a quartet of quality NGC selections that I think were very good values.

A wonderfully preserved 1798 Draped Bust Dollar, a Large Eagle, Pointed 9, Close Date graded NGC AU 55, claimed $16,800. It’s a truly exceptional example of a Draped Bust dollar, possessing a relatively bold strike and endowed with wonderful concentric rainbow effects on the obverse. Interestingly, the coin has appeared at auction only twice since its initial appearance in 2008. Given such sparse public opportunities, the coin has advanced in price each time since it was bought for $10,925 at the 2008 Summer Long Beach sale.

The highly popular 1932-S Washington Quarter graded NGC MS 66 pulled in $13,220. This inaugural San Francisco Mint coin also has the distinction of being the lowest mintage Washington Quarter. Although in higher grades this coin is eclipsed in the price guides by its brother Denver delivery, this NGC MS 66 is tied for the finest known numerically.

With only eight coins at this grade, I believe this San Francisco issue was a great value at this price. An exceptionally strong strike reveals bold details on Washington’s portrait, down to the locks of the peruke wig. A fresh, original appearance and an icy mauve and blue color also enhance the coin’s look.

Another wildly popular first year of issue was a 1916 Standing Liberty Quarter graded NGC MS 64 FH, which raced to $16,200. The rarest regular issue in virtual Gem condition of the short-lived series, the coin displays full-head details and always is a highly coveted numismatic commodity at this price point.

Although the NGC Census reveals 75 FH examples, a few grading points higher, the demand for this issue easily exceeds the modest supply of Mint Full Head coins that comes to market. This coin is rather regal in appearance, its almost satiny white matte-like texture accentuating its fully struck elements.

An 1880 Gold dollar graded NGC MS 68 sold for $6,932. It’s another very scarce coin. In fact, with only 1,600 business strikes minted in Philadelphia, if this were another series it would no doubt be an exceptional rarity. But although the mintage is minuscule, luckily for collectors many of the diminutive gold dollars were saved. Many were secured because gold coins were very popular gifts for birthdays and other occasions.

This explains why, of the 230 coins of this date on the NGC MS Census, only two appear in less than full Mint condition and even those two are graded NGC AU 58! Amazingly, the largest population is graded MS 67, with 62 examples. This coin is one of 24 in lofty MS 68 and, in a bit of a surprise, one coin is even MS 69.

It’s a truly flashy ultra-gem with as much frosty golden luster as a small coin can radiate! As one would expect, the coin is virtually flawless. I could only detect a single mark as an identifier on the obverse and reverse! Again, at this price point, these gold dollars are excellent values. 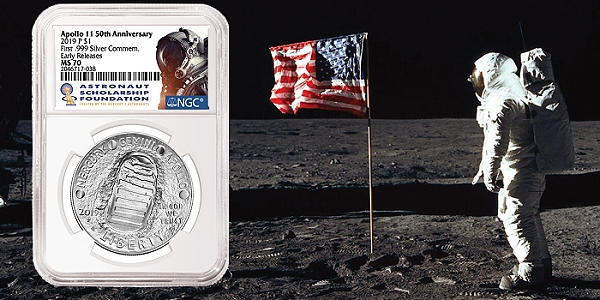 I can’t believe that as this article posts we are only a few days from the 50th anniversary of Apollo 11’s flight, the lunar landing of the Eagle and Neil Armstrong’s historic first steps on the moon.

In my lifetime, those few days following the launch of Apollo 11 in July 1969 surely rank as the most striking. Like a few other historical events, I can remember where I was and what I was doing when it occurred.

Apollo 11, the lunar landing and man walking on the moon still sends shivers up my spine. July 20, 1969, found me in front of the family television intently watching as Neil Armstrong finally stepped upon the cream-colored lunar surface and uttered those famous words, “One small step for (a) man; one giant leap for mankind.”

It was powerful stuff for this youngster to absorb and appreciate on that warm summer night 50 years ago. I remember it was overcast and we couldn’t see the moon that night, but my family and I — and I’m sure millions of others — each took a few steps outside and gazed up into the heavens, totally amazed to think someone was walking up there!

Of course, I have a numismatic recollection tied with the event.

Earlier that Sunday afternoon, I had attended the local monthly coin show held at the Meadowbrook Hotel in my hometown Portsmouth, New Hampshire. My major purchase that day was a complete and nearly uncirculated Roosevelt dime set housed in a blue Whitman folder, all for the princely sum of $7.50!

After I got home and was waiting patiently for the first steps on the lunar surface, I kept myself busy by taking a small soft gummy eraser to each of the dark and dirty Roosevelt dimes. I remember taking quick breaks looking up at the TV and watching Walter Cronkite and the rest of the Apollo 11 coverage.

Then, just after those first steps, I recall how “giddy” Mr. Cronkite was. Wow, it seems like just yesterday! And, oh yes, I still have that Roosevelt dime set, resplendent with mod “groovy” decals I applied to the cover.