Stack’s Bowers and Ponterio is pleased to announce details of their upcoming Hong Kong Auction of the Q. David Bowers Collection of Chinese Coins in Copper. This offering, presented in a stand-alone catalog, will be held Monday, April 2 at The Mira Hong Kong, 118 Nathan Road, Tsim Sha Tsui, Kowloon, Hong Kong. The collection is packed with exceptional rarities and highly desirable numismatic collectibles and is the culmination of decades of academic study and discerning accumulation.

The vast majority of this collection will be offered in one session beginning promptly at 9:30 AM Hong Kong time on Monday, April 2, starting with 66 lots of Ancient Chinese coins. Highlights from this section include highly desirable and extremely rare six-character (Lot 40022), five-character (Lot 40023) and four-character (Lot 40024) knives from the Warring States period. Also featured is a splendid offering of Hollow Handle Spades, Flat Handle Arch foot Spades and Square Hole Cash. Following the Ancient coin section is a comprehensive section comprising 206 lots of Provincial issues that contains many exceptional and condition census rarities. Highlights from this section provide just a glimpse into the advanced nature of this collection. The first numismatic treasures in this section include the legendary An-Hui “Fang Kong” square hole 10 Cash (Lot 40067), an “An-Hui” Pattern 5 Cash spelled “EIVE” (Lot 40068) and an “An-Hui” Flying dragon 10 Cash (Lot 40069).

A highly unusual pattern 10 Cash struck in Copper-Nickel from Chekiang (Lot 40090) is among only a couple known. 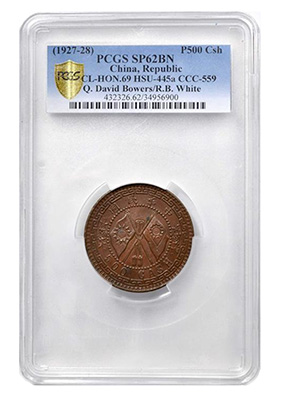 Lot # 40137 features an iconic Honan pattern 500 Cash, one of the largest coppers coins ever produced in China (both in denomination and size), but never issued. Copper coins of China are not normally considered works of art, however the fabulous style of the Hunan 10 Cash (Lot 40144) could certainly hold its own.

Pieces that may not be as recognizable as others are the Kiangsu-Chingkiang Pattern 20 Cash (Lot 40201), the only example in private hands with only two known, and the Kwangsi Pattern 10 Cash (Lot 40210) with only a couple known.

Other short-lived issues that never made their way into full production include the Kwangtung “Five Goats” pattern Cent dated Year 25 (1936) (Lot 40216), the Shantung pattern 20 Cash dated Year 22 (1933) (Lot 40225) and the legendary and highly sought after Szechuan 30 Cash (Lot 40247). Many other rare and interesting pieces will be found in this section.

An additional Internet only session of 74 lots of Chinese coins concludes the Q. David Bowers Collection of Chinese Copper Coins and will begin Thursday April 5, at 9:30 AM Hong Kong time (April 4, 6:30 PM PST).

Lot viewing will be available at the Stack’s Bowers and Ponterio Santa Ana office before the sale, as well as in Hong Kong immediately prior to the auction itself. Check StacksBowers.com for specific dates and times. And of course no announcement would be complete without a reminder that when you are ready to sell, Stack’s Bowers Galleries is your source for auction. The firm offers professional handling of your collection, with a proven track record of accomplished sales. Currently, consignments of ancient coins and world coins and paper money are being accepted for the August 2018 Hong Kong auction, the August 2018 ANA auction and the May 2018 Collector’s Choice Online auction. Contact a consignment specialist at (949) 253-0916 or via email at [email protected] or visit the Stack’s Bowers and Ponterio table located near the entrance at the Hong Kong Coin Show, which runs from Friday April 6 to Sunday April 8.